Another day, another batch of fresh Samsung phone rumors. This time they come courtesy of unnamed insiders who have spoken to Bloomberg, spilling details about the upcoming foldable phone.

Samsung has been working on flexible screen technology for years, but it looks like it is on the cusp of realizing a commercial product, with CEO DJ Koh hinting that it's only month away.

Some of the leaked details are confirmation of information that's already been suspected, like the codename, but there's also a lot of new tantalizing insights to dive into – so let's take a look.

The foldable phone has purportedly been given the codename of ‘Winner', which offers an insight into Samsung's hopes for the device. While there's obviously no way that this will be the final name it launches with, its clear that Samsung are banking on the device separating them from the pack (especially their rival, Apple).

A foldable phone would be a first, after all, and if it's a success, it'll leave the rest of the industry playing catch up while Samsung sprints ahead.

‘Winner' isn't a bad codename – the tech industry is littered with hundreds of makeshift monikers for development purposes. See if you can recognize any of the following; answers are at the bottom of the article: 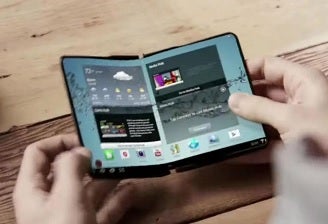 2. It Has a Second, Baby Screen

The Winner folds together, which means that when it's closed, the screen isn't visible. To tackle this, Samsung have apparently added a second, smaller 4-inch screen to the front.

This will apparently be used to check messages and statuses without having to constantly unfold the phone. This isn't anything new – back when the clamshell phone was king, it was a common feature for exactly the same reason.

Still, it's nice to see that the solutions for yesterday's problems are still just as relevant in 2018.

Insiders claim that the Winner is currently weighing in at 200 grams. That's not much in the grand scheme of things, but in a world where phones are getting thinner and lighter with every iteration, it could be a deal breaker for users.

For context, the Galaxy S9 weighs 163 grams, while even Apple's largest iPhone, the XS Max, is just 177 grams. Rumors are that Samsung is considering trimming the size of the battery to relieve the phone of some grams, which could mean a compromise when it comes to time between charges.

Changing the form factor from the modern phone's traditional black rectangle to a hinged device has caused Samsung's engineers some headaches, not least to do with the constant wear and tear as users open and close the phone.

Prototypes have been able to pass a test of being opened and closed over 200,000 times, although there are still concerns about how this will transfer to mass manufacturing.

Crafting a prototype in the lab is one thing, but recreating the design by the hundreds of thousands on the production line can lead to unforeseen problems.

Samsung will want to avoid any kind of large scale issues at any cost, especially after the headlines it gained in 2016 when a number of its Galaxy Note 7 phones exploded, prematurely ending the phone's production.

5. It Has a Special Version of Android

According to insiders, Samsung has been working alongside Google to develop a bespoke version of Android for the Winner.

This makes sense on paper – the revolutionary design of the phone means that it will have functionality not served by the stock Android OS. Getting this software right is vital for Samsung – if it's not smooth, responsive and easy to use, it could spell an end for foldable phones before they've even got off the ground.

First impressions are vital, and the operating system needs to be perfect.

When Will Samsung's Foldable Phone Be Available?

This is the big question on everyone's lips. When can we expect to get our first glimpse of the folding phone? Samsung has a developers conference starting on the 7th of November, and the company has been dropping some very heavy hints that the new phone could well make its debut here.

In a short animation promoting the conference on Twitter, a hinged line opens up like a book, and the slogan ‘Where Now Meets Next' appears. Tantalizing.

Even if the phone is unveiled this year, it's unlikely that it will be on store shelves until next year, most likely around the same time as the Samsung S10.

Answers to our Quiz: