The latest leak from the Samsung camp has hinted at big things for its next line up of phones, including design features which could send competitors scrambling back to the drawing board.

During an event for partners in China, the company made bold claims about its direction for 2019, and showed off tech that could smartly hide the selfie camera behind the screen itself. Together with a fingerprint reader built into the screen, this could be the kind of revolutionary tech needed to take the fight to Apple and other smartphone manufacturers.

It's not the first leak from Samsung, and it won't be the last. We look over what else has been hinted at in recent months.

What is the Latest Samsung Leak?

The leak comes to us courtesy of Twitter user Ice Universe (@universeice), who has something of a history of sharing phone leaks on social media. This leak is purported to have come from an event in Shenzhen, China, intended for a select group of attendees. One of those in attendance managed to surreptitiously snap some of the company slides, one of which in particular tells us a lot about what Samsung has in the pipeline.

The slides don't specifically reference the Galaxy S10, but with a projected timeline of 2019 (the likely release date of the S10), and covering the company's latest innovations, it would be surprising to not see some of these new features make it into Samsung's flagship phone.

With the Samsung S9 proving to be one of the best smartphones of the past year, yet still barely re-inventing the wheel, it feels like Samsung could well have been holding back for its 10th anniversary model. 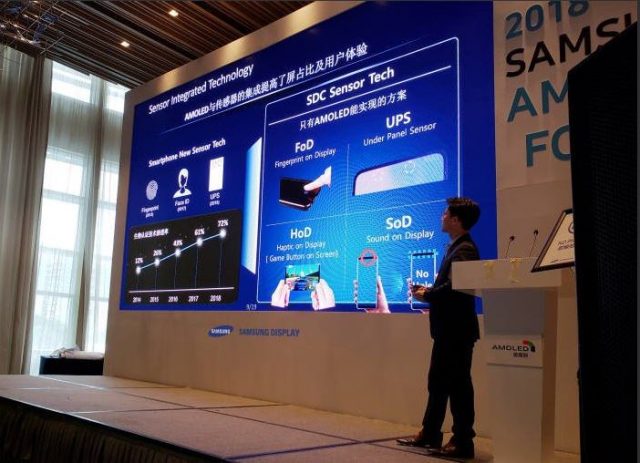 What Can We Expect from the Galaxy S10?

The slides point to some interesting features. Most notable of all are four acronyms: FoD (Fingerprint on Display), HoD (Haptics on Display), SoD (Sound on Display), and UPS (Under Panel Sensors). While some of these are already employed in their own and competitors' phones, there's still a good range of innovation on the cards.

Fingerprint on Display – With the rush to a bezel-less phone, screens have expanded to take up the entirety on a phone's front surface these days, meaning that the fingerprint sensor has been relegated to the rear of the device in many cases. That's where it currently lives on the S9, but the leak hints that it could well return to the front again, on the actual screen itself. Apple ditched the fingerprint sensor with its latest phone and moved security to facial recognition unlocking instead, so if Samsung can crack it, we'll be impressed.

Haptics on Display – Haptics are essentially the little buzzes and vibrations you feel when using your phone for different functions. They're a way of providing feedback outside of sight and sound about the changes you're making with your fingers. They already exist on phones, but there are varying degrees of haptic technologies. The ultimate end-goal for the tech is to physically change the screen's shape on demand. Prototypes exist, but whether or not this can be achieved on consumer-level devices remains to be seen.

Sound on Display – As with the fingerprint sensor, another block to the dream of a bezel-less future is a phone's speakers. Though they are pretty much an essential component of any mobile phone, housing competent speakers in a sleek phone can represent a design challenge. SoD technology could well make physical speakers a thing of the past, as it uses the phone's surface as a integrated speaker. Samsung have shown off this technology before, so it's not too much of a stretch to imagine seeing it in the S10.

Under Panel Sensors – This is the big one, and a solution to a prevailing issue for phone manufacturers. While it might be accidentally iconic, the ‘notch' – the black section that intrudes on the screen of modern phones to harbor the camera – is divisive. While most have followed Apple's lead and copied the notch, others have come up with alternative solutions, such as Oppo's pop-up camera. UPS would allow Samsung to hide the camera under the screen itself. The benefits of this are a phone that's entire frontage is precious screen real estate. Being the first to implement this would earn Samsung some serious brownie points, and be a bloody nose for Apple. We know that Samsung have applied for patents for this technology in the past, so there's a very real chance we could see it implemented soon.

What all this points to is epochal design in the mobile space, which has been somewhat stale for the past few years. If the S10 integrated all of the above, Samsung would have a highly desirable hit on its hands.

What Else do we Know About the Samsung Galaxy S10

It feels like we know a lot about the Samsung Galaxy S10 already. The phone has suffered more leaks than a sieve on the Titanic.

Self-healing screens – If you have nightmares about fixing screen protectors, only for a particle of dust to stubbornly remain and mock you forever from your screen, then firstly, you're not alone, and secondly, you could be in luck. A patent from Samsung filed this year pointed to a ‘self-healing' screen that would repair daily scratches and scrapes caused to its surface. While it wouldn't protect the phone from more serious drops, it would still be a great selling point.

Foldable phones – Phones with foldable screens are nothing new, and the tech industry is littered with a thousand prototypes. Rumors point to Samsung getting serious about this technology though, with CEO DJ Koh suggesting in an interview with CNET that the company could be showing off devices this very year. Whether or not Samsung would choose to bestow its flagship S10 with a foldable screen remains to be seen, but there's no doubt that we're about to see a breakthrough in the technology at a consumer level.

Four models – Leaks seem to suggest that there will be four types of Galaxy S10, from an entry model with lower tech specs to an all-singing, all-dancing model with a 6.4-inch screen.

Five cameras – Yet another leak has shown that we can expect the S10 to have five cameras; three on the back, and two on the front. All these cameras aid the phone in achieving decent depth of field, high resolution zoom, and wide angles. And if you think five is excessive, there's a model about to hit the market with nine cameras – a veritable one-man paparazzi.

When Will the Samsung Galaxy S10 Launch?

Although the volume of leaks might make you think it's already out, the Samsung Galaxy S10 won't actually be in our hands until next year. Tradition dictates that the S-series Samsung phones drop in March/April time, and there's no reason to believe that the S10 will be any different.

Can't wait that long? The (still very respectable) Samsung Galaxy S9 has already dropped in price since launch, and is well worth considering if you're after one of the best smartphones for 2018.