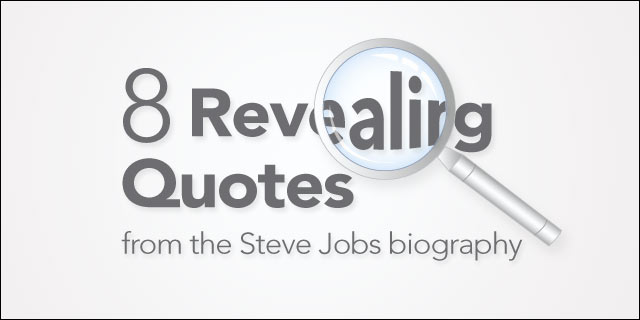 Walter Isaacson’s biography of Steve Jobs probably contains the seeds for a dozen other books about Apple’s late CEO, focusing on his “reality distortion field,” his design sense, his personal relationships, and other keys to his life and success.

But one of the most illuminating aspects of the book was the insight into how Steve Jobs thought, how his mind worked. In that spirit, here’s a (long-overdue) list of 8 striking quotes:

On reverence: Steve Jobs: “Every once in a while, I find myself in the presence of purity – purity of spirit and love – and I always cry. It always just reaches in and grabs me.”

On reality distortion: “It was in Jobs’s nature to mislead or be secretive when he felt it was warranted. But he also indulged in being brutally honest at times, telling the truths that most of us sugarcoat or suppress. Both the dissembling and the truth-telling were simply different aspects of his Nietzschean attitude that ordinary rules didn’t apply to him.”

On control: “This passion for perfection led him to indulge his instinct to control. Most hackers and hobbyists liked to customize, modify, and jack various things into their computers. To Jobs, this was a threat to a seamless end-to-end user experience.”

On respect: “Jobs was awed by Wozniak’s engineering wizardry, and Wozniak was awed by Jobs’s business drive. ‘I never wanted to deal with people and step on toes, but Steve could call up people he didn’t know and make them do things,’ Wozniak recalled. ‘He could be rough on people he didn’t think were smart, but he never treated me rudely….'”

On Buddhism: “One topic they wrestled with was [Jobs's] belief, which came from his Buddhist studies, that it was important to avoid attachment to material objects. Our consumer desires are unhealthy, he told her, and to attain enlightenment you need to develop a life of nonattachment and nonmaterialism.”

On art and technology: Steve Jobs: “I’m one of the few people who understands how producing technology requires intuition and creativity, and how producing something artistic takes real discipline.”

On leadership: “‘Steve Jobs’s ability to focus in on a few things that count, get people who get user interface right, and market things as revolutionary are amazing things,’ [Bill Gates] said.”

On drive: “Jobs told Egan, as he had a few other friends, about his premonition that he would not live a long life. That was why he was driven and impatient, he confided. ‘He felt a sense of urgency about all he wanted to get done,’ Egan later said.”