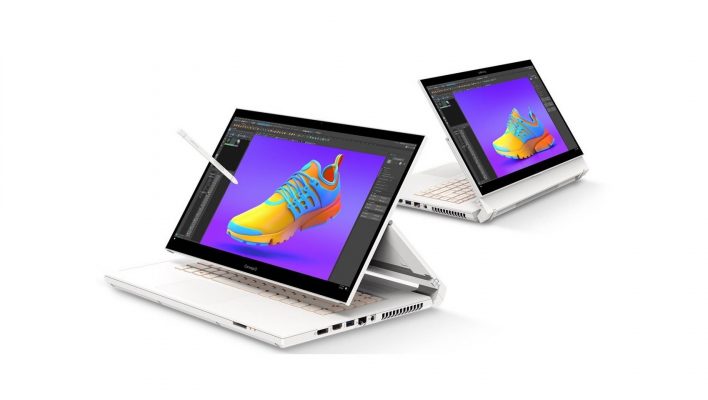 Acer has taken to CES 2020 to announce its latest laptop line-up, from high-end models aimed at demanding designers, to more everyday models with more modest specs and price.

The star of the show for Acer has to be the attention grabbing ConceptD Ezel range, with its eye-catching white chassis and highly manoeuvrable display. And that's before you even get to the impressive specs. Then there's new laptops for the Spin and TravelMate series, which aren't quite as out there, but still improve on previous iterations and offer the latest specs.

We take a look at the newly announced line-up.

The ConceptD 7 was first announced by Acer last year, as an addition to its laptop range. Marrying power and design, and aimed at those looking to use their laptop for creation, rather than spreadsheets, it's fair to say that the ConceptD was Acer's take on the MacBook. For 2020, Acer has added two new laptops to the line up – the Ezel and Ezel Pro.

As the name might suggest, the key to the Ezel is flexibility. The screen can move and be positioned in a variety of ways. While it's not removable, it does allow for a degree of movement that should ensure that even the most fussy of creators can find the positioning that's just right, whether it be flat, tented, or even suspended above the keyboard in a Z shape, allowing the user to work top down on a flat screen, while still having access to the keys.

Design wise, Acer has gone with a rather attractive white body, and an orange glowing backlight. It definitely stands out from the legions of black laptops out there. There aren't many rounded or tapered corners to be found here – the construct is slightly boxy, in part to accommodate the screen stand, which flips out when not in traditional laptop mode. The ConceptD 7 Ezel houses a stylus in its chassis (Wacom EMR pen), as you'd probably expect for a device aimed at designers and artists.

See our guide to the Best Laptops for Designers

Boasting a 4k display with 3840 x 2160 resolution, the screen on both models is constructed with Gorilla glass, to protect it from unfortunate drops. It also has an anti-glare coating, mitigating screen shine, like you might get when using a laptop outside.

The Ezel comes in two flavors – the standard ConceptD Ezel 7, and the Concept D 7 Ezel Pro. The difference between the two comes down to specs. The Ezel 7 features a 10th-gen Intel Core H-series processor, NVIDIA GeForce GPU, up to 32GB RAM and up to 2TB SSD. The Ezel Pro is similar, but instead offers an Intel Xeon E processor and NVIDIA Quadro RTX GPU. 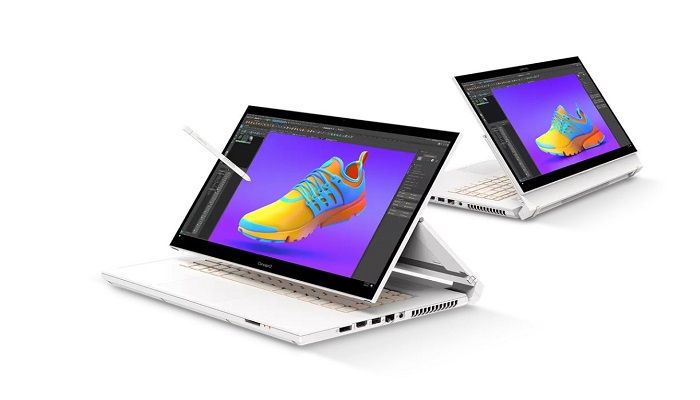 For those that want the features of the ConceptD, but don't want to stray too far away from their desk, there's the ConceptD 700 workstation. Like the Ezel laptops, it has a unique design, with a white, rounded body, and woodgrain design top – which by the way, doubles as a wireless charger for your phone. There's also a pop-out headset cradle, that can be tucked away when not in use.

Under the hood you'll find an Intel Xeon processor, NVIDIA Quadro RTX GPU and up to 64GB RAM. Naturally there's a built in SSD, but the workstation also comes with empty storage bays for future expansion. 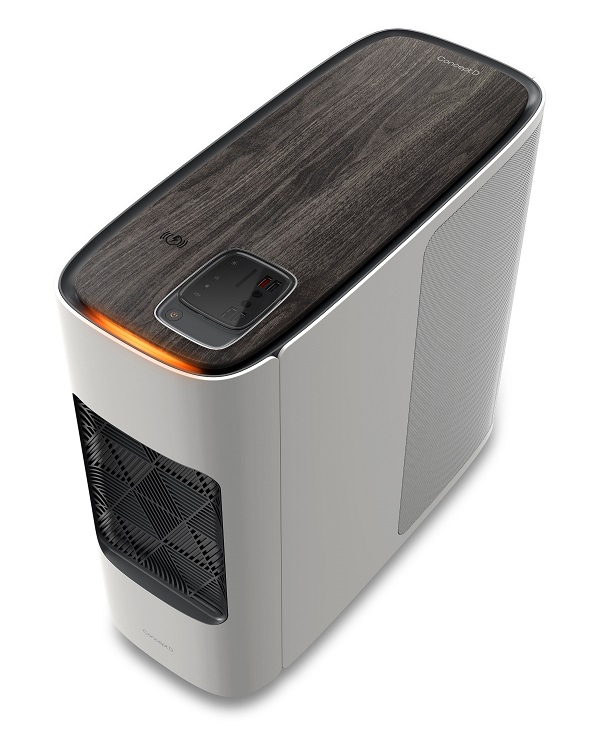 Acer's long-running Spin series is getting a couple of new upgrades in the Spin 3 and Spin 5 models. So named thanks to the fact that the displays can rotate and be positioned in a variety of ways, the Spin series offers more flexibility than your average laptop.

The new Spin 3 and Spin 5 iterate on the formula, rather than reinvent it, but if you've been holding out on a new laptop and have had your eye on an Acer Spin, now could be the time to go for it.

Given its flexibility, the Acer Spin series is bound to appeal to creatives, so it's no surprise to find that there is a stylus included. The Acer Active Stylus is stored in a dedicated dock, meaning that you won't have to resort to fishing in the bottom of your bag for it. It can be used for 90 minutes after just a 15-second charge, so you won't be left twiddling your thumbs between sketches as you patiently wait for it to come to life. The Spin 5 is also compatible with Acer's more advanced stylus, but you'll be charged extra for that.

Both models have undergone a little cosmetic surgery, making them slimmer. The 13.5-inch Spin 5 is now 14.9mm thick, compared to the 16mm of its previous form factor, and weighs 1.2kg. The 2K touch display is surrounded by a thin, 7.78mm bezel, giving users an 80% screen to body ratio. It also features a fingerprint reader as standard. Battery life is around 15 hours, with a 30 minute charge netting around 4 hours battery life. 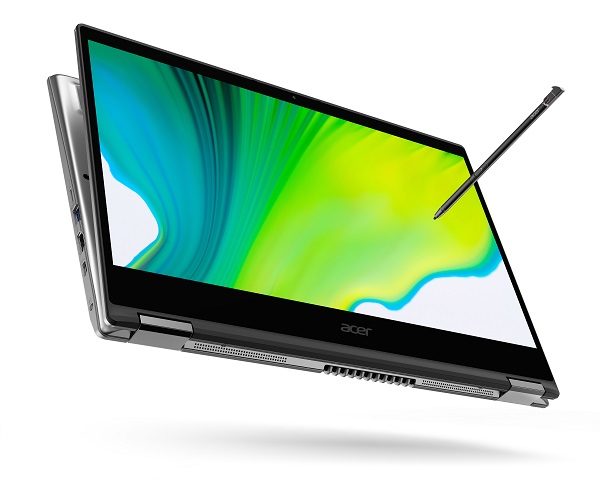 Both the Spin 3 and Spin 5 are powered by up to 10th gen Intel Core i7 processors. The Spin 5 has two USB type C ports, two USB 3.2 ports, HDMI and MicroSD card reader, giving users plenty of connectivity options. The Spin 3 is similar, but with just one USB type C port. 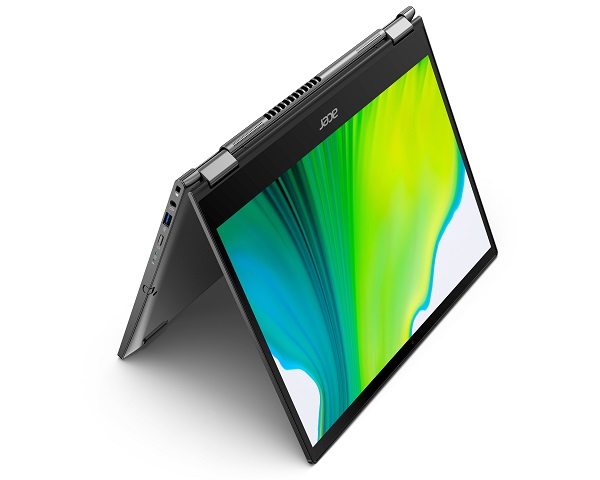 Acer's TravelMate laptops are primarily designed for business professionals, and the new P2 an P6 models are no exception. What this means in real terms is that Acer has focused on power and durability here, with the magnesium aluminium chassis stronger than a standard aluminium chassis, according to Acer.

Battery life is also key for those out in the field, and if Acer's own figures are accurate, the TravelMate laptop could win over some new fans. The P6 can apparently last an incredible 23 hours on a single charge. Not only that, but it can also charge up to 50% within just 45 minutes. The P2 can manage a more modest, yet still rather impressive, 13 hours.

Both the P2 and the P6 offer optional 4G connectivity, meaning that with the appropriate sim card, users can still access the internet even if there's no WiFi available. Both models also have fingerprint and facial recognition as security features. In addition, both are available as 14-inch or 15-inch models. 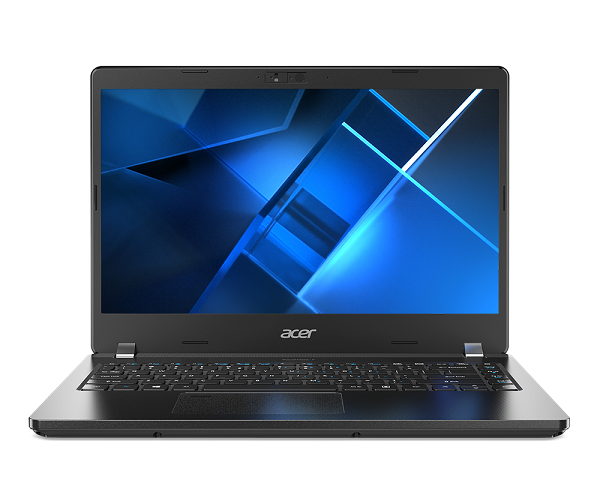 Acer's Predator range is known to gamers who take their tech seriously, and at CES this year, its has expanded the range with three new monitors, specifically designed for gamers. The 32-inch X32, 37.5-inch X38 and 55-inch CG552K all promise eye-popping color and fast refresh rates to ensure that every shot you take is on target.

You can read more about these monitors in our CES gaming round-up.