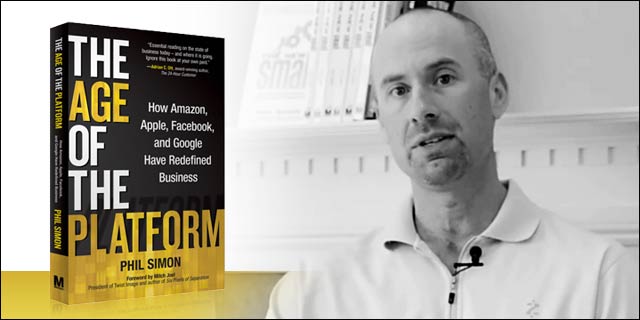 Last May, Google’s Eric Schmidt named 4 technology bigshots with skyrocketing growth as the “Gang of Four”: Amazon, Apple, Facebook, and (of course) Google.

In his book The Age of the Platform, four-time author and tech/management consultant Phil Simon explains what these companies have in common. In short, they have built powerful platforms, made up of technologies plus a network of partners and users. Think Apple’s devices + software + app store + developers and fanboys from around the world.

In the interview below, Simon considers how these giants are different and what startups can learn from them.

Tech Cocktail: What are the major differences between Amazon, Apple, Facebook, and Google?

Phil Simon: One of the biggest differences to me is this notion of first-mover advantage. So, for instance, you I’m sure know that Facebook wasn’t the first social network…. When you go back to 2004-2005, when you needed a .edu domain to have a Facebook account before it was open to the general public, Zuckerberg was literally telling schools that were clamoring for Facebook, “We’re not ready for you yet.” Now, think about how prescient that is. He’s basically saying, “If you use Facebook now, it’s going to suck and you’re never going to use it again.” I remember Friendster, 2001-2002, and it was such a cool concept. But here’s the problem with Friendster – it was way too slow … so Zuckerberg was saying, “We will come to you when we’re ready, and not before then.” And that to me underscores the fact that it’s not about being first.

Now, that’s Facebook. Look at Amazon. Totally different scenario. Back in 1994-1995 when Bezos started the company … he was all about getting big fast. So he was about expansion and he ticked off investors – he still ticks off investors – because he basically said, “I don’t care about short-term profits….” He was saying, “No, no, no. We want to be as big as possible. I want you to get every book possible around.”

Another example with Apple: you probably are aware that the iPod was not the first MP3 player. So why was the iPod so transformative? Yes, it was a cooler device and it was simple and it worked and I understand the cultural significance, but you also have to have the support of the ecosystem. So when, say, the Rio MP3 player was out in 2001-2002, yeah, it was clunky, but there just wasn’t a lot of music available.

So the same thing happened with Amazon. Amazon’s Kindle back in 2007 was not the first ebook reader. Sony had put one out in 2006. Why was the Kindle a thousand times more successful than the Sony product whose name I don’t even know? Well again, Bezos was smart enough to understand that you have to have basically the permission of the publishers.

Tech Cocktail: What factors will determine who stays on top in the future?

Simon: Not everything is under their control. It’s not 1980 or 1990 or even 2000; things just happen these days…. We’re really talking here about the consumerization of IT – in other words, if you look at these 4 platform companies, they’re pretty much being used by consumers, versus 10 years ago if you talked about the best technology, it was pretty much at work. Well now, we’re carrying around the technology with us. So consumer tastes can be really fickle. You’re not dealing with big companies with long procurement cycles and IT departments and once you’re Oracle or IBM and you get your software in there, you’re going to be in there for 15 or 20 years. If you don’t like your iPhone, you may just get a new one, and you can control that individually.

Another problem potentially is complacency. I don’t think these are complacent companies – again, Google is doing some things now that seem sort of counterintuitive. But here’s the rub: Google has to do these things. Google cannot say, “We’ve perfected search. We’re just going to sit back and in 5 years we’ll still be really, really profitable and really, really dominant.” That’s not true in the age of the platform….

One of the biggest challenges for these companies is trying to not unlearn what they’re doing, but go in these different directions. They’re also, in many cases, still identified with certain products. Amazon will never be a social network, in my opinion…. Sometimes you get branded for being one kind of product.

Tech Cocktail: What can startups do to be more like these platforms and be more successful?

Simon: First of all, it’s important to manage expectations. In a way, you kind of see Instagram as this curse for a lot of these startups…. Just because you do everything that Instagram did, doesn’t mean that your 13-person company’s going to get bought for $1 billion.

For every company like Instagram, there are thousands and thousands of companies that are going to fail, and it has nothing to do with the quality of the product. Some of it’s just serendipity. So the first thing I would say is you can still follow all the rules and not wind up being successful; in the age of the platform, you have to embrace uncertainty and intelligent risk. So you can’t necessarily follow a “me too” strategy.

There may be unexpected partnerships; in the book, I talk about frenemies and coopetition. Why is Microsoft investing in Facebook, selling patents to Facebook? Well, because they’re afraid of Google. You see these sort of crazy alliances sometimes. You can’t necessarily look at everyone as a potential threat; they’re also a potential companion, and maybe you could do something collectively that you can’t do individually.

Anyone who says, “If you do these 10 things you’re going to be really successful,” is quite frankly smoking crack. That’s why to me, the book is much more of a management text than a technology one. It’s really about: Are you comfortable with uncertainty? And to their credit, most people who work at startups I’ve met, are. At some point, you have to go with your gut. You can always look for more data. If you’re trying to copy what another company has done – it can still happen – but what about something totally different? Who knows how often a startup will have to pivot? Who knows how a product will look 6 months from now? It may be totally different. And I think that, more than ever, there’s really a need for companies to be as agile as possible.

The Age of the Platform is available (aptly) on Amazon – buy it here.