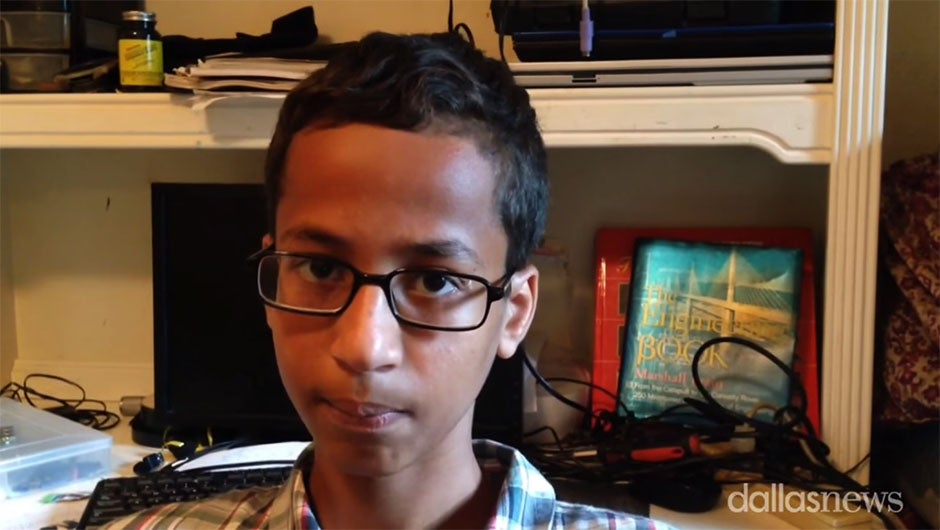 On Monday, 14-year-old Ahmed Mohamed, a freshman at Irving MacArthur High School in Irving, Texas, was arrested after bringing a homemade clock to impress his teachers with his engineering skills.

After showing his English teacher the device in class, Ahmed told the Dallas Morning News that his teacher told him that “it look[ed] like a bomb.” Soon after, Ahmed's teacher reported him to school officials and authorities, and five police officers arrested Ahmed and put him in a juvenile detention center.

So, to clarify: after pursuing his curiosity for science, engineering a functional clock from scratch, and hoping to get additional encouragement from his educators, a kid was arrested because the educators at his school and the local cops mistook a teenager's homemade clock for a bomb.

You have to admit those potatoes look a lot like grenades. #FreeAhmedMohamed pic.twitter.com/cwz4smzZze

1960: We need to invest heavily in math edu or the Russians will win 2015: We need to heavily regulate math tech or the terrorists will win

Cool clock, Ahmed. Want to bring it to the White House? We should inspire more kids like you to like science. It's what makes America great.

Ahmed Mohamed's arrest says a lot about the current state of STEM (science, tech, engineering, and math) education in the United States, and it also suggests a future in which the nature of innovation will not prosper under the system we're currently running. If those who run our schools can't identify a simple clock, what hope is there for the future of STEM in America?

As The Verge points out, the United States ranks 35th out of 64 countries in math and 27th in science, according to the most recent PISA results (a global measurement of competencies of 15-year-olds). And these findings about America's STEM education aren't surprising – they're something with which we've become deeply familiar. In research released this past March, for example, the Educational Testing Service found that the United States places last in math competency per a standardized test by the Programme for the International Assessment of Adult Competencies (PIAAC) – just another in a long-running string of disappointments regarding our STEM education.

Apropos of such shortcomings, our education policy leaders in this country have responded by introducing new initiatives to improve the state of STEM education in America. At the White House Science Fair held this past March, President Obama announced that an additional $240 million in new private-sector commitments will go towards encouraging boys and girls to pursue STEM education – increasing the President's commitments to STEM programs to over $1 billion. Just last night, New York City Mayor Bill de Blasio announced a ten-year deadline to make computer science education mandatory in all of the city's schools.

I expect they will have more to say tomorrow, but Ahmed's sister asked me to share this photo. A NASA shirt! pic.twitter.com/nR4gt992gB

While we as a country make claims on our advancement of science and technology, and on our cognizance of its influencing role in the future of our economy, the arrest of young Ahmed Mohamed is a striking example of an American ethos built on foundations of hypocrisy. While we collectively make pronouncements about our attempts to accelerate the development of American innovation, we consciously allow our education system to fall under a regime of ignorance – a regime so indoctrinated by the myth of American superiority that a recognition of the shortcomings of our STEM education can only be applied to the people and the experiences external to ourselves. We are deluded into thinking that our STEM education is great. And this has resulted in full-grown adults – blinded by what they know about engineering – into domineering their presumed knowledge of STEM and arresting a child for making a “bomb”.

And I haven't even touched upon the tones of Islamophobia that seem no less rampant today than in the aftermath of 9/11. The North Texas chapter on the Council on American-Islamic Relations has kept its eyes on Ahmed's arrest, and people across the Internet are pointing out the Islamophobic double standard that exists in America – both outside and inside the realm of education. Ahmed's father, Sudanese native and longtime Irving resident Mohamed Elhassan Mohamed, told the Dallas Morning News that his son “just wants to invent good things for mankind…but because his name is Mohamed and because of Sept. 11, I think my son got mistreated.”

Youngest person to ever build a nuclear fusion reactor. When you're not Muslim they support you! #IStandWithAhmed pic.twitter.com/jh995pQLpg — Black Intifada (@Akhenaten15) September 16, 2015

We need another country to help fix our STEM education because, clearly, we can't seem to get it right.