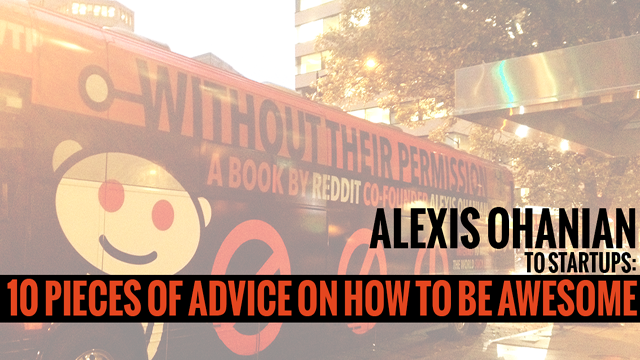 Sure, Reddit cofounder Alexis Ohanian may be at my (and his) alma mater today, in Virginia, but we mustn't disregard the fact that it has been Alexis Week in DC.Currently sitting on Reddit's board, Ohanian is also the founder of Breadpig, an advisor to Hipmunk, an Ambassador for Y Combinator, and a serial investor. Renown for his active fight against SOPA and PIPA (and his skyscraper-like height), the die-hard Redskins fan's homecoming was motivated by something other than last night's game against the Ravens.

All week long, Ohanian has been speaking at various college campuses and venues, as part of his bus tour around the United States promoting his first book, Without Their Permission: How the 21st Century Will Be Made, Not Managed, wherein he shares his ideas for harnessing the power of the Internet for good. 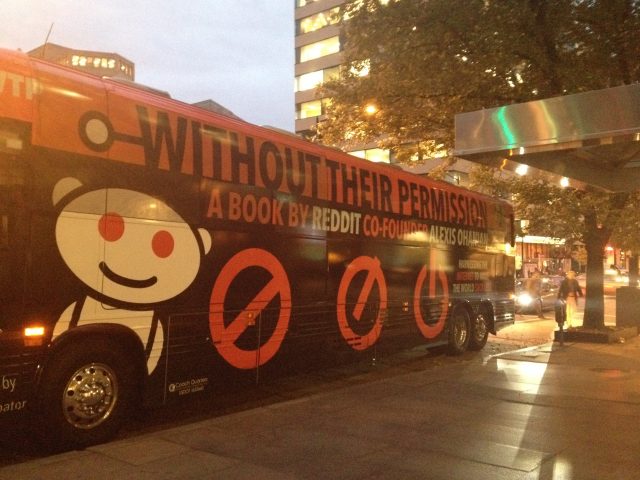 Kicking off with a small, happy hour event held by Future Tense (a collaboration between Arizona State University, the New America Foundation, and Slate), Ohanian spoke informally with New America Foundation VP, Sascha Meinrach, about Reddit and his rise to success, as well as the campaign for Internet freedom and Anonymous's ironic use of the Guy Fawkes mask (for which Time Warner is paid a licensing fee per sale).

While this reporter opted out of attending his talk at the George Washington University directly after Tuesday's happy hour, I did manage to catch the same talk (and more!) at a much rather intimate gathering at Canvas, organized by TechBreakfast. 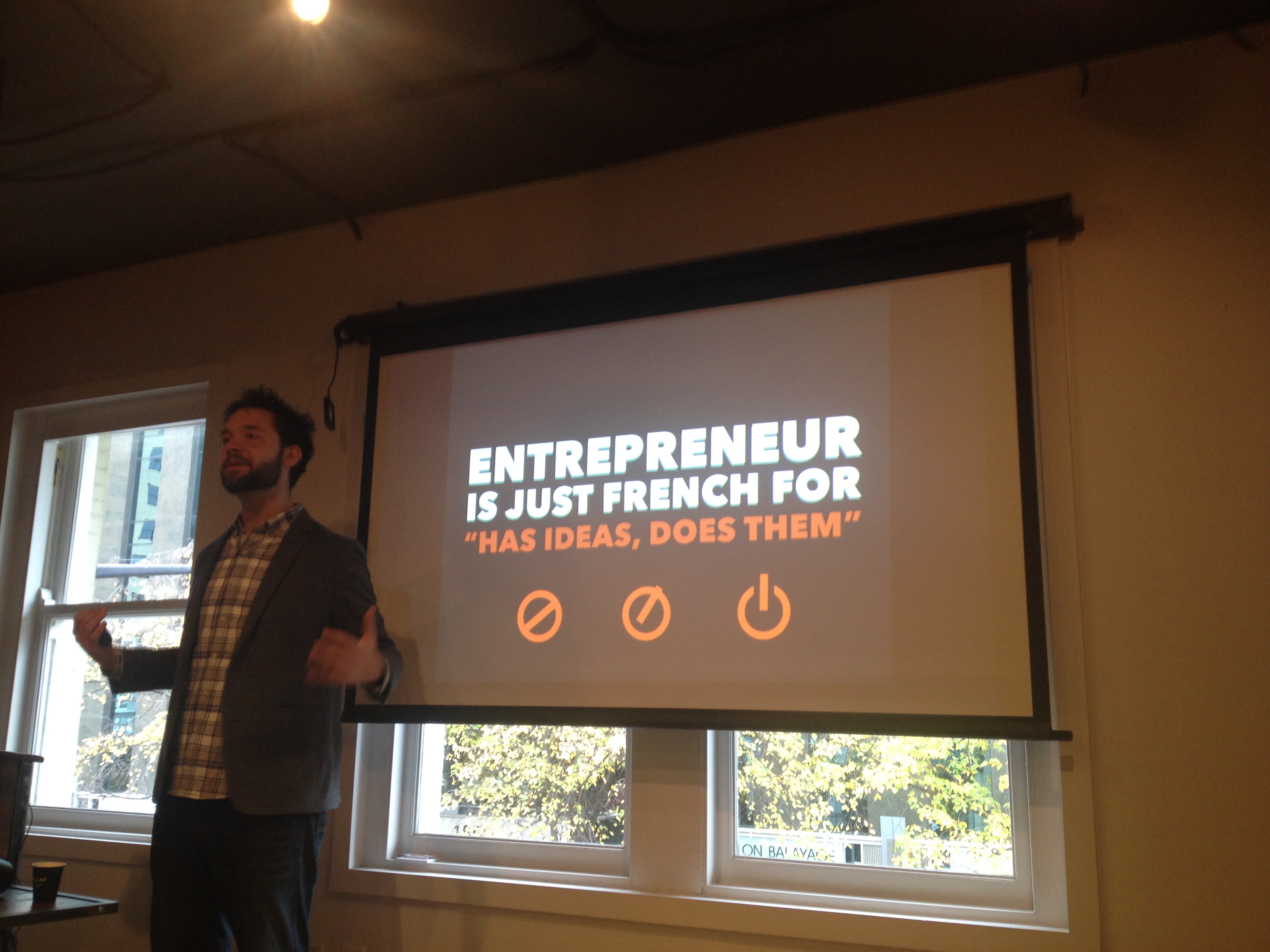 Beginning with the origins of Reddit and then touching upon his work with Net neutrality, Ohanian's talk was replete with words of wisdom (“how to be awesome”) for the current and prospective startup founders in the room. Some key takeaways from his talk include:

Startups are a Necessary Part of Our Economy

Ohanian asserts that “[startups] are in the healthiest part of the economy.” Because of this, we have to remember that startups must serve the greater purpose and recruit the help of others – to grow jobs and employ the vast amount of talent that is available.

Millennials Can Make the Most Difference

“The people with the power are the ones who not only explore it, but can build the ground underneath.” Despite the crappy post-graduation job prospects and high cost of student loans, Ohanian insists that Millennials truly have the greatest advantage in this current economy. Millennials are the ones who grew up in the Internet age – the ones who developed alongside these technologies. Want to make a difference? Visit Codecademy instead of BuzzFeed.

Although this point should be obvious, there are many startups out there that are undying in their attempt to sell crappy products. Referencing his first venture and precursor to Reddit, MMM (pronounced “mhmmmmmmm”) or My Mobile Menu, Ohanian says that no amount of great marketing (like a neato mascot, such as Reddit's alien) can make a terrible product or idea sustainable in the long-term. “Mascots won't save a mediocre product.”

Remind People That There are Humans Behind Your Product

Sure, we're developing all of these great apps and creating new technologies, but we shouldn't forget to remind everyone that there are actual humans behind these things. Referring to things like the MacBook, Ohanian says “no matter how beautiful the products we use are, they're just cold devices; you have to remind people [that] there are humans behind [these] soulless robots.” Truly empathize with your customer and provide a great user experience.

While the idea for MMM was a flop, Ohanian and Steve Huffman eventually stumbled upon the idea for Reddit. Even though you never know where an idea will take you, or where you're headed once you have a startup based on that idea, everyone else is literally going through the same thing. “We're ALL trying to hack it; we're all trying to figure this **** out.”

If You're Not Seeing Growth, Then You Yourself Need to Develop

Ohanian believes that when you're not seeing growth, the issue might be you. “Either you're working too hard, or you're incompetent.” In either case, you have to change your own behavior in order to start seeing some development. If you're working too hard, then figure out where you're being inefficient. If you're incompetent in a certain capacity, then improve yourself. For instance, if you're a programmer, maybe improve on your coding skills.

Have a Great Idea

“We're all competing with cat photos online,” says Ohanian. Whether you're developing a new app, building a product, or producing content for a blog, we have to remember that we're competing with a global marketplace of ideas. If you want to be successful, you have to create something that captures the attention of people.

Sometimes a Great Idea Is Dependent on the Times

Referring to Airbnb's success, Ohanian believes that whether an idea or product is considered “great” depends on the current environment. Sometimes, it can all come down to timing and people's changing attitudes. For Airbnb, part of its success can be attributed to changed perceptions about staying in strangers' homes.

“All of your stories do not need Silicon Valley to happen.” We have the Internet at our disposal, and therefore a pathway to the knowledge and the skills we need to turn our ideas into reality. “You can be entrepreneurs online, all the freaking time,” exclaims Ohanian. Sure, Silicon Valley is great and there are certainly benefits from being there, but it's #whatever: “go to the Valley, take their money, and come back [to develop your company].”

Everything Depends on a Free and Open Internet

The Internet is what has allowed great ideas to rise to the top and become truly successful. We all have to remember that an Internet that is free and open – one that is removed from the influence and control of service providers and governments – lies at the foundation of tech startups. Especially as members of the DC tech community, we have to make sure that our policymakers realize how important it is that all links are created equal. 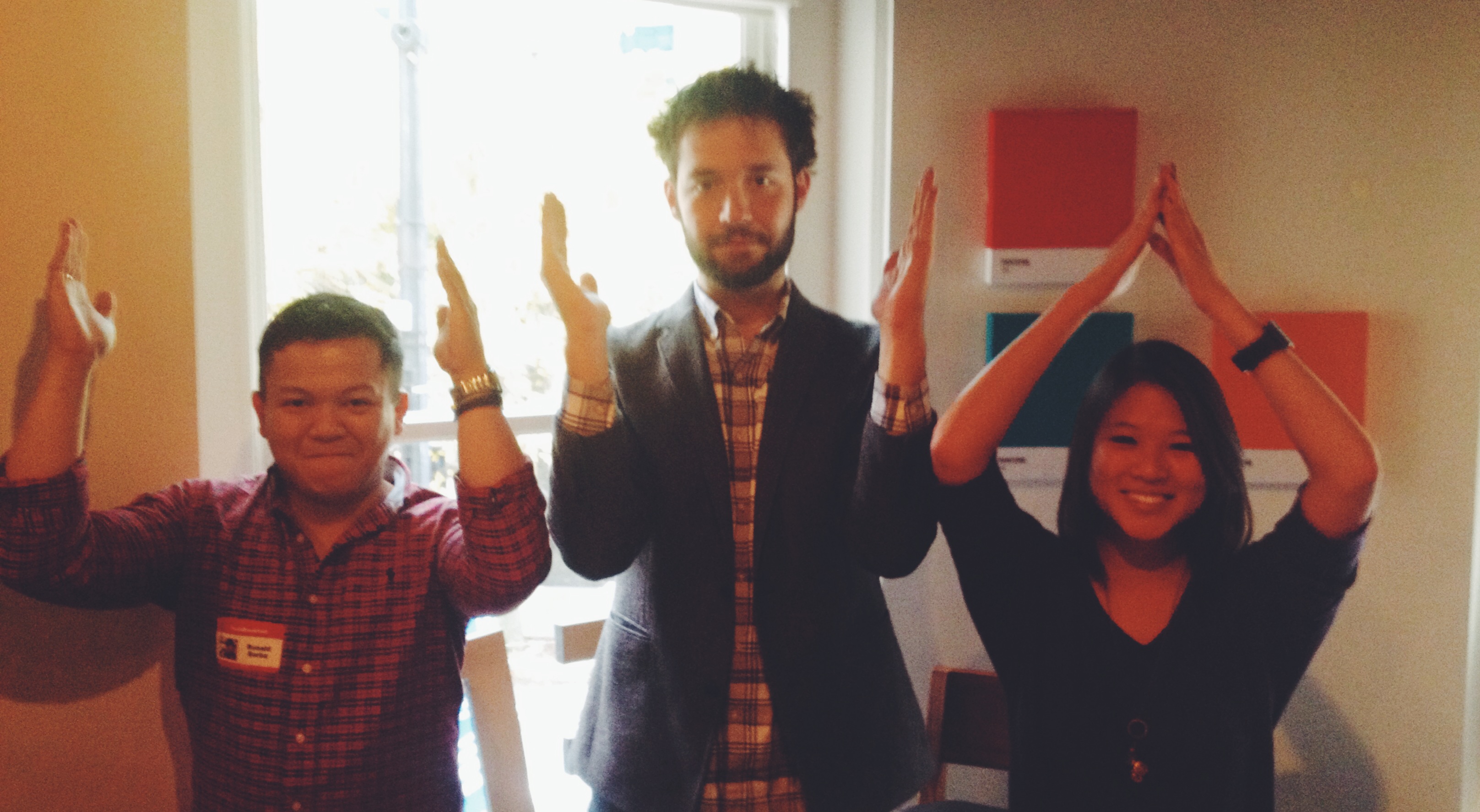 Alexis Ohanian continues his tour tonight at the University of Virginia. Wahoowa!

Ohanian continues his tour tonight with a visit to the University of Virginia. If you missed him in DC this week, he will return with a presentation at Georgetown University next Friday, November 15. You can buy a copy of his book, ‘Without Their Permission', from Amazon.