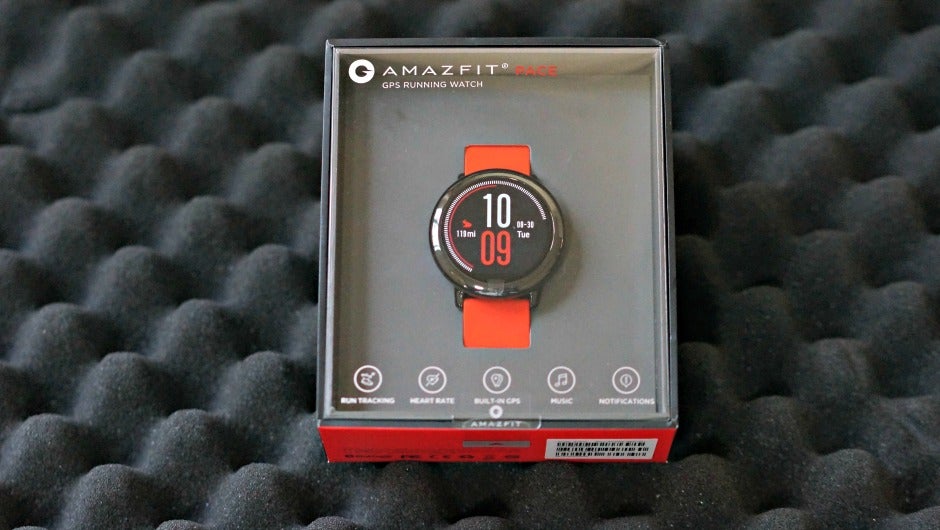 Huami and Xiaomi may not be well established brands in the US just yet, but over the next few years we’ll be hearing a lot from each of them. In fact, last year we reviewed the duo’s last fitness tracker, Mi Band 2, with rave reviews. And now, Huami is back with a GPS enabled fitness smartwatch.

Dubbed the Amazfit Pace, this rather affordable GPS tracker uses a customized version of Android Wear, features an always-on transflective touch screen, prompts you with notifications from your phone, and allows you to store music directly on it. Unlike most other GPS or fitness trackers, Huami’s goal with the Pace is an untethered experience. To get a firm grasp on its offerings, over a period of a month and a half, we took the Amazfit Pace on sweaty runs, an insane half-marathon trail run, and casual everyday use. 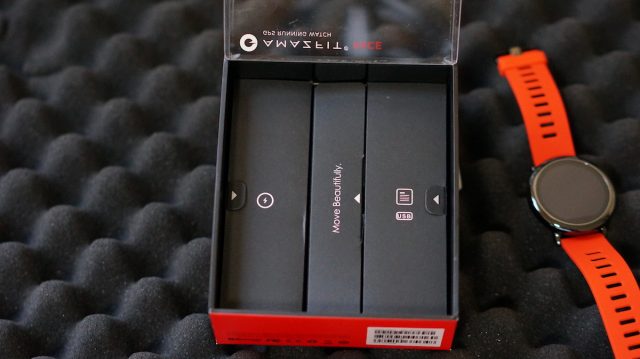 Unlike most other GPS enabled smartwatches, the Amazfit Pace has a very reasonable price tag of $160. By comparison, Garmin is one of the more popular GPS-enabled watch brands, and their most similar model costs $20 less, has a slightly less favorable battery life, a basic LED display, and receives push notifications from your phone.

It also boasts some solid battery life with between 3-5 days of active tracking and 11 days of basic use. For serious runners, the price tag alone should be appealing, especially when it comes time to upgrade beyond advance step trackers like Fitbit; however, the watch is not without its shortcomings. 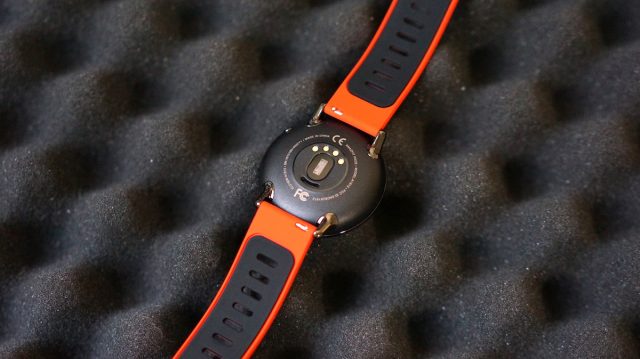 As far as basics go, the Amazfit does a great job. Between GPS location tracking, heart rate monitoring, and sleep tracking, the smartwatch appears to be just as accurate as competing hardware. For example, we took the watch out while on a half-marathon trail run out in the wilderness, and the Amazfit accurately tracked distances and heart rate in parallel to the Apple Watch 2. Through several other outdoor runs in other environments, it continued to track with near identical results.

While the Amazfit Pace does have an integration with Strava, it’s limited in passing off data. It also does not support Google Fit or Apple Healthkit yet, which is a huge pain. 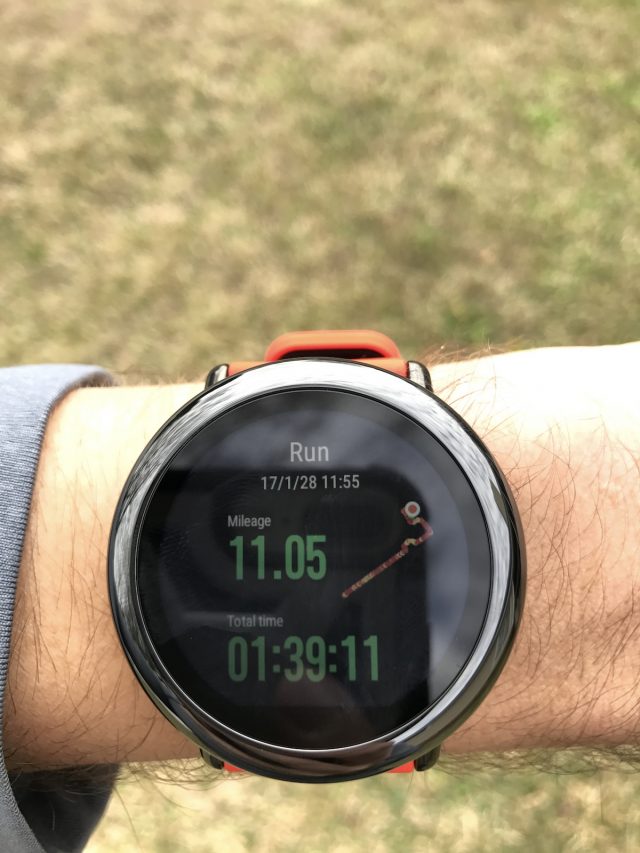 Notifications are great, but data-based coaching is even better. The Amazfit touts a lot of different data points, and you can have it display more or less while in an activity. While on the go, you’ll get the basics, including vibration alerts, for when you hit mile markers, but there are other advanced settings.

Unlike the Apple Watch, Amazfit also includes pace alerts. If you start to hit a pace slower than your target, it’ll notify you to pick up the pace. Other GPS trackers offer this as well, but cost a bit more money.

One of the more unique features is that the watch allows you to store about 4GB worth of music on it. Using wireless or Bluetooth connected earbuds or speakers, you can then play music directly from the watch, rather than using your phone. This would be great in theory, except you can’t control the music while running, there is no way to shuffle it, and it just plays in a straight line. This could just be speaking from personal experience, but there is a lot of swapping of music during long distance running to find the right motivator.

Overall, the Amazfit Pace is a great piece of hardware, is accurate with tracking, but has quite a few software shortcomings. 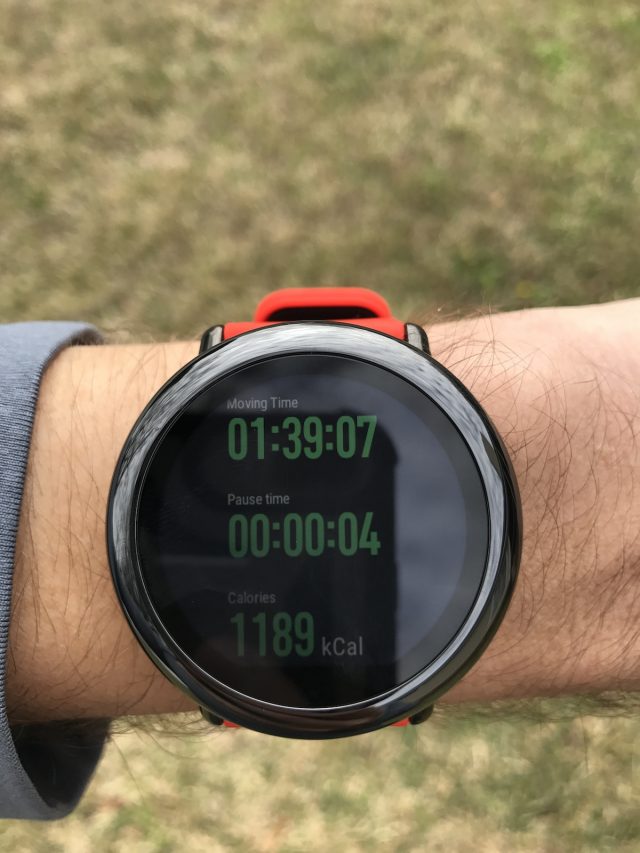 GPS watches are not what we would call pretty or fashionable. Apple’s latest watch version has that edge over most competitors, but otherwise screens are often oversized, a bit bulky, and designed to take hits. Amazfit Pace on the other hand looks pretty damn good, but it’s still not something you’d likely wear during an evening out on the town.

With a slightly oversized watch face, it boasts a ceramic bezel that allows it to look better and remain resistant to scratches. Amazfit also has an IP67 rating, which allows it to be water and dust resistant as well, but would not be ideal for swimming. It also uses standard watch bands, which means you can more easily customize it away from the flashier red/orange colors. Speaking of colors, the default base comes in either red or black, as do their bands.

Generally speaking, the hardware itself looks nice, but once again has some issues tied to the software. Within that large screen size is an always-on transflective color LCD screen. In theory, this means the watch face will automatically adjust for the level of light hitting it, but due to the automatic settings it’s rather difficult to see in the dark. And, because there is no way to manually adjust the brightness, that is a huge pain. Like other trackers, the Amazfit also features several different watch faces; however, these too can’t be customized. Due to this being a Chinese watch converted for Americans, there are still some UI bugs to flesh out, such as forced 24 hour clocks instead of 12 hour clocks, and using Chinese audio queues alongside English text prompts.

Overall the hardware looks great, can take the kinds of hits you’ll experience when running, but lacks customizations for watch faces and has issues with LCD brightness.

Should you buy the Amazfit Pace? It depends. On one hand, we really dig the hardware. On the other, the software uses some sort of custom version of Android Wear, but it’s feature locked and over-simplified. In the future, we’d suspect that the software will improve to the point where the watch will better integrate with Apple Healthkit, Google Fit, or other fitness apps, but right now you're stuck with a limited Strava connection. Software aside, the Amazfit has a decent active battery life, is physically designed well, and is accurate for tracking distance, heart rate, and sleep.

We give the Amazfit Pace a 3.6 out of 5, but would still recommend it as a standalone, affordable GPS watch. It’s designed to be untethered from your smartphone, but currently it feels like that connection is more of an afterthought. If they fix up the English version of the software, the score would easily get a boost.

Where to buy: Amazon, Amazfit