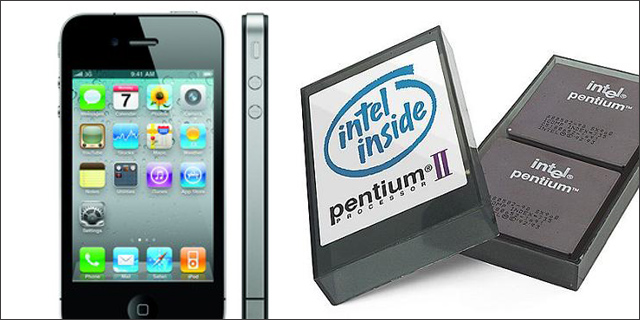 It’s hard to read about Apple's iPhone event the other day without being confronted with a flood of disappointed customers.  Hundreds of case studies have been written that focus on Apple, which is getting kind of annoying – isn't there another successful company that people can write about as an example? – and its ability to develop innovative products that are creatively designed.  The general public should start to get used to the fact that major industrial design changes are going to be less significant as Apple continues to grow its mobile business.

Go back 15 years, when Intel was on the Pentium II, and you'll see the same scenario playing out.  Back then, the industrial design of the PC wasn’t much of a differentiator; the focus was on processor speed.  But once the processor got up to the whopping speed of 300 Mhz (that means Megahertz for the young people out there), and processor upgrades went up 33-100 per release, there wasn’t much of a reason for people to upgrade, since the basic PC tasks worked fine on a 300 Mhz machine.

Intel started to focus more on new software to act as the key selling point of their processors.  Intel’s developer programs were all about getting “ISVs” to code new programs that would tax the processor.  By doing this, Intel could easily demonstrate the difference between a 300Mhz processor and the new 350Mhz.  Having a fast processor was the key to unlocking the upgrade path.  Intel’s processor launch events were nearly all focused on new software applications that could be run on the new processors.

Apple was certainly expecting a limited “wow factor” with the hardware improvements planned for the iPhone 4S.  Come on, how many people really need to upgrade their camera’s phone from 5MP to 8MP?  However, the hardware upgrades are paving the way to turn the phone into a supercomputer that can run processor-intensive applications.  Enter Siri.  No one knows yet for sure if it is truly unusable on the iPhone 4’s A4 processor, but Apple is holding Siri hostage to get people to upgrade to iPhone 4S.  While the tech geeks will appreciate the new processing power and increased speed of common tasks on the phone, the general public needs to have a functional reason to upgrade.  Apple may be hoping that Siri is that function.

Of course, iOS 5 could also be the “killer app” that drives upgrades.  It’s conceivable that the added functionality may push the limits of the iPhone 4’s capabilities and lead customers to seek out a faster experience.  If the interface is a major upgrade (thus Apple calling it iOS 5 vs. iOS 4) that people find compelling, maybe it will be another reason for users to upgrade to the iPhone 4S.

Speculation is already rampant about what the iPhone 5 will include and look like.  It makes sense that Apple will roll out an NFC phone with true 4G capability, but those are still only going to be interesting features because of the applications they enable.  They won’t be about industrial design changes.

Recent rumors have said that Apple may be looking at a curved screen as one aesthetic change.  This seems a bit strange though.  Remember that up until about 5 years ago, TVs all had curved screens and how it was cool when they became flat?  Seems that if these rumors are true, our tastes are going backwards.

Going forward, make no mistake, the new applications that Apple enables will be the key to their continued iPhone success.

Anuj Agrawal (@anujagra) is a digital media enthusiast in the DC area, with a passion for understanding what makes consumers tick. From the fundamentals of designing products that are engaging to understanding the psychology of the buying process, he has helped companies develop innovative consumer experiences.