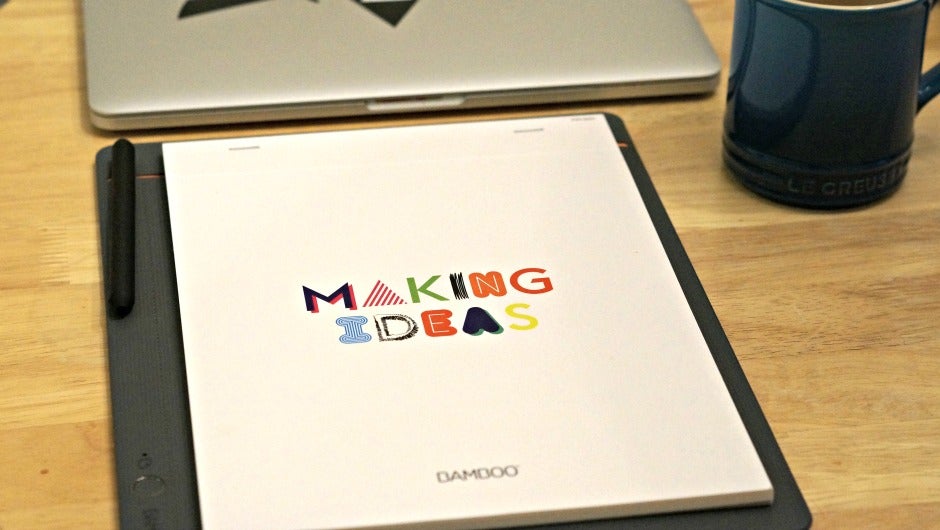 In an ever growing digital world, the days of writing on notepads and in journals are quickly going the way of the dodo bird. If you’re also anything like me and have terrible handwriting, then computers, tablets, and mobile devices are the preferred method for taking notes. However, sometimes you just need a good ole fashion notepad and pen to illustrate what’s brewing in your mind. The issue in that situation being that you’re then left with dictating the information back to some digital means, scanning it and converting it, or accidentally spilling coffee all over it (bad infomercial style).

Wacom, the creator of some of the most used design tablets on the market, has another solution for just this occasion, and it’s as simple as taking notes as you usually would and pressing a button. The Bamboo Slate is essentially the same as any traditional notepad, but housed on top of a sensitive tablet.

Over the course of a month we used Wacom’s Bamboo Slate to see if the gadget helped or hindered our workflow for when we needed to put some ink to paper. Also, because I am certainly not an artist, I’ll spare you any doodles that are reminiscent of perhaps one of the best/worst sites in the history of internet trends, Maddox’s I am better than your kids.

Unlike a standard tablet or design tablet, the Bamboo Slate is as easy as opening the box and removing it from it’s sleeve, charging it up, downloading the app and following a simple walkthrough, then connecting the Slate to your mobile device through bluetooth. From there, all you need to do is press the button on the Slate anytime you want it to push a digital version of what you drew on the notepad. Easy peasy.

From handwritten notes to sketch notes and illustrations, the Bamboo Slate is both the affordable and easy to use solution for capturing it all in one place. While we did not put the battery life to a countdown timer, with intermittent use over a few days it kept it’s charge and then some.

This whiteboard makes your creative sessions easier for remote workers

After using it for note taking, I did find two slightly negative issues, but certainly ones that I can live with. As any lefty knows, a typical ballpoint pen will produce that lovely smear of ink on your hands. Because the included and required ink cartridges are a standard ballpoint pen, you’ll get a bit of that but it’s not as bad as the cheapy BIC pens.

The other, well that is entirely user based and unfortunately no AI on this planet will be able to read my terrible handwriting. Like most handwriting to text conversions, if it’s worse than a doctors, the Bamboo Slate will have a hard time converting it into text. With that said, I also gave it to someone with great handwriting and the conversion worked well. When converting a design, it also converted it to an illustrator file without problem. Unlike a piece of paper, the Slate also pushes all these to a cloud storage system, so you can easily retrieve your scribbles and notes.

Not only does the Bamboo Slate just flat out work, the design is as functional as any notepad. With the larger version you can easily prop the pad up like you would with a clipboard, and the smaller version is a bit more handheld.

At one pound, it may feel more weighty than your tablets and smartphones, but certainly isn’t an issue for long-term note taking. It’s also durable, so when your arms inevitably give out from the heavy weight – we’re kidding – it should handle most falls. As for size, the larger version is designed for any standard A4 notepad, but you can also order refills from Wacom if you prefer what they offer. The pen uses a standard ballpoint pen ink cartridge, but for it to function properly you’ll need to use theirs, which cost $10 for three.

Should you buy Wacom’s Bamboo Slate? If you doodle, prefer taking notes with a pen, or have ever needed to draw an illustration and then convert it into a digital format, absolutely. The price point easily makes this more affordable than any standard tablet or illustration tablet, while remaining both lightweight and effective in its purpose.

Where to buy: Amazon, Wacom