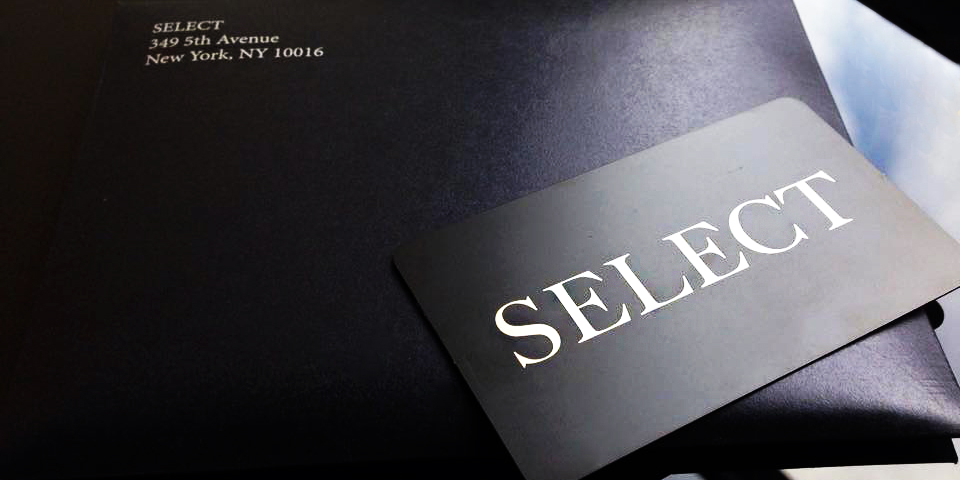 Let's get real: the vast majority of us will never – never – get access to an American Express Centurion Card. More popularly known as the Black Card, the invitation-only card offers premium services, including a dedicated concierge, personal shoppers, and an endless number of benefits with top airlines and hotels from across the world. But with a membership base limited to those in the upper-most echelon of society, there's honestly just the slimmest of chances that you'll ever get your hands on a Black Card. New York City, NY-based SELECT is attempting to change that through its own variation on the Black Card – and it will soon launch in Washington, D.C.

“I saw the opportunity to disrupt two industries with one game-changing program,” said SELECT founder and CEO Carlo B. Cisco. “On one side, you have antiquated plastic, credit cards with insignificant benefits even at the most premium levels. On the other, you have daily deal companies who have good deals, but also have a less-than-stellar user experience – not to mention a rapidly decaying deal quality as business owners realize they produce a terrible ROI.”

According to Cisco, creating SELECT was a way to provide top-tier brands and businesses with a sustainable and profitable method for attracting and retaining their target clientele, while offering SELECT members with premium benefits and high-quality, VIP experiences. In order to receive SELECT benefits, prospective members must apply through a fairly competitive process (Cisco notes somewhere between 30 and 40 percent of all applicants are offered membership). Once accepted to the SELECT community, members receive a black, metal card that is linked to one of their current credit or debit cards and must pay an annual fee of $150 to keep benefits active.

Unlike competitor Magnises, SELECT focuses more on individual membership benefits as opposed to concentrating on social experiences. After operating in beta for almost a year in NYC, SELECT officially launched in the city this past July and has since grown its membership to more than 3,000 members. For those in its premier community, benefits include things such as sizable discounts at top-rated restaurants (with a score of 20 or higher on Zagat), low rates at top hotels (such as the Mondrian SoHo), ongoing special deals at retailers like Brooks Brothers, and even up to 50 percent most movie tickets. Members also have access to members-only SELECT events, from special lectures and speaker series to mixers and open bars. And, much like American Express's Black Card, SELECT provides its members with a 24/7 concierge service. With all these benefits, it's no surprise that the company has experienced a recent boost in applicants.

“Once we saw the huge growth [in NYC], we started scoping out other cities,” said Cisco. “We chose D.C. because we wanted a market that's fairly easy to travel to and has a similar demographics as New York.”

At the beginning of 2015, SELECT will officially launch in D.C. – which, Cisco asserts, will be just the first in a total of about four or five cities to which it hopes to expand. This upcoming January, the company plans to host a party on Embassy Row announcing its official launch in the nation's capital. According to Cisco, SELECT members in D.C. will gain access to such benefits as discounts to their full bills at restaurants by Richard Sandoval (e.g., Zengo) and José Andrés (e.g., Oyamel), as well as access to special events apropos of D.C.'s civic-minded crowd.
Learn more about SELECT or apply for membership.