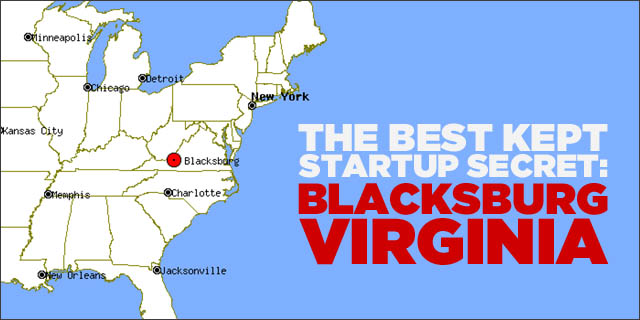 When you think about startups, entrepreneurship, and technology, typically you think of Silicon Valley (“The Valley”), New York City, DC, Austin, and other major cities and towns. However, you are missing one town that is the best kept secret in America: Blacksburg, VA.

Blacksburg is a small town located in rural Southwest, Virginia, but it is quickly becoming a technological “hub” in the state of VA as well as along the East Coast. With a population of approximately 42,000, how is it possible that this little town in rural America can compete with the likes of Silicon Valley and NYC? The answer is easy: intelligent students collaborating in a close-knit environment with very little to do.

With higher education changing rapidly, students are looking for more ways to get value out of their education. At Virginia Tech, Radford, and other universities in the Blacksburg area, students have taken on entrepreneurship. And, they’ve succeeded.

Students have started companies such as Heyo (15 employees, raised over $500K, still located in Blacksburg), Koofers (raised over $6M, over 1M students), VirtualU (raised $150K as students), MailPilot (bootstrapped and crushing it), and many more. And now, Virginia Tech has launched an entire initiative around entrepreneurship, simply to foster the movement already going on around campus.

Now, why is it beneficial for a startup business to be located in Blacksburg? It’s a simple economic answer: there is a plentiful supply of labor for a very fair price. If you are looking for an engineer in Silicon Valley, you typically have to pay a premium, as engineers and computer scientists are in very high demand in The Valley. However, in Blacksburg, there are approximately 7,000 undergraduate student engineers who are eager to learn with a limited supply of jobs. In other words, you can choose talent, rather than have to settle on a hire.

As a startup, your audience is typically customers all over the world, so location is not the most important determinant of your success. According to AreaVibes.com, Blacksburg is 70 percent cheaper to live in than San Francisco. And, your money goes twice as far in Blacksburg than in New York City. And, Blacksburg is one of the first towns to get gigabit Internet.

As a local entrepreneur, I can tell you that we never have a shortage of applications for our internships and job postings. We have never had to use a recruiter; we get tons of applications simply by posting to Craigslist and via a college listserv. By working in Blacksburg, we feel like we hit the jackpot; a true arbitrage opportunity to attract and recruit talent, with a top rated surrounding area that automatically increases employee wellness just by employees living here. Employers don’t have to pay a premium for their talent; in reality, employers pay a discount for their talent. And, the best part is their employees will still have more purchasing power than workers in New York City.

There is a reason that companies such as Rackspace have chosen to expand their operations in Blacksburg, and there is a reason that Facebook, LinkedIn, and other top tech companies have considered having satellite offices located here, too: the students are hardworking, intelligent, entrepreneurial minded, eager to learn, and….. there are a lot of them, and not a lot of competition.

Guest author Brandon Carroll currently serves as the VP of Business Development for Koofers, where he is tasked with connecting employers with a college recruiting tool that advances the way employers find qualified students for internships and entry-level job positions. He is energized by the idea of impacting people worldwide. In his various roles, he has led and served a multitude of people. He has delivered over a dozen speeches on the strategies for cultivating a compassionate culture in schools via his non-profit, Actively Caring for People.