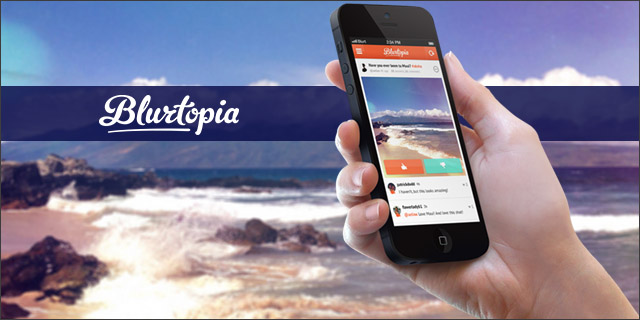 What is our purpose in life? Are there inherent flaws with bipartisan politics? What shoes go well with this killer outfit I want to buy? These are life’s burning questions – well not the last one so much – and the Internet never fails to provide us a soapbox from which to ask.

However, when people pose these questions, the answers, comments, and debates sparked become so rapidly unorganized that the original question is buried under segues and tangents. Just try to comb through a Reddit thread that has 1,000-plus comments and you will understand what I mean.

The cofounders of Blurtopia would agree that the problem with social polling, a facet of digital quickly growing in popularity, rests in failed attempts to coherently aggregate the results.

So, Grant Bostrom, Keiran Flanigan, and Ryan Bettencourt developed Blurtopia, a self-proclaimed mixture of Reddit and Pinterest, to reinvent the way people interact on the go while exploring the greatest questions in life.

Users blurt their thoughts and questions to the Blurtopia community and receive instant feedback that goes well beyond Facebook’s ‘like’ button. The platform promotes thumbs up and down functions, scale ratings between one and five, and a ‘this' or ‘that’ feature.

“Think of a conversation or debate; what is not controversial is not interesting,” says Bettencourt. “We are not stroking people's egos all the time with Blurtopia.”

To that end, users in the Blurtopia community choose not to send private blurts, or blurts that can only be seen by friends. Rather, most users are on board with current modes of social polling and want to jump into conversations with the entire community and people they may never know.

“People get certain experiences from Instagram and Facebook that come across in the form of minor feedback on a widespread broadcast,” says Bettencourt. “Our users push something out purely to receive something back: we are not a broadcast tool.”

And that larger mission of sparking conversations about passions with anybody from anywhere is what gives Blurtopia its direction as they grow to accommodate the rapid onset of user interest.

While their base remains small at the moment, the team reports that the levels of activity are already incredibly high. After the recent launch of version two, users averaged 30 blurts answered in one weekend alone.

Blurtopia operates on web platforms and iOS currently, and it is highly addicting. During my first time on Blurtopia, I spent two hours enveloped in a butter-smooth engine washed with cool colors, weighing in on debates about whether soda or beer is better on a hot day, and blurting things to the whole blurting community. And by the way, beer is way better on a hot day.