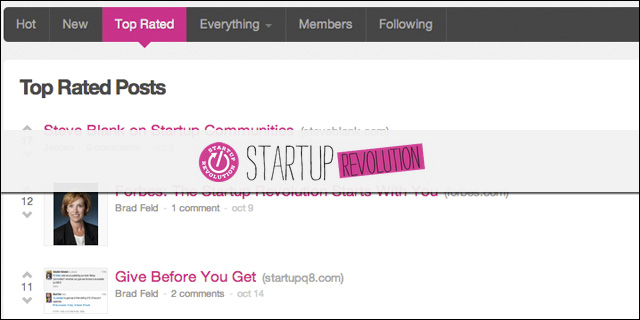 Starting a startup community revolution ain't easy.  It would take something along the lines of -say- a five book series and a dedicated online venue to host this community.

As it happens, Brad Feld is the man for the job, and is doing just that.  The TechStars co-founder, managing director at Foundry Group, prominent investor, blogger, and marathon runner (including a 50-miler), has launched a Hacker News-like social news site as part of his Startup Revolution.  Unlike Hacker News, the hub at Startup Revolution is going after a much broader community.

“The audience is different – I'm focused on entrepreneurs who want to engage in discussions about creating the companies and startup communities, having an awesome life, and exploring better ways to be effective as entrepreneurs,”  Feld tells Tech Cocktail. “I'm less interested in all the current tech news / issues discussions.“

In other words, those turned off by Hacker News' largely technical/developer focus may find the Hub to be a better fit.  Feld adds, “I think the SocialEngine app is a much more modern and social infrastructure to build on than the original Hacker News and Reddit core.”

As of now the Hub editorial has a heavy “Startup Communities” slant, but with the site still in its infancy, Feld is taking a hands-off, Hsieh-like, approach to the site's evolution, “I'm trying to be inclusive of anyone who wants to engage. I'm letting anyone lead.”

Take a look at the Hub and let us know what you think.  Can it compete with Hacker News and/or Reddit?