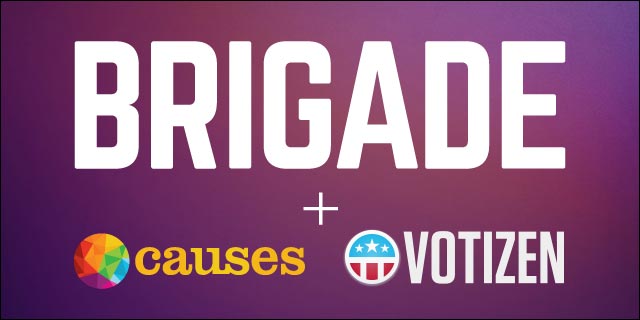 Brigade Media recently announced that they have acquired a controlling stake in Philotic Inc., the company that owns Causes aka the world’s largest online campaigning platform. Philotic Inc. also owns the political advocacy startup Votizen, and this move marks one of the first steps Brigade Media has taken to re-energize interest in democracy.

The idea is to bring together people who are passionate about different issues in their communities, cities, states, and countries and allow them to take action with. And Brigade saw Causes and Votizen as the perfect opportunity to leverage that mentality.

Since Causes got its initial start in 2007, 186 million registered users in 156 countries have raised over $48 million for nonprofits and collected 34 million signatures for grassroots advocacy campaigns. Separately, Votizen helped voters learn about issues, elections, and take collective action via social media.

Further, the technology that Causes and Votizen helped build will in turn help Brigade Media fulfill their goal of tackling, as they say, “one of the last areas of our society nearly untouched by technology: civic engagement.”

In addition to the acquisition, a few of the leaders from Causes will be moving into key executive roles at Brigade. Matt Mahan – former CEO of Causes – will become CEO of Brigade, James Windon – former VP Revenue at Causes – will become President of Brigade, and Sean Parker will continue to drive product vision and work with Mahan and Windon on strategic functions of the company.

“The Causes and Votizen executives who are joining the Brigade team bring a unique understanding of the opportunities and challenges associated with civic engagement and advocacy,” says Parker. “Their technical experience and expertise gives us a massive head start in tackling a tremendous challenge.”

As they move forward, Brigade is looking for engineers, product designers, and political strategists who share their vision to build an easy, effective, and enjoyable platform that brings political power back to the people. There is guaranteed to be some good news about the relatively stealthy startup further down the road.