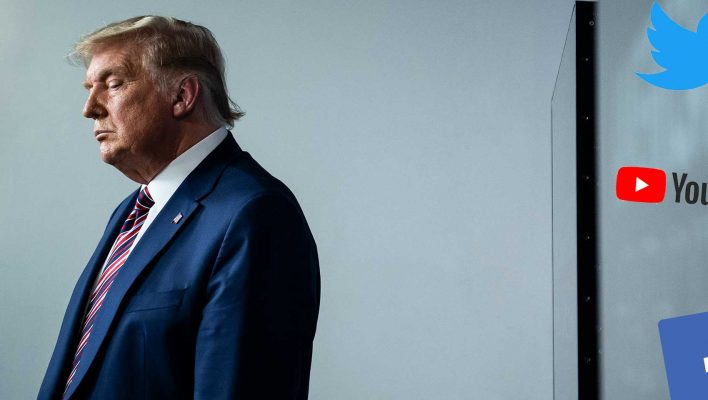 As rioters forced their way into the chambers of the Capitol building and offices of Representatives this week, President Trump was uncharacteristically silent on social media — in stark contrast to his proclamations during the wave of BLM protests last year.

And then, Trump was himself silenced: hit with a ban from Twitter initially for 12 hours – which has now been extended indefinitely – and a ban from Facebook and Instagram for the remainder of his presidency.

After close review of recent Tweets from the @realDonaldTrump account and the context around them we have permanently suspended the account due to the risk of further incitement of violence.https://t.co/CBpE1I6j8Y

The move by Twitter is unprecedented against a world leader. It affects Trump's personal Twitter account, rather than the official presidential account, which will pass to President Elect Joe Biden when he takes office. With Twitter long established as Trump's platform of choice for connecting with his base and riling up his opponents, there's little doubt the move will be causing upset in the Trump camp.

Individuals and commentators alike have been quick to apportion blame for the events on Capitol Hill to social media platforms. From Trump encouraging the mood of the rioters and calling them in from across the country on Twitter, to the rioters themselves sharing footage and photos, and even live-streaming the event online, social media's fingers look grubby in all of this.

While social media platforms do not legally hold much responsibility for the content that ends up on their sites, a sense of moral duty may at long last be emerging. We doubt Jack Dorsey would want his platform to be remembered in history as the platform that facilitated a coup.

The world's biggest social media platforms and their founders do need to think hard about how they want to be remembered in the years and decades to come. Have the platforms done enough? Or do their actions leave a lot to be desired?

As ever with President Trump, we begin with Twitter.

After successive tweets alleging voter fraud in the run-off election for Georgia's two seats in the Senate, Trump finally started tweeting about the situation unfolding on Capitol Hill. However, instead of asking the rioters to disperse and go home, Trump simply asked them to “Stay peaceful!” and “Remember, WE are the Party of Law & Order — respect the Law and our great men and women in Blue.”

Twitter, in response, removed three of Trump's tweets and locked his account, initially for 12 hours. This was then extended late on Friday to a permanent ban from the platform.

In the context of horrific events this week, we made it clear on Wednesday that additional violations of the Twitter Rules would potentially result in this very course of action. https://t.co/NrANZJcAfo

However, we made it clear going back years that these accounts are not above our rules and cannot use Twitter to incite violence. We will continue to be transparent around our policies and their enforcement.

Twitter justified the action as part of its Civic Integrity or Violent Threats policies.

You may not use Twitter’s services for the purpose of manipulating or interfering in elections or other civic processes. This includes posting or sharing content that may suppress participation or mislead people about when, where, or how to participate in a civic process.

It also states that Twitter may remove your tweets, require edits to your profile, label tweets to provide context or, in the event of “severe or repeated violations of this policy” your account may be removed entirely.

However, Twitter has also remained adamant to date that it does not want to get too involved in the tweeting of world leaders believing, for better or worse, that there is a public interest in all their tweets. Of course, this is easy to understand when the world leader in question is the US President. Quite how Twitter would react to sabre-rattling tweets from, say, Kim Jong-Un or Iran's Hassan Rouhani, is another matter – though, they do in fact have a world leaders policy to cover such eventualities.

As for social media platforms' responsibility for the content they host, Section 230 of the Communications Decency Act 1996 says that an “interactive computer service” cannot be treated as the publisher or speaker of third-party content. This protects sites from lawsuits in the event that a user posts something illegal.

Twitter users, of course, have been split along ideological lines as to whether the tweet removal amounts to censorship or common sense. We've covered social media censorship (and whether it is actually a thing) in the past. In very a narrow sense, Twitter could be seen to be censoring Trump. However, Trump is still, for now, the President of the most powerful country in the world. He has an entire apparatus of communications at his fingertips but decides to communicate primarily through social media.

Facebook has been a hub for much of the misinformation that propelled Trump to power.  On January 6, the platform decided to give him a 24-hour feature block from Facebook and Instagram in light of the Capitol Hill events. This would have prevented him from posting anything for one entire day.

However, 14 hours into the feature block, Facebook decided that, actually, the best course of action would be to extend it “indefinitely and for at least the next two weeks.” This, conveniently, takes the feature block into the first day of Biden's presidency.

Again, users responded as you'd expect. Some said it was too little too late, some said that the ban action didn't go far enough, others even said that Facebook should lead the call for Trump's resignation.

Meanwhile, other users bemoaned censorship. One Janet Bowling even claimed:

You [Zuckerberg] and the media has what turned me into a Republican. I have been a Democrat my whole life and have never seen anyone treated the way Donald Trump was treated…shame on all of you!

In our view, this is, yet again, too little too late from Facebook. The platform has been used and abused by people who want to spread misinformation and sow discord. Pulling the rug out from under Trump on Facebook and Instagram feels an easy move when there are mere days left for his administration.

It's no secret that YouTube has become a hotbed of conspiracy theories and often acts as the thin end of the radicalization wedge.

However, rioters were even using YouTube to live stream their exploits as they stormed the Capitol. Naturally, recording yourself committing crimes is pretty stupid. But these videos also serve to embolden other people with similar political sympathies.

In response, YouTube has taken to removing videos and livestreams posted by the rioters. However, this is simply too big a problem to maintain. A simply search for “patriots” on YouTube will bring up videos such as this:

In this video, the host alleges that there were members of the leftist group ANTIFA storming the Capitol. Quite why ANTIFA (which, it has been argued, barely functions as a cohesive political group at all) would storm the Capitol building after Trump commanded his supporters at a rally to do so is unclear.

YouTube has said it is “working to quickly remove livestreams and other content that violates our policies, including those against incitement to violence or regarding footage of graphic violence.” However, YouTube's problem extend far beyond removing videos depicting the violence.

For what it's worth, Twitch was suffering from a similar spate of violent livestreams and has been trying to remove the videos.

Is Social Media to Blame for Trump?

Blaming social media platforms for Trump's ascendency is nothing short of trite. The forces that led to his premiership have existed for a long time in US politics.

Consider, for example, David Duke's abortive runs at President, as well as for Senator and for Governor of Louisiana the 1990s. Duke, if you're not familiar, was the former head of the Ku Klux Klan and is a self-proclaimed Neo-Nazi.

Of course, social media helped to disseminate Trump's message further. But it also helped that Trump was a well-known celebrity ahead of his Presidential run. How many of the 2016 Republican candidates can you recall?

Diverging ideas of what America could be, what it means to be an American, and what America's responsibilities to its citizens are have led to Trump's presidency. With wages stagnating across the US, environmental problems, and resurgent foreign powers including China, these questions will not be answered easily. None of these issues will be addressed by simply banning Trump from your favored social media platforms.

While Trump might be considered the first social media president, politically-motivated protests, riots, and attempted coups d'etat have occurred long before social media platforms existed. The events of this week will have Zuckerberg and Dorsey thinking hard about how their platforms have been used to spur along such events. But, one thing's for sure – taking Trump offline for a few hours or weeks won't fix the real world issues, or the harder questions being asked of the social media giants.