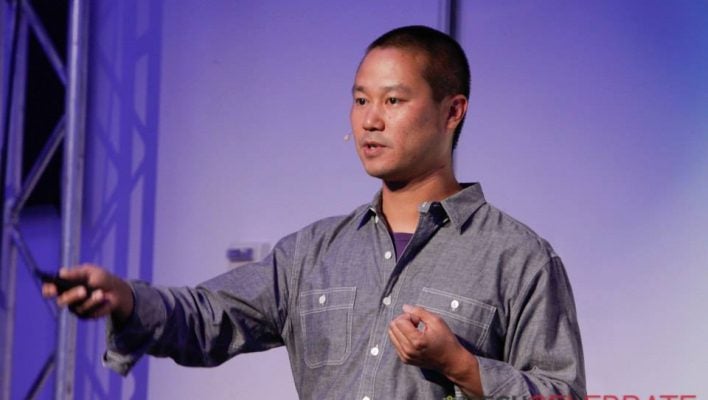 By Frank Gruber and Jen Consalvo

It’s with profound sadness we mourn the loss of a true visionary, author, mentor, thought-leader, investor, and friend, Tony Hsieh.

Readers may be interested to know that Tech.co has a history with Tony, as he became an investor in the company in 2013, and built a lasting friendship with us as the Tech.co co-founders. Tony was also our neighbor for 8 years in downtown Las Vegas, where the company grew its homebase and hosted monthly events for locals and visitors from around the world, with Hsieh’s Downtown Project.

Aside from the company, we had a mutual admiration for community, events, llamas, and clever jokes, as well as the science of happiness and self-growth. We also shared a passion for seeing others launch new ideas and grow them.

“Envision, create, and believe in your own universe, and the universe will form around you.”
― Tony Hsieh, Delivering Happiness: A Path to Profits, Passion, and Purpose

Under Hsieh’s leadership, Zappos revolutionized the apparel industry, and e-commerce in general, by being one of the first to prioritize customer satisfaction and service. To build trust in e-commerce with the greater public, his company came up with innovative ideas and fostered new customer behaviors. For example, removing the friction of mistakes and extra costs by sending a customer shoes in 3 sizes to see which fit best, with easy and free returns for everything. And removing time constraints on customer service team members so they could give customers the time they need, and delight them with special, unexpected offers.

Under his leadership the company grew into a billion dollar company acquired by Amazon in 2009. Most impressive, Amazon had Hsieh retain his role as CEO, and gave him latitude for projects like his famous book, Delivering Happiness, which spun out into a separate organization of its own; continuing to focus and build out the Zappos company culture; and testing new management paradigms such as Holacracy.

But perhaps most audaciously, the CEO launched the Downtown Project in downtown Las Vegas, which has been written about and discussed thousands of times over the years, and in our view, is still an ever unfolding story. Just like Zappos and Delivering Happiness, the Downtown Project businesses, festivals, events and stories have touched millions of people – and our hope is that it continues to evolve in the spirit of its visionary founder.

We had a front row seat for both Delivering Happiness and the Downtown Project efforts and you can watch the conversations and talks below from some of our past events where Hsieh shares his thoughts, insights, and view on the world. These videos may offer a glimpse into who Tony was and what he was all about.

2011 – Tony Hsieh interviewed by Frank Gruber while circling around Austin, Texas during South by Southwest on the Delivering Happiness bus.

2013: Tony Hsieh shares his vision of the Downtown Project in Keynote address.

2014: Tony Hsieh interviewed by Frank Gruber about the Downtown Project changes and growth, including audience Q&A.

Tony’s ability to drive a vision, not chase the money and be inclusive, including thousands of people in his endeavors with Zappos, Delivering Happiness, and Downtown Project, is enormously telling of his generous spirit and belief that given the right opportunities, anyone can rise to the occasion and do great things.

He knew that statistically, not all new endeavors would work out, but that was ok. The opportunities and effort mattered, and the overall impact mattered. His ability to ask questions that would nudge people to get out of their comfort zones, be themselves, and take action today on something that might make them happier (rather than waiting for someday) is something that inspired and impacted so many people.

The world is truly a better place because of the ripples of Tony’s inspiration across the globe. He inspired us, and will continue to do so through the many things we learned while working in his sphere. He was loved, and will be missed forever. Gone too soon, tragically at 46 years old, a fact that is still hard to believe.

Thank you for believing in us and rest in peace, Tony Hsieh.

Editor’s Note:
Frank Gruber and Jen Consalvo moved from Tech.co in 2018, after its acquisition by MVF Global, and onto their next venture, Established, which manages the Startup of the Year community. They invest in early-stage startups through Established Ventures, as well as their involvement in NextGen Venture Partners.

Jennifer McIlveen (OLY, BSc), is the Editor of Tech.co. As a former Olympic athlete and perfectionist she ensures world class site standards, drawing upon her 10+ years in digital media, including 6+ years in B2B technology reviews, with a special focus on software. Her work has been featured in Yahoo! Money, Business Insider and Inc, while her continuing passion for sport sees her as an outspoken voice for athlete welfare in Vice, Vox, the New York Times and more.