The composition of Silicon Valley has changed drastically throughout the years. From its origin as just another literal valley of the Earth, to its transformation as the home of major silicon chip manufacturers, to becoming a national hub for top tech companies and leading startups, the region has gone through major transformations throughout the years. In a recent Reddit thread, a user posted a map of Silicon Valley companies in 1991 – an image taken from a Seagate calendar printed for that year.

Renowned as the home for the world's leading companies in technology – with a long-running history in the industry (its roots going all the way back to Stanford University's early – and still on-going and prevalent – role in developing the region) – Silicon Valley has grown to represent the birthplace of American tech innovation. Indeed, companies like Hewlett-Packard, Intel, and Apple originated in the California region, and continue to lead sections of the technology industry up to this day. And – as the map displays – the same was clearly still true in 1991: the three companies, as well as companies like Symantec, IBM, and Oracle seem to have had a prominent presence in the Valley back in the day as they do today.

While Silicon Valley is now home to some of the leading tech startups and big-name tech companies, this map of Silicon Valley companies in 1991 is both beautiful and haunting. The image itself – while colorful and conveying a tone cheerfulness – is frightening when framed within the greater context of tech history. The dot-com bubble, which took place a few years after this was drawn, led many companies in the region to completely shut down (with companies like Everex resorting to bankruptcy and an eventual acquisition). Hope it doesn't keep you up at night! (Happy Halloween?).

Here's the map of Silicon Valley companies in 1991: 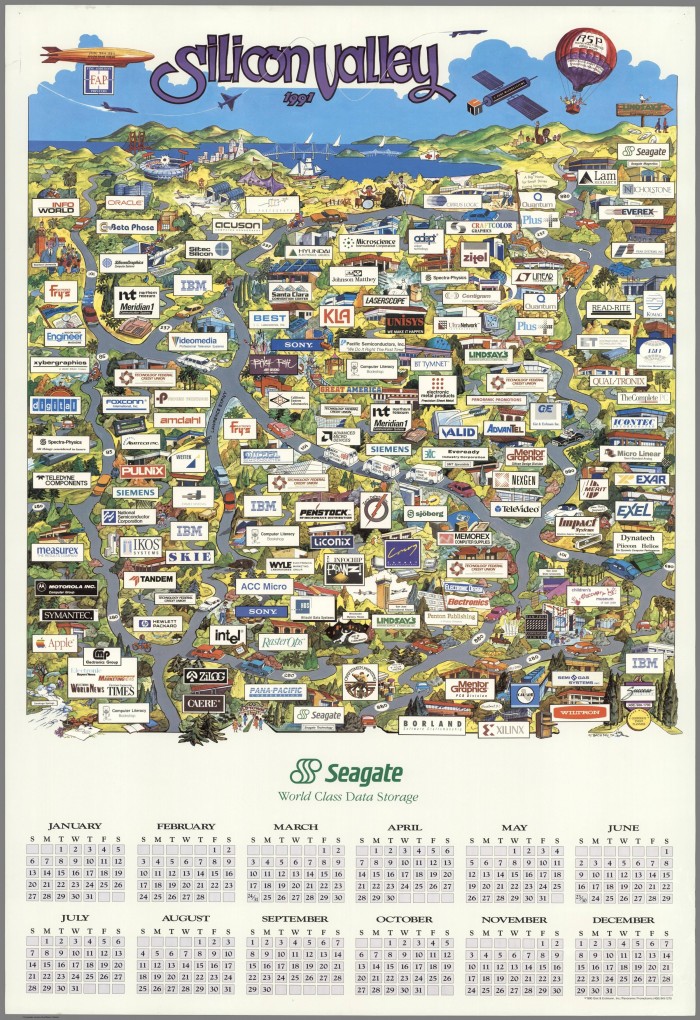