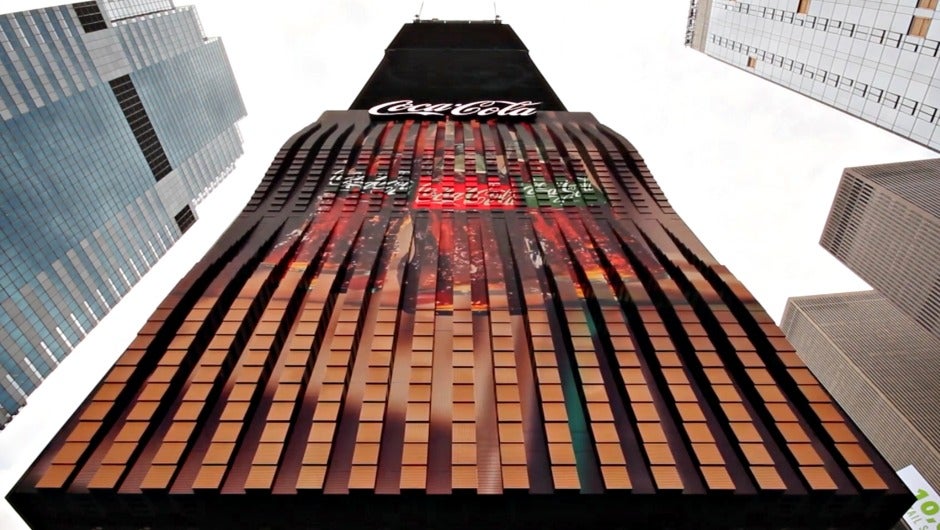 Who says billboards and advertisements doesn’t work anymore? Certainly not one of the largest and most popular brands in the world, Coca-Cola. Earlier this month, on August 8 to be precise, the beverage brand officially unveiled the world’s very first 3D robotic sign in Times Square. Unlike your standard billboards or giant digital monitors, the 68 foot by 42 foot sign consists of 1,760 independently moving LED screens.

Each LED screen is choreographed to match the advertisement on display, which in turn should draw the attention of the 300,000 or office workers and tourists who pass by the intersection. During the reveal, Guinness World Records was even onsite and awarded Coca-Cola two new records, one for the largest 3D robotic billboard and the other for it being the first 3D robotic billboard.

“From the beginning, our brief was to create a pause-and-refresh moment in the crowded environment of Times Square,” stated Kim Gnatt, group director, Business Strategy, Coca-Cola North America. “Our proprietary 3D technology brings our iconic brands to life in a unique and differentiated way that will hopefully catch people’s attention and make them want to engage for a longer period of time.”

More than just a random assortment of ads on display, the billboard programming will be based on the time of day and day of the week, with all programming catering to both commuters and tourists. For example, right before lunch time, an ad may appear that focuses on meals that can be paired well with Coke.

The brand likens this approach to that of how we now build playlists for different activities in our day-to-day lives. Certainly no stranger to advertising or taking bold leaps to appeal to consumers, Coca-Cola first launched a billboard in Times Square back in 1920. The former version launched in 2004 also featured a first-of-its-kind motion technology.

According to Investopedia, it costs between $1.1 million and $4 million per year to advertise in Times Square. With a potential reach of about 150 million eyes on the ads each year, the cost breakdown is less than two cents. Coca-Cola did not release specific information or numbers regarding the cost of their latest record-breaking billboard; however, they did state it took about four years to create.

“Since Coca-Cola’s first appearance in Times Square nearly a century ago, the brand has been a leading innovator, from creating one of the famous intersection’s first neon signs to being one of the only installations with a nighttime light display in the early 1990s,” said Coca-Cola Archivist Ted Ryan. “Times Square – like Coca-Cola – is timeless and connects people from all walks of life.’”