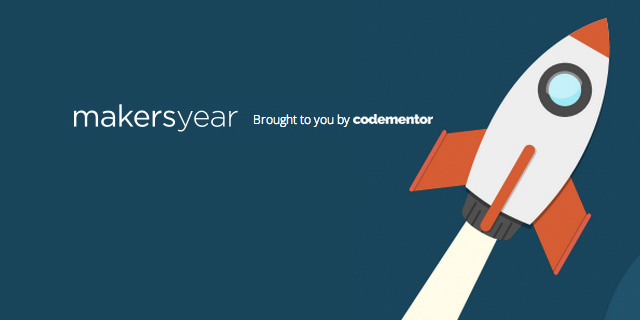 Before founding Codementor, Weiting Liu graduated both Y Combinator and Techstars, experiencing first hand how helpful expert mentorship is for launching successful projects. In a smilar vein, he decided to start Codementor in an effort to help developers, in real time, with one on one code help from over 2,000 vetted experts via screen sharing, video, and chat.

In celebration of the new 2015 year, Codementor officially announced the launch of a New Year's resolution movement: Makers Year, or #MakersYear.

“YC and Techstars can only afford to help 1% of startups.  Makers Year helps the rest 99%.  We're creating a movement to get more projects to be launched this year,” says Liu.

The Codementor crew will be teaming up with Moz and Digital Ocean to launch the #MakersYear campaign. It was built specifically to help creators launch new apps in 2015 by providing resources for coding, design, marketing, and PR; Codementor estimates they’ll be able to help over 20,000 different creators and developers through #MakersYear.

“Individuals working on very early-stage projects or side-projects can be very lonely without the resources offered to startups backed by accelerators,” says Liu. “We're creating a movement to get more projects to be launched this year.”

Long term, Liu is hoping that #MakersYear will help coders take their skills further and launch as many new projects in 2015 as they can. That, in turn, will help spark new innovation and growth across a multitude of tech sectors. We'll keep you up to date on anything interesting coming out of Codementor and #MakersYear as 2015 pushes forward.