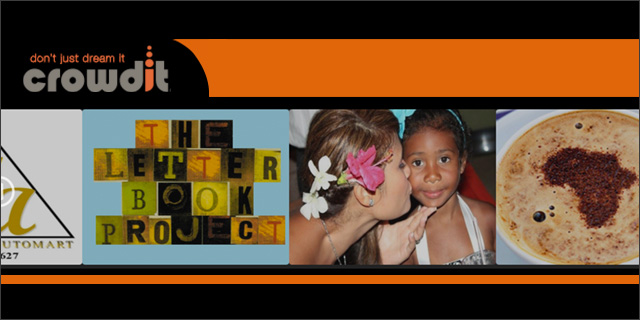 A site called CrowdIt launched publicly today, hoping to stand out among a new wave of crowdfunding sites by offering business incubation, as well.

Since March, CrowdIt has amassed around 150 projects in the tech, creative, and nonprofit industries. They range from KC Dream Cars, exotic car rental for Kansas City, to Bioplastics, which wants to eliminate the use of oil in plastic-making, to the Kitty Barn for rescue cats.

CrowdIt is starting out with reward- and donation-based crowdfunding similar to Kickstarter. To contribute, backers have to purchase a virtual currency called “funz.” In the future, they plan to offer the new equity-based crowdfunding made possible by the JOBS Act: non-accredited investors (regular people who don’t meet certain income thresholds) will be allowed to fund projects in exchange for equity (and, potentially, big returns).

CrowdIt charges a 5 percent fee to successful projects and a 10 percent fee to unsuccessful ones (plus credit card processing fees). That’s slightly higher than Indiegogo, which charges 4 and 9 percent, respectively.

Besides offering incubation, CrowdIt hopes to gain traction by crowdfunding the application process, as well: eventually, users will have input into which projects are accepted on the site. If you join CrowdIt early, offer lots of mentoring, or contribute to enough projects, you’ll earn the right to review submitted projects and vote yes or no on them.

The incubator itself is somewhat crowdsourced, too. Industry experts can become mentors, nicknamed “suits,” by submitting qualifications like a post-grad degree or professional certification (such as a CPA). Along with mentorship, project creators also get networking opportunities and access to services like marketing and legal.

When the JOBS Act passed last April, the SEC planned to enact the crowdfunding legislation by December 31. Now, it looks like that won’t happen until late 2013 or early 2014, says CEO Jason Graf. But he’s already preparing to turn CrowdIt into an equity crowdfunding hub. He’s partnered with CrowdCheck, which will help protect investors by judging the legitimacy of projects, and CrowdBouncer, which will verify that backers don’t exceed their yearly investment quotas.

CrowdIt is based in Springfield, Missouri, and their vision is to help small businesses and creators across the country bring their ideas to life. “At CrowdIt, we believe everyone at some point in their life has had a dream that never came true due to a lack of capital,” they say. “Now . . . those dreams can be a reality.”