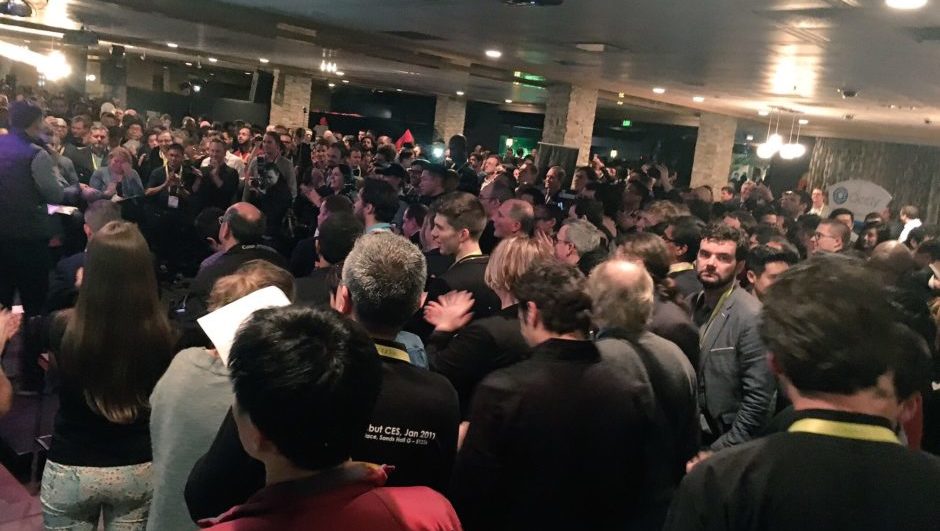 Beyond the lights of the Vegas strip, the Elvis impersonators, and the brightly colored slot machines, fifteen startups competed for the top spot at Tech.Co's Startup Night, a CES 2017 event dedicated to showcasing new companies and their innovative tech. The competition was heated over who would go home with the prize, but two companies made their presence known and were crowned the winners.

Two startups, CUJO and In & Motion came away victorious after showcasing their innovative technologies in downtown Las Vegas for entrepreneurs, investors, and CES attendees. These two companies, while focusing on the importance of protection, have taken very different approaches to keeping people safe in their pursuit of startup success. CUJO and In&motion are now the first two startups to be entered in Tech.Co's Startup of the Year competition, which culminates at Innovate! and Celebrate in San Francisco, CA.

If you're interested in finding out what made these startups shine at Startup Night, meet them below and check out the other participants to see who they were up against:

Simply put, CUJO puts to bed all the security concerns surrounding smart home technology. As a smart firewall that guards all devices in your connected home, CUJO provides the peace of mind you need when it comes to adopting this kind of tech into your life. It can protect your smartphones, laptops, TVs, baby monitors, and any other smart device that may be hooked up to your home network.

While all this might seem a bit overly complicated, trust us, it's not. With a comprehensive mobile app and simple setup (just plug it into your router), you don't need to be as clever as the smart home you're trying to protect to get started. Some of the key features include business-level internet security, multiple device protection, and blazing fast speeds that will not slow down your network. Plus, with parental controls launching this year, you can secure your family's network with ease and grace.

When asked about how they felt about winning Tech.Co's Startup Night, the El Segundo-based startup couldn't hold back their excitement:

“It’s a huge milestone for us,” said Indre Deksnyte, CTO of CUJO. “We truly believe that the world will be a better place with IoT security lock down and it’s been a bit of a challenge to get the industry to realize that. We’ve seen with recent attacks how devastating large bot nets can be and DDOS where all these homes are participating unknowingly and it’s a little bit of vindication to be able to get the judges to realize that we are a valuable spot in the market.”

The autonomous system is capable of quite a bit in terms of protecting its users. It can detect an unavoidable fall and inflate in less than 100 milliseconds in order to protect the most sensitive areas before the impact with the ground. While wearable tech has mostly been limited to smartwatches and fitness trackers, In&motion proved at Startup Night that smart clothing could be the future of the burgeoning tech.

We had a chance to catch up with In&motion after the win, and their excitement about the future was palpable:

“It’s tremendous,” said Pierre-Francois Tissot, CMO & cofounder of In&motion. “Last year was our first year as we came to Vegas, and this night we have a chance to pitch. And coming from France, it’s tremendous and we hope that we’ll head first together with as many people for the US bike revolution.”

While everyone can't be the winner, the startups that showcased their revolutionary tech for Startup night at CES were so impressive that leaving them out would be a true travesty to innovation. Make sure to check out the companies below, as they will likely be winning other competitions in the future:

Tech.Co is on the ground at CES 2017 in Las Vegas and we’re covering everything from new tech to innovative startups. Follow our coverage here and make sure to check out all the brand new gadgets hitting the market after the festivities have concluded.