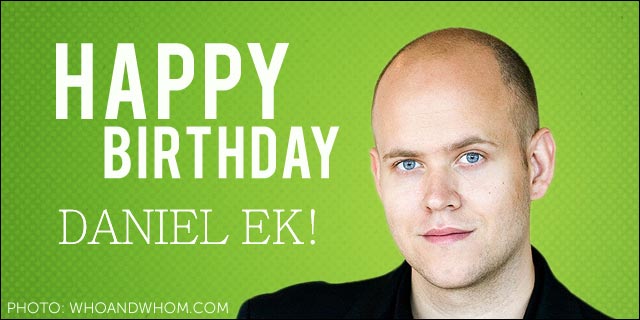 At some point today you’re going to listen to music on Spotify; it is Friday after all. All we ask is that you take 4 or 5 minutes to listen to one of your favorite songs, jam out, and go crazy dancing. You should do this because it’s Daniel Ek’s birthday today, and he’s the reason we all get to enjoy the awesomeness of Spotify.

Mr. Ek was born on this day in 1983 in Sweden, and he got his entrepreneurial start at the young age of 14 in 1997. To Ek, there were a lot of interesting problems all over the world that needed solving and he felt that he had to do it himself.

Some of his earlier ventures include Advertigo, a company that was bought by TradeDoubler, as well as the Nordic auction company Tradera which was later acquired by Ebay. He worked his way up to become the CTO at Stardoll before moving on to the CEO role at uTorrent, possibly one of the largest and most popular BitTorrent clients to date.

Then in 2006 Ek set up Spotify AB in Stockholm which officially launched its legal music streaming service in October 2008. We all wish you the happiest of birthdays today, Mr. Ek, and we’ll all be listening, dancing, and partying to celebrate via Spotify.