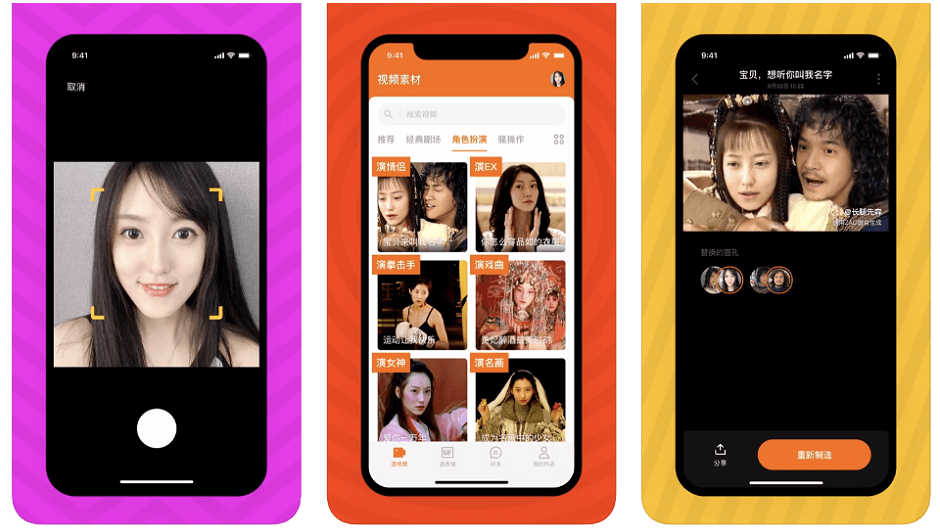 The app, which only launched on Friday, lets users graft their own faces onto movie clips, essentially letting them cosplay as Leonard DiCaprio or Wolverine within seconds. It's only available in China, where it's a massive viral hit.

Zao's success has spurred plenty of concerns about privacy violations and the future of face-swapping technology, some of which carry more weight than others. Here's more on why the app has taken off so quickly and why people are worried about it.

The app is likely the best example of “deepfake” technology available today. Deepfakes ⁠— that term is a combination of “deep learning” and “fake” ⁠— are programs that use artificial intelligence to overlay a new face onto video footage of someone else. Here's a clip of the app in action.

In a Twitter thread, indie game developer Allan Xia suggested a few other potential applications for this tech: A movie or TV show could include the viewer as a character, or advertisers could market to viewers with footage of that viewer enjoying a product.

As the focus on memes indicates, Zao's success is built on its usefulness as an internet novelty. Anyone can post their own version of the app's footage to their social media account for a viral clip that both turns them into a movie star and natively advertises Zao to even more potential customers.

While Zao is only available in China, deepfake apps have garnered criticism in the West, as well. In July, FaceApp exploded to prominence by turning pictures of young people into old people. Both apps offered easy, free-to-download fun, but come loaded with the same privacy issues.

It's easy to see why some users are wary of Zao. Actually seeing your own face immediately and (fairly) convincingly dubbed over video footage is disconcerting. Some are worried about the fact that everyone's selfies are being hosted on servers in the pervue of the Chinese government, while others are worried about the broader implications of deepfaking technology becoming widely usable.

“We are exactly 30 seconds away from this tech being used to end a marriage, wreck a career, put someone in prison, or start a war,” author Myke Cole said in a widely retweeted comment that represents one of the stronger reactions.

Is Zao specifically helping China build a database of faces? Probably not. In China, where surveillance cameras are common, the government already has the data it would need. A commercial app that only requests one image per user is a step down from the lack of privacy typical of social platforms worldwide. But, since the face-swapping technology is so impressive, Zao is an easy target for our fears of technology's future.

A bigger concern was Zao's user agreement, which gave the app's developers full rights to use any uploaded selfies for anything. Zao quickly updated this agreement after a backlash that included a ban from ubiquitous social platform WeChat, and it now says that the selfies won't be used for anything other than the app.

Why the Backlash Is a Little Overblown

While the actual inner workings of the app are a little opaque, it's very unlikely that the app can actually slap your face onto any video footage within seconds. Instead, it probably has a cherry-picked list of well-known clips that its AI is trained to quickly retarget any generic face onto.

In other words, this isn't a groundbreaking technology that can spin up false news clips in real time. It's just a smartly marketed app designed to go viral based off the same principles that power Apple's Memoji.

We don't yet live in a world that can transpose anyone's face onto any footage immediately, even if that future isn't totally out of the question.

Also, if we're going to worry about deepfake technology being used for political misinformation, let's not forget that misinformation doesn't really need to deepfake anything believable to be perfectly successful, relying instead on devaluing information through sheer numbers.

In other words, the backlash against viral apps like Zao is mostly overblown because there are plenty of bigger, more important privacy and misinformation problems to worry about.

This isn't from Zao, but it's a good look at how deepfaking tech can add Nicolas Cage's face into any video. (Credit: Wikipedia)

If you're going to be cynical, you're better off shooting higher than at a party-trick viral app, even if it's upsetting that Wolverine can now have your mom's face.