I can’t believe it’s already Friday: what a week it’s been. Looking back on my time in Denver, it’s hard to put into words how meaningful the experiences I had and the people I met at Denver Startup Week were.

Without a doubt it was one of the most influential and inspiring weeks of my professional career to date. However, that’s only one small layer of what made Denver Startup Week amazing.

Before I flew to Denver, everybody kept talking about how Denver Startup Week was magical. Admittedly, I didn’t quite get a grasp on what they meant until I got there and saw firsthand what all the fuss was about.

As I embedded myself into the fabric of the Denver entrepreneurial ecosystem, I began to realize that a big part of this magic is the people. Every single event, panel, workshop, or session I went to was packed to the gills.

You’ll be sitting there and somebody you’ve never laid eyes on will sit next to you. Before you know what happened, the two of you are fast friends talking like you’ve known each other for years. That’s magic.

“This community led core is the engine of the week. The uniqueness is that you have 10 to 15 thousand people who feel like it’s their week. By having a hand in the outcome, everyone feels like it’s theirs,” says Mitisek. “That magical element is what helps us scale so quickly and what makes us so successful because it’s truly the story of what makes the Denver startup community, and it’s the story told by the people.”

Mitisek is right on the money with this, and I think that’s what I was trying to piece together in my head. Even though I live in San Diego, I felt like I was part of the Denver startup ecosystem, and I felt like my Denver Startup Week experience was tailored specifically for me. That’s magic.

“We had more events than we’ve ever had: more than 233 in five days. Over 200 of them were community led,” says Mitisek. “To have 200 unbridled community led programs being the voice of Denver is just incredible.”

What really gets me here is that this element of magic via the community is, as Mitisek tells me, 100 percent intentional. In fact, it’s a big part of what helped drive 10,000 attendees to register for Denver Startup Week 2015. 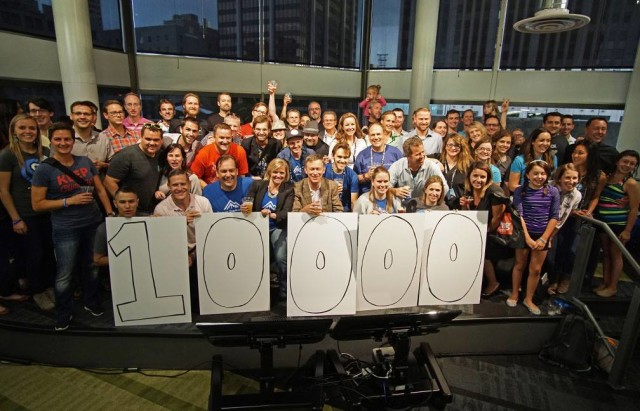 “Given the milestones we’ve had this year, clearly the registration numbers, it’s by far and away the largest free entrepreneurial event in the US and it continues to grow. As we get closer to the end of the week my anticipation is that we’ll probably break that 12,000 attendee mark,” says Mitisek. “Get this: in four years we’ve gone from zero attendees to half the size of SXSW Interactive.”

Not only has Denver Startup Week grown to half the size of SXSW Interactive, it’s a completely free event with no barrier to attend. This year was the fourth official Denver Startup Week, and it’s all possible because community members like the Downtown Denver Partnership, the Colorado Technology Association, and a small group of startup leaders banded together in 2012 to make sure Denver had its moment in the sun. That's magic.

“The structure of DSW is truly a platform for all startups and entrepreneurs in the US,” says Mitisek. “You should come to Denver Startup Week next year because, regardless of your role in the community, we welcome everybody from across the US to visit Denver, our community, understand the velocity of or community, and continue to drive the best tech.”

Even though Denver Startup Week is coming to a close, the magic will live on in each and every attendee who helped make the last week a smashing success. From the bottom of my hear, I want to thank everybody who helped show me one of the best times in my life.

If you’re too impatient to wait until next year, don’t worry because there are plenty of other Stratup Week events happening across the US this year. In fact, this was the third year that Chase supported Denver Startup Week, and they liked the program so much that in 2015 and 2016 they’ve decided to scale the model out to other cities in the US.

Editor’s Note: This article is part of a Startup Week content series brought to you by Chase for Business. Startup Week is celebration of entrepreneurs in cities around the globe. Chase for Business is everything a business needs in one place, from expert advice to valuable products and services. Follow the Startup Week action here as we head to 7 cities in the coming months.