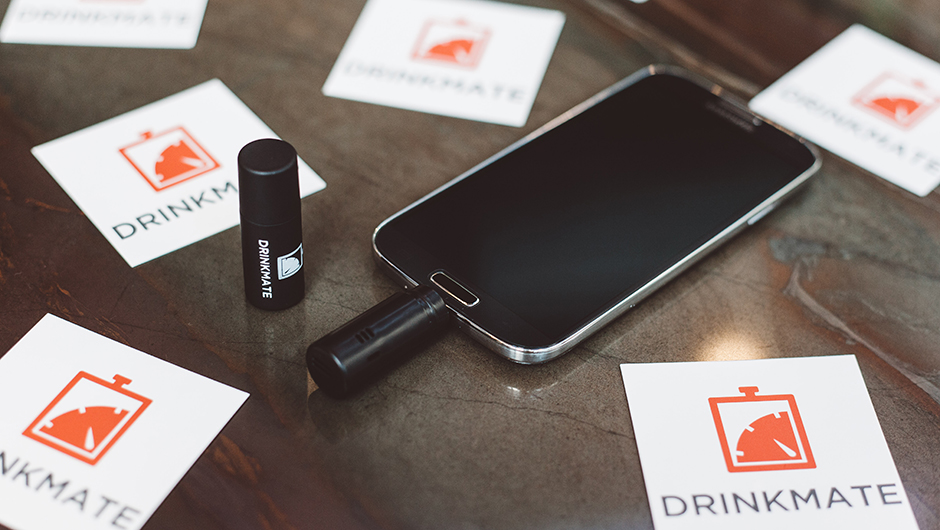 Last month a room full of eager entrepreneurs, techies, and everyone in between heard pitches from several startups in the DC area for the Startup of The Year Competition. Among the startups was DrinkMate CEO and Founder Shaun Masavage, the creator of a smartphone powered breathalyzer. Today, after only four days into their KickStarter campaign, they have officially met their initial fundraising goal of $35K.

With the KickStarter success rate being around 37%, this puts the Arlington, VA based startup well ahead of the curve. In fact, 13% of campaigns don’t receive any funding, and only 12% of all successful KickStarter campaigns have raised more than $20K (up to $100K). However, Masavage is no stranger to successful crowdfunding campaigns. Last year they raised more than $99K with a goal of $40K on their Android version. Although DrinkMate is not the first smartphone powered breathalyzer, it has some unique features.

When asked what sets his gadget and app apart from the others Masavage said, “DrinkMate is the next iteration in breathalyzer design and what the market is demanding. There are challenges, but it's up to us innovators to figure it out! I got the idea in 2013 while working at a large defense contractor. Smartphone breathalyzers had just started to come out, but they weren't being innovative.”

Rather than repackaging the same internal parts, Masavage used his Electromechanical Engineer background and paired it with a small team to build new hardware from scratch. “I focused my design on what a person would actually carry (such as a ChapStick) and made it even smaller! There is no battery that needs replacing and no recalibrations that would require it to be sent back.”

When it comes to launching apps and hardware, one of the most common dilemmas startups face is what platform they should develop for initially. For Masavage, it came down to the restrictions, rules, and supply requirements that Apple puts in place, which led the team to start with Android. Due to Apple's proprietary Lightning cable that forces hardware developers to purchase the parts directly from them, there are also added costs.

So why not use bluetooth? Masavage said it would cost more and require the device to have a battery. Although they first launched on Android they believe 80 to 90 percent of their sales will actually come from iOS users once it hit shelves.

In addition to using these funds to expand from Android to iOS, the team plans to continue expanding outside of the US and adding more social features to the apps. “We're currently in talks with major retailers and distributors. DrinkMate is tremendously popular internationally, so we're expanding with hopes of becoming a global community,” said Masavage. “We're building out app features that will be fun and shareable. The idea is that the more people who know their location and BAC, the safer the group is as a whole.

Based on the current project plan, backers can expect to have their DrinkMate in hand by October. For science, I've backed the campaign so we can review it. Until then, Masavage will be partaking on a Pisco sour, “some people think the egg white thing is weird, but I love it. Del Campo in DC makes a killer smoked Picso sour.”