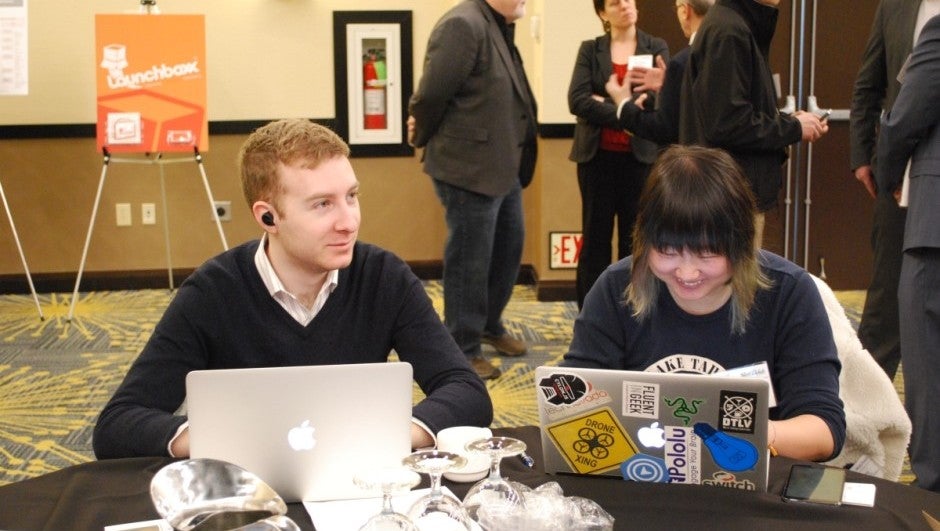 Las Vegas, NV-based startup Dronesmith Technologies wants to be the Unity of the drone industry. It's an interesting thing to say, considering Unity is an independent gaming platform that independent game developers use to build video games. Very different from the world of unmanned aircraft systems…at least, one might assume.

But Dronesmith co-founders Jinger Zeng and Greg Friesmuth beg to differ. In fact they see a startling amount of similarity between the game industry and the beginnings of the drone industry.

Take a look at the history. They trace it back to before the introduction of Unity, when game development was done primarily through the major gaming studios. “Not only did it cost a lot, but it was also very difficult to develop games,” Friesmuth said. Zeng added:  “You needed a publisher and a game developer studio in order to make serious games. It cost millions of dollars.”

Then, around 2006, Unity came along with a mission to democratize the game development world. They targeted the developers, the people with little money but a lot of ideas, and created an affordable tool to use in indie game development.

Suddenly, gaming companies weren't just the mega studios; they were friends in a basement building mobile apps, or a guy with a lifelong dream to be an indie game developer. Unity shifted the entire gaming industry, Zeng said. Now, Unity has 47 percent market share of the mobile gaming world. “They understood the market,” Zeng said.

A similar breakthrough is inevitable for the drone industry, according to Zeng and Friesmuth. After over a year of attending drone trade shows, including the North Dakota UAS Summit in February 2016, the two cofounders said over and over they see a similar problem: lots of people building drone technology, but in a way that is overpriced and inaccessible.

“There are a lot of startups…but they are only selling to people like big construction companies, or big energy companies,” Zeng said. “It's not democratizing it for, let's say… just a couple guys who are trying to start a business to service a couple farms…But nobody cares about them because they also don't have money.”

This is the driving force behind why Zeng and Frismuth, while students at the University of Nevada – Las Vegas, started Dronesmith Technologies (formerly Skyworks). The company started out with a goal to create a drone for the education field, but what emerged was a software that they describe as “the brain of the drone.”

But really, it's name is Luci.

Luci is an on-board Intel Edison chip on a credit card-sized design, that can be attached to any drone. In doing so, the drone is then able to be wirelessly programmed to do whatever the “dronesmith” desires.The cost? $386.00.

“I could go buy a system that weighs 5 pounds and put it inside a big massive drone, and then $100,000 later I have a solution,” Friesmuth said. “Well with this guy [Luci] for four hundred bucks your drone now became an intelligent platform.”

“To us it's about serving the under served, and making the technology more accessible with an affordable and easy tool,” Zeng said.

Right now, Friesmuth said, many drone startups have unique ideas for how to use drones, but are forced to program them from the ground up. Or, they use an autopilot product called PixHawk, which was never meant to be used in this way, he said.

“Really what the problem in the drone industry is, is everyone is reinventing the wheel,” he said. “It's wasteful that everybody in the industry has to do that from the ground up every single time. With Luci…you're just building what you want it [the drone] to do.”

‘Democratize the industry' is their mantra, just as it was for Unity in the world of gaming. In fact, Unity founder David Helgason is one of their advisors (along with co-founder of CodeBaby and the Head of Rapid Rollout Plan at Alphabet.)

Investors are backing it up, too. So far Dronesmith has raised $1.1 million in four rounds from six investors, since their launch in February, 2014 according to CrunchBase. Currently they're working to promote Luci from their headquarters in Henderson, Nevada.

Ultimately, their hope for Luci is that it makes programming drones on a customized platform accessible – particularly for younger drone enthusiasts.

“We really want to educate the next generation of drone pilots,” Zeng said.