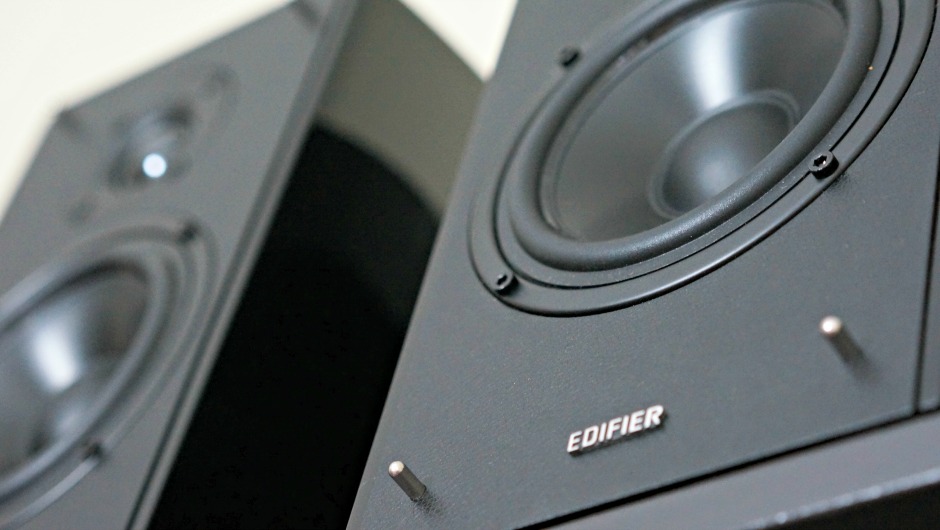 For more than a decade, Edifier has been producing high-end audio and home theater hardware, but without a lot of the fan fare from brands like Klipsch, Polk, or Pyle. In the past few years however, they’ve begun producing some of the higher rated sound bars, bookshelf speakers, and even audio systems for gamers. Their other genre, which are now typically replaced by the likes of Sonos, perhaps Apple’s upcoming HomePod, or the Bose Sound Wave, are traditional bookshelf speakers. Unlike Edifier’s counterparts, their speakers have a simple design, are not filled with bells and whistles, but their focus is on producing high quality sound.

We got our hands on the latest R2000DB bookshelf speakers to see if they would fit well in our test bachelor pad, put them through several audio tests, blasted some terrible EDM, and watched a few dozen YouTube videos and movies through a computer to see how they pan out.

What makes a set of bookshelf speakers great? High-quality sound of course, and that means tackling the highs, mids, and lows. Beyond that, everything else is a nice to have.

Having put the R2000DB’s through a series of audio tests, tweaking of the treble and bass knobs, and through the various inputs, we found that overall these speakers rock. Plain and simple, they push out crisp sound, with some booming bass, and it doesn’t garbled as you push the volume up.

When we turned the R2000DB’s up to 11 (not literally), this was basically the result:

One of my chief complaints from audio nowadays is that the concept of turning something up to an 11 really just doesn’t exist. With the R2000DB, you get that and then some. While testing, I properly pissed off both sets of neighbors (shared walls in a townhouse). The bass, even though it’s not a subwoofer, does a fantastic job of adding some thumb to your music or videos, and it doesn’t rattle the set nor the bookshelf.

Beyond the basics, as these are bookshelf speakers they don’t require a receive nor subwoofer, but you can of course connect them to either using the optical port or crossover. Other than that you’ve got Bluetooth 4.0, 3.5mm to RCA, and RCA to RCA, with each of the necessary cables included. I do have one minor gripe, and this is some first world problems stuff, that the bluetooth connection can only support one device at a time. Meaning if you want your laptop and phone connected, it will only work with one. The other device will have to disconnect before the connection appears in discovery again. On the flipside, the latency between video and audio on Bluetooth is quite minimal, whereas most devices look like they have been poorly dubbed. Obviously with the wired connections you won’t have that issue at all though. 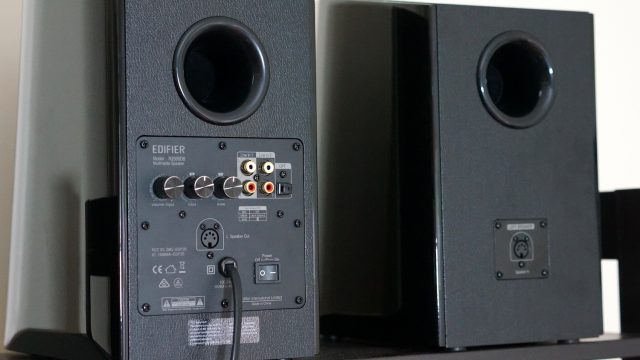 Overall we found the Edifier R2000DB bookshelf speakers to produce high quality sound and doesn’t get muddled as you jack up the volume.

Edifiers R2000DB bookshelf speakers follow the standard design for the hardware type. They appear a bit bulky in nature, have your typical mesh cloth on the front, and ports and controls on the back. Between the two colors, piano black and cherry wood, these likely would fit in with most bookshelves without standing out too much. However, and this is simply preference, the newer flagship bookshelf or corner table speakers are starting to minimize the design and they do look a bit better in modern settings. 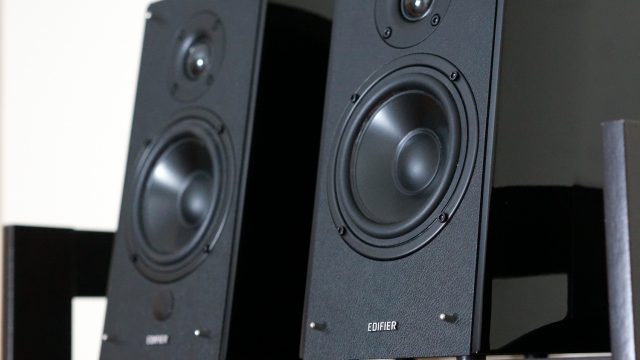 Though the speakers have connectivity through Bluetooth, between the two speakers there is a 10 foot long cable. This may be in part why the latency is almost not there, but this cable is worth being aware of as it’s a bit bulky. We hid it behind a backdropped section of a bookshelf and didn’t find it to get in the way.

The only downside to the design is the included remote controller. It can work at a distance without issue, but the feel, material, and even button functionality of it just seems cheap. It also only has volume control settings and two audio settings, rather than adjusting the treble and bass (you have to change that on the back).

Overall the design of the R2000DB speakers look about as much as you’d expect from bookshelf speakers, but won’t wow anyone either.

Should you buy Edifier’s R2000DB Bookshelf Speakers? If you want big sound at a reasonable price, hell yes. If you’re looking for something you can control with an app, has a lot of bells and whistles, or [insert marketing buzzword for room filling sound] then these likely won’t do the job. Through our tests we found the R2000DB speakers to produce incredibly balanced, high quality sound, and caters to bass lovers without the sub. We also were surprised to find that the bluetooth latency that typically occurs when watching video was also close to null, so these are absolutely usable for watching content from your computer or mobile devices. The only real downside we found was in the remote, which feels cheap and only has basic controls. Overall we’d say these speakers rock and can certainly recommend them.

Where to buy: Amazon, Edifier