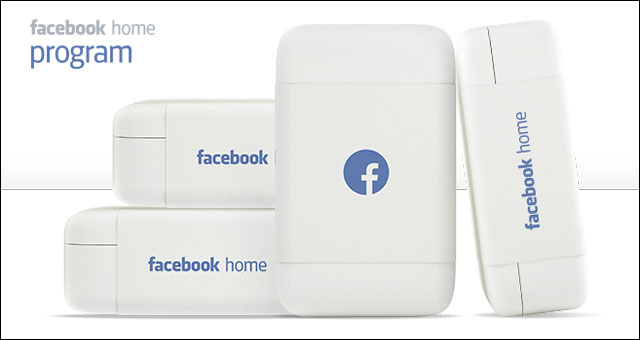 “Today our phones are designed around apps and not people. We want to flip that around,” Facebook founder and CEO Mark Zuckerberg explained.

The whole focus of Home is to put your friends as the center of your mobile experience, an experience that until recently was only done on mobile devices through Facebook apps and the mobile web. Home is not an app or an operating system but more like a plugin that is a hybrid of the two. It is more ever-present than an application and sits on top of your operating system to give you more instant access to your Facebook feed, of which Facebook is calling Cover. It also includes chat messaging and easy access to apps.

Home will be available as a free download from the Google Play Store starting April 12. Home will work on the HTC One X, HTC One X+, Samsung GALAXY S III and Samsung GALAXY Note II. Home will also work on the forthcoming HTC One and Samsung GALAXY S4, and on more devices in the coming months. Home will also be available pre-installed on phones through the Facebook Home Program. HTC and AT&T are the first companies working together to deliver a phone with Home. It's called the HTC First and it goes on sale April 12. We wanted to reimagine the way we all use computing devices to make us more connected and bring us closer to the people we care about.

So there you have it, Facebook is looking to Home as their first real delve into creating a phone that puts your friends front and center. This could prove to be an important move as Facebook looks to have more control over the first point of contact – your mobile device. It seems like a necessary move as Amazon, Google, and Apple all have mobile devices.  That said, we won't really know how it works until the Facebook Home comes to market on April 12th.