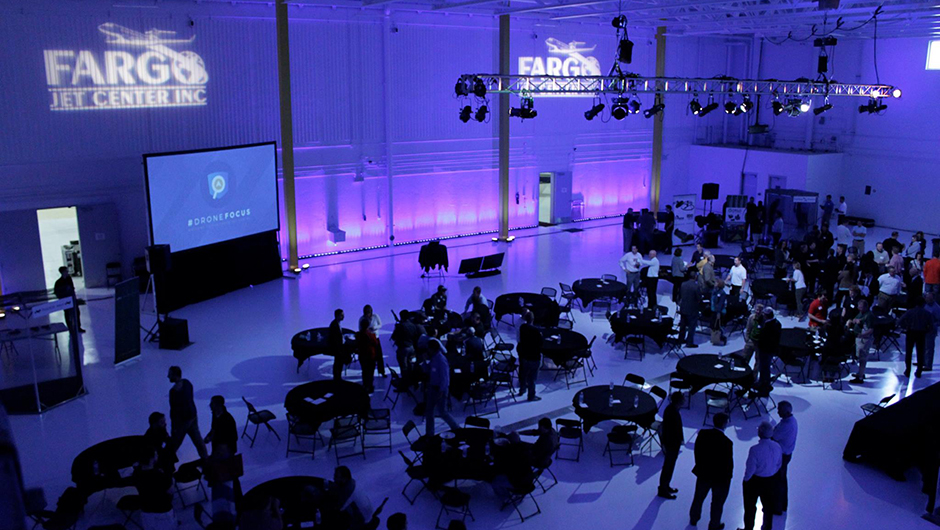 The air filled with whirs and hums of tiny drones at the Fargo Jet Center in Fargo, North Dakota for the city's first annual Drone Focus Conference on June 3, 2015. The conference, organized by Botlink and Emerging Prairie and powered by RDO Integrated Controls, was the city's first inaugural drone-focused conference, and featured five keynote speakers, drone pilot practice, and a Battle-Bots inspired drone throwdown competition.

A gated space labeled “Practice Area” stood to the left, equipped with tiny drones, while to the right Grand Forks startup Field of View set up a “Dueling Drones” area.

The speakers for the event hailed from across the country, bringing a variety of perspectives from all segments of the drone industry.

Bob Becklund, Executive Director of the Northern Plains UAS Test Site, presented a UAS Test Site 101 course to attendees, highlighting how their strong relationship with the Federal Aviation Administration (FAA) can be used as a benefit to anyone in the industry.

Matt Hayes of RDO Technologies gave live demonstrations of some of their latest drone technology, which utilizes 2D and 3D mapping. He presented the eBee, an autonomous fixed wing drone that specializes in mapping terrain. Through live simulations, he walked the crowd through the capabilities of these drones in mapping anything from stockpiles to corn fields, and then using infrared and 3D rendering to gather specific data on the land.

However, Dr. John Nowatzki, an agricultural machine systems specialist with North Dakota State University, said he sees a lack of research in the drone industry – particularly with his work in crop and livestock production. As a result, he said, farmers are hesitant to adopt the technology.

“Before this industry can do everything it says it's going to do, it needs more research,” he said.

He extended an invitation to collaborate with NDSU on conducting further research – particularly in areas where he sees challenges, such as image degradation and data management.

Shawn Muehler and Terri Zimmerman, COO and CEO of the newly launched Botlink LLC, also did a live interview about their new platform, which enables real-time flight tracking as well as solar-powered drone components allowing for flight times of up to 4 hours.

“We hope to see Botlink capture the market share, and we want to double the attendance here,” Zimmerman said.

The conference wrapped up by hearing how drones can also be used as an educational tool. Jinger Zeng, co-founder and COO of Las Vegas-based startup, Skyworks Aerial Systems, is part of a team that created an educational build-your-own drone kit called Eedu, designed to train kids from 9-12 in drone assembly, capability, and in coding software.

“When you think about it, they [the students] are the future who will be running the drone industry,” Zeng said.

Zeng first heard of the drone industry work in North Dakota after meeting some Fargo locals competing in Tech Cocktail's annual Celebrate conference in Las Vegas. Since then, she's formed close relationships with local startups in the industry.

“I love the ‘make-things-happen' vibe in Fargo,” she said.

After Zeng's presentation, things got lively. Live camera footage from a GoPro within the Drone Dueling cage filled the screen, where drone pilots engaged in a drone throwdown. Pilots competed for a chance to win a Blade Glimpse HD Camera Drone, valued at $179.

On the other end of the hangar, newbies dabbling in the drone field got to try their hand at drone piloting (including yours truly – my flight may or may not have involved soaring the drone several feet in to the air and then, in a panic, cutting the motor and watching it hit the floor.)

Drone Focus Conference 2016 is already in the works, Tehven announced at the event. It will be held on June 1, 2016, and the main keynote already confirmed is Lisa Ellman, Obama's former law student who is now hailed as “Queen of the Drones” for her efforts in achieving FAA exemptions.

Tehven said that based off this year's success, he hopes to see double the attendance next year as well as continued drive to bolster the UAS industry in North Dakota.

“This community rallied together and we made this happen,” he said.

For more coverage on the Drone Focus Conference, check out WDAY and The Fargo Forum.