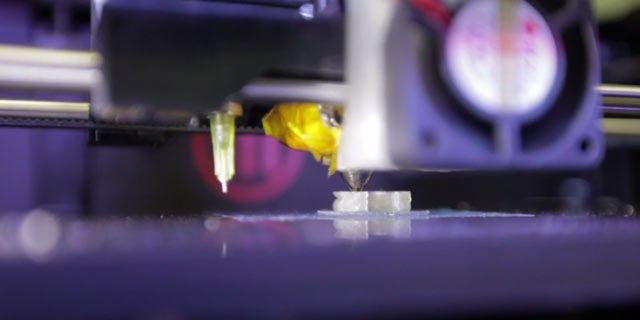 It was recently announced that investigators at The Feinstein Institute for Medical Research have made a medical breakthrough using the MakerBot Replicator 2X Experimental 3D Printer. Specifically they have created cartilage designed for tracheal repair.

The results were reported at the 51st Annual Meeting of the Society of Thoracic Surgeons in San Diego. Todd Goldstein presented the findings, showing the world the first medical research wherein MakerBot PLA Filament was used to 3D print custom tracheal scaffolding; it was combined with living cells to create a real, tracheal segment.

Tissue engineering is like other kinds of engineering, except instead of using steel or computer code to make things engineers use living cells from skin, muscle, or cartilage as raw materials. The Feinstein Institute researchers already know how to make cartilage from a mixture of cells, nutrients to feed them, and collagen.

That’s where the 3D printing comes into play. A 3D printer can construct scaffolding, which can be covered in a mixture of cells and collagen, which then grows into cartilage.

“Making a windpipe or trachea is uncharted territory,” says Todd Goldstein, presenter of the research. “It has to be rigid enough to withstand coughs, sneezes and other shifts in pressure, yet flexible enough to allow the neck to move freely.”

The Feinstein Institute had looked previously at other 3D printers that can extrude living cells, but the options were few and expensive. A single special bio printer costs around $180,000, an amount that the Institute would not allocate, so they decided to use the more affordable and accessible MakerBot that retails for $2,499 and fits on a desktop.

“The research being done at the Feinstein Institute is exciting and promising,” noted Jenny Lawton, CEO of MakerBot. “We are continually amazed by what is being created with 3D Printers. To know that a MakerBot Replicator 3D Printer played a role in a potential medical breakthrough is inspiring.”

MakerBot has also supplied the Feinstein Institute with early samples of its just-announced MakerBot PLA Composite Filaments in Limestone (calcium carbonate) and Iron, which will be available commercially later this year. That will allow them to start investigating how to engineer other kinds of tissue, like bone, or 3D print custom-made shields for cancer and radiation treatment.

“Do you remember the Six Million Dollar Man?” asks Goldstein. “The Bionic Man is not the future, it’s the present. We have that ability to do that now.”