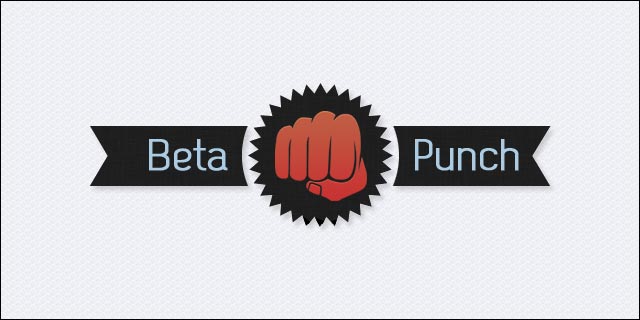 Is your beta so quiet you can hear the crickets chirping? Or is that just the sound of your mom and dad clicking around?

If you need to stir up some activity, consider trying BetaPunch. BetaPunch connects startups with beta testers, who can record their screens and get paid to play. They’ve attracted almost 500 beta testers and around 150 startups, including Crowdtilt, ER Advisor, and SimpleTix.

Compared to alternatives like BetaBait and StartUpLift, BetaPunch focuses on creating a community. For example, startups can rate beta testers and beta testera can boost their reputation on the site.

According to founder Ross Nochumowitz, beta testing can be tricky. “The biggest mistake that startups make while beta testing is asking the wrong people for feedback for their startup. Often times startup founders want to show their family or friends their next big idea, and no matter what it is ,they are going to tell you they like it.”

Another mistake is not finding testers as soon as possible: “Too many startups are collecting emails (via a Launchrock page) for 3, 4, 5, or even 6 months and by that time people lose interest,” he says.

This may be some normal advice, but Nochumowitz is not your typical entrepreneur. By day he works in a family business as a bail bondsman – learning some lessons in the process – and he outsourced his development for BetaPunch as far as South Africa and Pakistan.

“As a manager for my family business I have learned a lot about proper ways to give instructions and facilitate our employees throughout the course of a day. It is no different with my developers. … I use developers from all over the world and am in constant communication with them making sure they stay focused on the task given to them.”

BetaPunch is based in Baltimore and recently showcased at our Tech Cocktail Baltimore mixer.