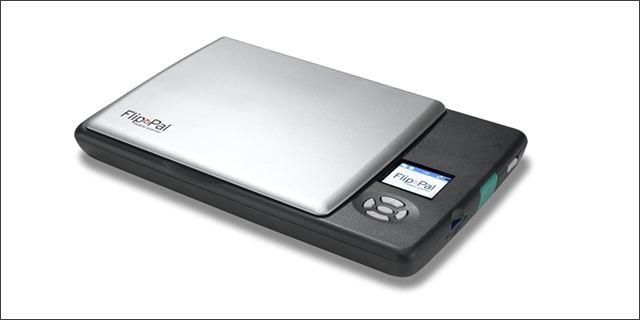 Most of the 110 million households in the United States have photos, documents, personal records, coins, medals, fabric, art, and other keepsakes scattered in boxes, drawers, photo albums, and remote locations.  These items are left disorganized, aging, and unprotected from the elements and unfortunately do not have digital backups.

Gordon Nuttall encountered this exact situation when he went to put a DVD together for his wife’s parents, who were celebrating their 50th wedding anniversary. The traditional flatbed scanner was not cutting it for various reasons: it took forever, it had no mobility, and there was only an 8 x 11 space to put anything.

“A lot of the photos were stuck under a yellowed plastic sheet,” explains Nuttall. “We damaged a couple of them in the process, much to the worry of her mom.”

Nine months later, Nuttall had established his company, Couragent, and released the new Flip-Pal mobile scanner to the world. Now there is no document is too big, no item too obscure, and no location out of reach for people who need to scan.

A lot of people might scoff at this idea and wonder why they would not just take pictures with their phones or digital cameras instead. The answer, to Nuttall, is that none of the current digital solutions are any match for the power, resolution, and prowess of a scanner.

However, it all comes back to the diagnosis and treatment of a symptom related to current scanning technology: size and portability. You can have the most powerful scanner in the world, but it probably will not fit in your backpack; Flip-Pal can.

The compact design requires absolutely no peripheral computer attachment to work because it is completely battery operated with SD memory features. If the item is too big for Flip-Pal's scanning surface, the built in EasyStitch software quickly and automatically reassembles multiple scans into their larger original.

The device is well planned out, but so is Nuttall’s effort to go after a major market that needs a solution like this. He has been able to establish multiple domestic and international selling partners as well as a successful marketing campaign: targeted emails at specific niche groups, attending events and shows, blasting social media, and employing thought leaders in specific verticals.

The scrapbooking, genealogy, family history, and photo organizing crowds fall in the age range of 25 to 70, according to his data, and they are loving what the Flip-Pal brings to the table.

“Every life is a story worth sharing and safeguarding,” says Nuttall. “Do not let your precious photos, documents, genealogy records, and other memorabilia remain scattered, lost or hidden.”