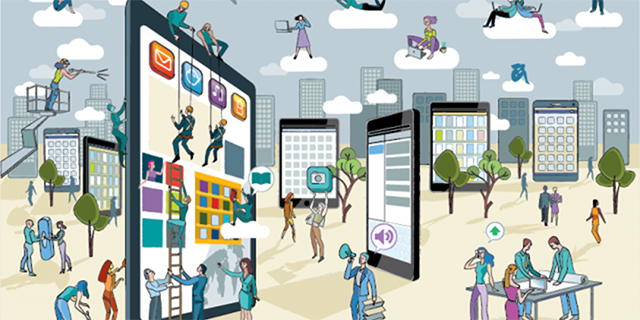 Frank Sinatra called it “the city that never sleeps”. It seems fitting that the inhabitants will enjoy the best-performing city-wide publicly available WiFi on Earth, 24 hours a day, 7 days a week. Such are the claims proudly made by Mayor Bill de Blasio. The 6,400 coin-operated pay phones will be replaced and augmented by 10,000 WiFi “pillars”, designed to provide 24/7 free Internet access with speeds up to 1Gbps. To put things into perspective, that’s fast enough to allow someone to download a high-definition movie in about 30 seconds.

Among corporate providers offering WiFi to its customers, Starbucks is currently the fastest. Still, it’s less than 10 Mbps. That’s quite a difference, and speaks to the unprecedented ambition of this project.

The plan is to place 10,000 pillars throughout the five boroughs of New York City, with 500 to be operational by year’s end. Anyone with objections to city expenditures (of any kind) will be hard-pressed to find an argument in this case, since the project is funded by advertisers. And according to the Mayor’s number crunchers, that revenue will do more than just fund the project. They're forecasting a surplus, with $500 million in total revenue over the next 12 years.

According to the city’s website we can expect the key features to include:

The City of New York is proudly touting their project as a game changer. The Mayor’s staff is certainly confident, emboldened, and not looking back. “For anyone nostalgic for a hand-held pay phone, three existing units will be kept in place on the Upper West Side. As for the others, the city is hoping to auction them off to earn a little more revenue.” － Maya Wiley, counsel to Mr. de Blasio

Having considered the level of detail with which this plan was created, there doesn’t seem to be much on the downside. The feasibility of the technology, the rules for franchise and concessions, and the capability of the players involved make it quite viable. However, that isn’t to say that the plan is free of shortcomings or potential problems.

Now for the Downside

When it comes to ambitious city planning one could borrow a quote, that “The best-laid plans of mice and men often go awry”. Ordinarily, we could rely on lessons learned from past experiences, but modern projects in urban networking infrastructures which include WiFi and “smart cities” are so innovative, we have little precedent to draw from.

In the case of LinkNYC, the biggest problem to its critics is that, those who could potentially benefit the most will benefit the least. Specifically, the speeds being touted by the Mayor’s office will not be the speeds experienced by those in poorer neighborhoods. Pillars in residential neighborhoods will be slimmer, with less capability, and no screens.

Irrespective of location and access, we can’t ignore some of the technical challenges that may affect all locations. For example, they are yet to be physically tested by New York City’s vandals and hackers. What will be the cost of protecting pillars or replacing damaged parts? Although we can be confident that the systems themselves can be rock solid, will the users be vulnerable to attacks on their own devices while accessing the network?

And as with all WiFi networks, we should remind ourselves that one of the critical variables to its performance is the the number of people accessing a network at any given moment. As for revenue, it’s also based largely on forecasts. Although it’s a calculated risk, it’s still a risk nonetheless.

Thinking Outside the Box

This kind of public access opens the door to a number of exciting and innovative opportunities for advertisers.  With the predicted levels of digital traffic on these networks, the pillars could easily develop into modern-day salons for exchange of ideas, as well as sandboxes for advertisers and tech geeks.

Should we expect to see these pillars used for experimental applications in Big Data, the Internet of Things,  and e-commerce?  Could you imagine a world where New York hot dogs are sold using QR codes?

We can probably expect to see new conversations about internet privacy and information security for the lower-to-middle class arise in response to the implementation of these pillars.

All things considered, it’s a step in the right direction. No doubt, other cities will follow. The success of NYC will affect, the speed at which other cities embrace similar plans.