On Wednesday, Google released a diversity report that highlighted data on its own global workforce. And, surprisingly enough, even for one of the tech industry's most progressive companies, Google's numbers show that the world of tech is still very much dominated by white men. 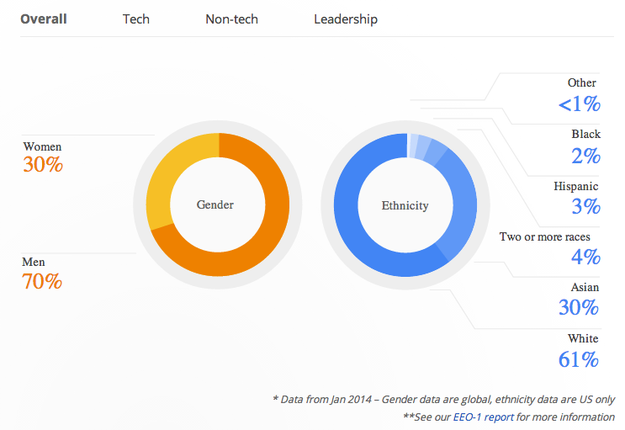 The data reveals that Asians represent the second largest ethnicity among Google's U.S. workforce. (via Google) 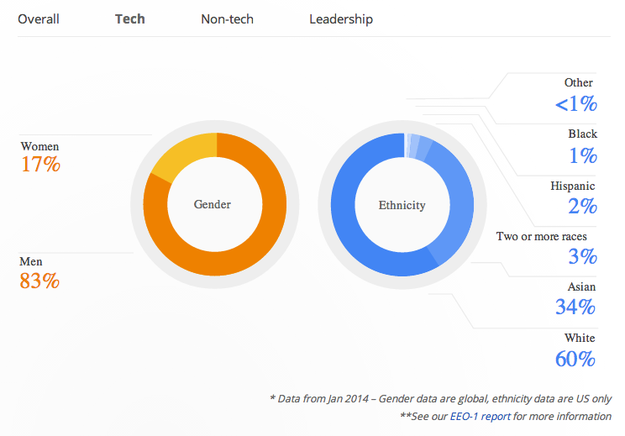 Despite its global presence, only 17 percent of the company's global workforce are women in technical positions. (via Google)

The presence of women in tech and how to increase their numbers has been an ongoing debate, but has picked up in the past two or three years as tech startups have gained a greater role in the American economic and social discussion. Along with this rising popularity and interest in the tech sector, articles and reports have increasingly highlighted this issue of tech's “bro culture” (that those in tech are comprised predominantly of white programmers) and how representation within the industry doesn't reflect the demographics of the United States.

The release of numbers by Google is actually a rarity. Writing for The Wall Street Journal earlier in January, Vivek Wadhwa pointed out that tech companies rarely (if ever) release numbers on their diversity data because of staggeringly low the numbers are for women in engineering/technical roles. In the same piece, he goes on to highlight the ways through which companies can help increase the number of women in their ranks. Of particular note, he writes that at least one women be represented on the hiring team.

In a November, 2013 Quartz piece on “The Tech Industry's Woman Problem,” data on various companies and their engineering teams showed that for companies with women at the helm, women were strongly represented on the technical side (with companies like The Muse boasting 75 percent women representation on its engineering team). As it stands, the Google report showed that the top of the company is even less diverse – nearly 80 percent of leadership positions are held by men, and 72 percent of U.S. leadership is white. 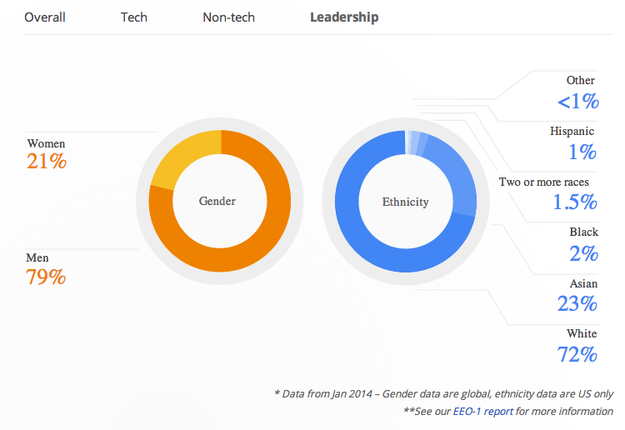 At the top of the company, leadership at Google is even less diverse. (via Google)

“Google is not where we want to be when it comes to diversity, and it’s hard to address these kinds of challenges if you’re not prepared to discuss them openly, and with the facts,” said Google’s senior vice president for people operations, Laszlo Bock, in a blog post. In it, Bock goes into why Google hasn't yet achieved the diversity numbers it's looking for, citing such things as the “pipeline problem” and what Google is doing to increase that diversity. Most importantly, the report states that the goal of releasing such data is to encourage conversation about how to improve diversity in tech.