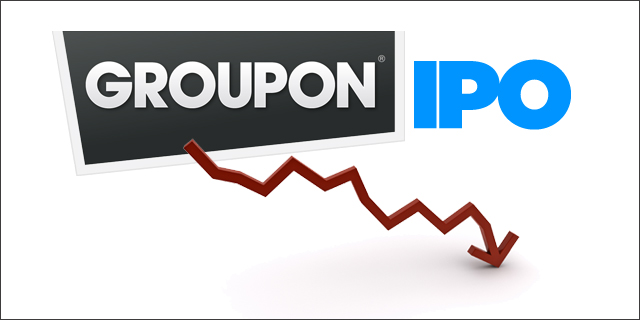 Groupon’s initial public offering may value the daily deal site at less than $12 billion, after once aiming for as much as $25 billion, the Wall Street Journal reports. The IPO could happen in the next two weeks, with less than 10 percent of the company selling for $500 to $700 million.

Groupon initially filed for an IPO in June for $750 million. Its IPO roadshow, delayed in September, may start early next week.

The discount can be traced back to this summer’s equity market volatility, as well as concerns unique to Groupon. The company lost two COOs this year, Margo Georgiadis and predecessor Rob Solomon, and media and investors have questioned the long-term potential of its business model.

While gaining revenue and signing up over 100 million subscribers, Groupon reported a net loss of $102.7 million for the second quarter of 2011, after losing $389.6 million in 2010. Contributing to these losses are the cost of marketing and paying its 9,625 employees (as of late June). CEO Andrew Mason addressed such financial concerns in a leaked internal memo in August, during the quiet period before the IPO, but that did little to quell public doubts.

One of the most interested observers in all this is LivingSocial, which trails behind Groupon and was said to be considering an IPO earlier this year. Also watching are Zynga, which filed this summer, and even Facebook, which may seek an IPO in late 2012.