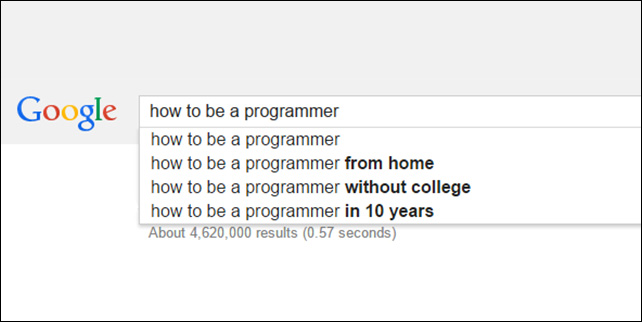 We've heard it over and over and over again: despite the high demand for talent from startups, there's a shortage of qualified software developers and engineers. And, knowing all too well this demand for tech talent, people are increasingly positioning themselves into the field. Programming jobs can be pretty easy to come by, but that's only if you have the actually skills to fulfill the requirements of the job (namely: you need to be good at programming…obviously).

From those with no previous experience in programming, to those who are desirous of adding more programming languages to their portfolios, there has never been a better time to delve into software development. Outside of traditional education and pursuing a degree in computer science, the Internet is replete with resources that can give you a headstart on your path to becoming a developer. Sometimes, though, even a computer science degree may not be enough for you to qualify for a programming job. Nobody knows this better than an Internet blogger known simply as “Okepi” whose post “How to Become a Programmer, Or the Art of Googling Well” has recently been making rounds due to his (or her) unconventional path to getting a programming job at Google.

“At a liberal arts college, being a computer science major does not mean you are a ‘hacker'. It can mean something as simple as, you were shopping around different departments, saw a command line for the first time in an intro level CS class, and decided you liked it enough to stick with it,” says Okepi in the blog post. “But I’d never even heard of the words front-end developer or full-stack. What was Heroku? Never heard of Xcode. Wasn’t git just the thing you used to make sure your partner had access to the code you’d written? Frameworks? Didn’t you just need HTML and Javascript? What the hell was an API?!”

According to the blogger, despite his having pursued at computer science degree in college, he really wasn't at all prepared for a career in programming – it simply wasn't what the program at his college was designed for; rather, the blogger notes that pursuing computer science at his college prepared him for research as opposed to actual development – more theory as opposed to application. In his post, he despairs at his own incompetence, envious of those who actually went to technical schools or whose computer science programs actually trained them to move into software development.

“Mid-September my senior year, that all began to change. I somehow became a friend of one of them, and it was all I needed to learn…He was the very picture of the competent hacker I held in my head, that I nursed a secret crush for. But most extraordinary, he threw something together using tools that he’d never used before. Yes, he did spend more time on Google than he did coding, but through sheer force of Googling and a prior, general picture knowledge of how these things worked, he’d roped together a pretty sophisticated and working app.”

It wasn't until he became friends with someone with actual programming experience that he really pushed himself to learn how to get into development. After attending a hackathon with that friend and creating further connections with other programmers, he began to actively use various free resources on the Web, such as Code Academy. And, when he didn't understand anything, he simply Googled it to learn more about how to do it.

“Something I realized. Just like my code-god compatriot, when I didn’t understand something, all I needed to do…was Google it,” writes the blogger. “After just two weeks of going through random tutorials, people were already beginning to see me as more competent than them. Sure, I was nowhere near the competency of my coder-god friend, but I slowly began to realize that the gap between me and him might be as artificial as the gap between my friends and me.”

He shortly landed himself a internship at custom software engineering company, and in the end found himself with a programming job offer from Google. The blogger notes that, when it comes down to it, anyone can become a programmer, if they're able to put in the effort and actually do what it takes to keep learning…to Google something when we don't understand.

“The barriers to becoming a software engineer are real. People born in technical families, or who were introduced to programming at an early age have this easy confidence that lets them tackle new things, to keep learning — and, in our eyes, they just keep getting further and further ahead. Last year, I saw this gap and gave up. But all we really need is the opportunity to see that it’s not hopeless. It’s not about what we already know, it’s about how we learn. It’s about the tenacity of sitting in front of a computer and Googling until you find the right answer. It’s about staring at every line of code until you understand what’s going on, or Googling until you do. It’s about Googling how-to, examples, errors, until it all begins to make sense. Everything else will follow.”

Read the blog post “How to Become a Programmer, Or the Art of Googling Well” in its entirety.