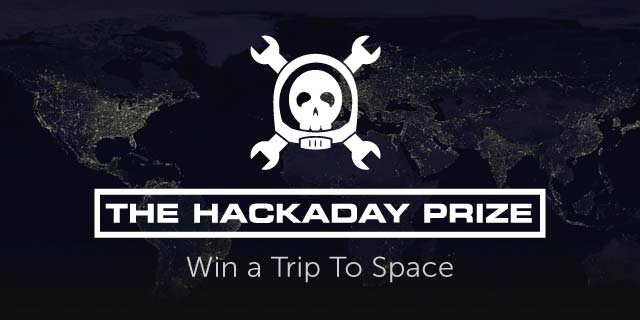 If you're not around the D.C. area and can't make it to our Sessions event with SpaceX's Steve Davis tomorrow, then I guess you'll just have to settle for this space-related news: Get the chance to change the future of humanity and win a trip to space in the process.

“We launched the Hackaday Prize because we want to see the next evolution of hardware happen right now, and we want it to be open,” said Managing Editor of Hackaday.com Mike Szczys in a press release.

Launched just yesterday by SupplyFrame, a company helping engineers design better hardware faster, the Hackaday Prize is a chance for hardware hackers to build a piece of open source hardware that has the potential to change the world. The focus on open source is an essential feature of the competition, as it's through open design that solutions for the future are discovered. In a post written yesterday by Szczys:

“Think big, come up with a piece of hardware that has the potential to change the lives of many. Or just build something silly and fun. But do it at a high level, and share your work…It’s no secret that Hackaday is in favor of Open Design. The benefits of Open Hardware and Open Source software are vast for all of society. Stop banging your head against the same wall that has already been broken down by another engineer who posted the solution for all to see. Learn new skills by reading the code of masters and studying the design files of successful products. But for this to happen, the Openness must grow.”

The grand prize is a trip to space on a carrier of the winner's choice. If space is a little too final frontier for you, then there's also the option of receiving a cash prize of $196,418 (a Fibonacci number…because #nerd). Other prizes include a milling machine, a top-grade 3D printer, a trip to Japan's Akihabara eletronics district, and others.

Preliminary submissions are being accepted now until June 28, 2014 through Hackaday Projects, and welcomes entries from anyone 13 years or older. To learn more, visit the Hackaday Prize website.