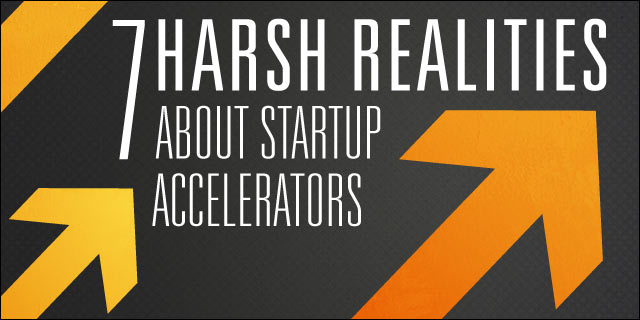 The human imagination is an incredibly buggy piece of software, because it’s very selective. If you’re pondering whether to apply for startup accelerators, you might sit back in your office bean bag chair and think about getting into Y Combinator or Techstars, wooing investors at demo day, and turning into an accelerator legend like Dropbox.

Why yes, you decide, I should definitely apply to an accelerator.

But your buggy imagination failed to mention a few things – like, for example, what happens between getting accepted and demo day. It forgot to imagine how it would feel to be on the bottom of your accelerator cohort, or to argue with mentors, or to have a barely-working prototype for demo day. I’m not saying this will happen to you, but it might.

Accelerators add enormous value to startups, on the whole. But some accelerators don’t, some mentors don’t, and some entrepreneurs just don’t put in enough work to capture that value. If you’re thinking about joining an accelerator, be prepared for these harsh realities:

“YC and Paul Graham don't have all the answers. They can point you in the right direction and away from the wrong paths, but ultimately the founders need to make it happen.”

“Mentors will come in and claim to have an understanding of your business, but the reality is: no one knows more about your business than yourself.”

“Lawyers circled the group like vultures until everyone was incorporated and then they disappeared. Some advisors, including the preferred lawyers, gave very, very bad advice – in one case, flat-out inaccurate advice (regarding the corporate formation, what an S-corp is, etc.).”

“Entrepreneurs start to believe that the accelerator and their staff has the magic bullet of success. The truth is, all concepts/businesses are different. No one person knows all the answers, so it would be a mistake to believe that they will help solve your problems.”

Programs can be disorganized

“Mentors and investors you expect to be at a meeting did not show. The program staff were constantly scrambling to fill speaker spots to make up for the professionals who did not show.”

“The odds of a successful company coming out of an accelerator are 1 in 10. By success, I mean million-dollar business. Also, there's a fair amount of competition between teams to see who will succeed.”

“After graduation, one bad apple ruined our group camaraderie. We don't all meet up as a class and talk anymore because it got too competitive between people. Some of us are still in touch, but we would've all benefited from a feeling of class unity and continued class meetups. It kinda soured the end of the experience. And it's sad that it only took one person/company to do that.”

The schedule is rough

“The program schedule was intense; we basically had no evenings. It wasn't unusual to have a session until 9:30 pm, and another one at 10 am the next morning. Sometimes I'd pitch our product four times in a single day. In many cases, the sessions required advanced preparation if you wanted to make the most of them, and managing this while my company was gaining traction was crazy.”

“You're in the program for 9-12 hours per day for 3 months straight, which can be tough for some people.”

“It's a tremendous amount of work. Accelerators are fairly appropriately named. They are a forcing function that puts the pedal to the metal and that adds a lot of work and stress to the already over-worked and stressful startup day-to-day. It works in the end, though.”

“The worst part of the experience was finding out our entire business model failed. Thankfully, we found out a lot sooner when Paul [Graham] told us to fly back to NY and become real estate brokers for a month! (An interesting story in and of itself…)”

Your fate is in your hands

“You get exactly what you put in. We quit our day jobs at Google and Twitter and gave it 110%, so that when we finished the program we had a product that was pretty much ready for the public.”

The feedback is blunt

“A good accelerator does an excellent job of creating stress as a way to force issues to the surface as fast as possible. They do so by exposing every flaw in your product, business plan, and team. This is both the worst and best part of the accelerator experience. Dealing with these challenges is painful, but at the same time doing so successfully is definitely a validating experience.”