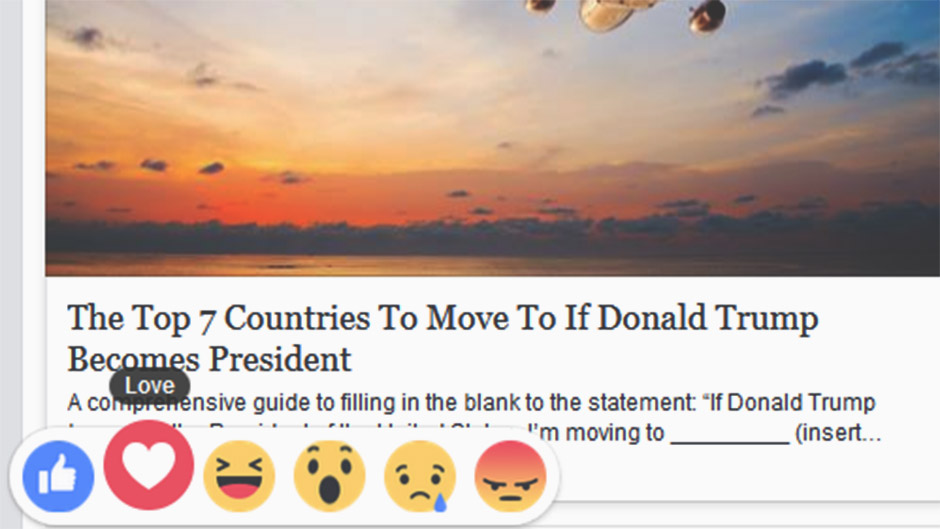 After more than year in development and testing in Spain and Ireland, today Facebook has universally replaced the Like button with Facebook Reactions. Releasing today on on Web, iOS, and Android, Facebook Reactions will expand on the way people can interact with posts and stories on social media platform. For years people have requested everything from a dislike button to ways to properly express their emotions, and now they can choose from six emotions, including the traditional Like option.

“To add a reaction, hold down the Like button on mobile or hover over the Like button on desktop to see the reaction image options, then tap either Like, Love, Haha, Wow, Sad or Angry,” stated Facebook Product Manager Sammi Krug.

According to Facebook’s launch statement on Reactions, the team put a great deal of thought and planning into rolling the new feature out. During their initial tests they included a couple of additional reactions, but through tracking and interviews found that people did not use the Yay or Confused buttons.

“We understand that this is a big change, and want to be thoughtful about rolling this out. For more than a year we have been conducting global research including focus groups and surveys to determine what types of reactions people would want to use most,” stated Krug. “We also looked at how people are already commenting on posts and the top stickers and emoticons as signals for the types of reactions people are already using to determine which reactions to offer.”

For those that manage Facebook Pages, the addition of reactions won’t immediately affect how often posts appear in the newsfeed, but Krug alluded to this being a potential in the future. For now, any use of Reactions will work just as Like Buttons have in the past. The more people interact with page posts, the more likely they will see future posts.

“Our goal with News Feed is to show you the stories that matter most to you. Initially, just as we do when someone likes a post, if someone uses a Reaction, we will infer they want to see more of that type of post. In the beginning, it won’t matter if someone likes, “wows” or “sads” a post — we will initially use any Reaction similar to a Like to infer that you want to see more of that type of content. Over time we hope to learn how the different Reactions should be weighted differently by News Feed to do a better job of showing everyone the stories they most want to see,” stated Krug.

Currently, Facebook Page Insights groups each of these into a Reactions data point. It is unclear if they will be later separated by emotion, but that will likely depending on how Facebook creates a potential weight based on the reaction used.

“Page owners will be able to see Reactions to all of their posts on Page insights. Reactions will have the same impact on ad delivery as likes. We will spend time learning from this rollout and use feedback to improve,” stated Krug.