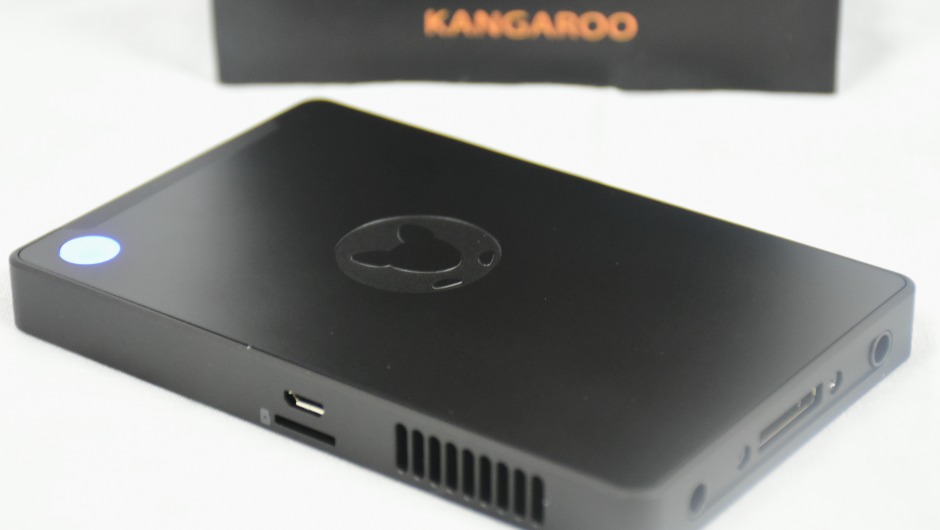 Tablets, laptops, smartphones, PCs, Macs… your refrigerator? The power of computers comes in so many different shapes and sizes now, it’s hard to keep track. Though certainly not new to the market, there has been a bit more innovation and progress in the mini-PC market in the past couple of years compared to years past. And the Kangaroo Pro is the epitome of that innovation.

Intel launched the Compute Stick, Raspberry PI is sort of in the space, Asus has the Chromebit, and Lenovo the IdeaCentre Stick 300. Each of these devices have their own unique qualities, some turning TVs into computers or smart TVs, other’s acting as an extremely affordable Windows 10 desktop computer. For the Kangaroo, it sort of falls outside of each because it one-ups each of these in several ways.

The  Kangaroo Pro is: great for making computing or web surfing, typical office applications, incredibly portable, priced well, and easy to use.

The Kangaroo Pro is not: a media center, designed for gaming, or for high performance applications or software.

If I were to buy a less tech savvy person a computer, this could be a good start, especially for the price point. It would also be a great device for a kid that can’t quite manage a tablet yet and doesn’t need the performance for gaming. For the purpose of this review, we used the Kangaroo over two months, turning it into a distraction free writing environment. To be more specific, making it an incredibly affordable Windows 10 powered version of a Chromebook.

Out of the Box and Setup

The initial setup process is incredibly simple. All you need to do is plug in a keyboard, mouse, and a screen through the VGA or HDMI port. Plug it in, turn it on, and you’ll notice a light start to glow. It’s booting up and will prompt you to setup Windows 10 from the fresh install. Because the Kangaroo has a built in fingerprint reader, part of the process also includes setting up access to your Windows 10 account through that. It will add a small amount of time, but overall it only took about 5-8 minutes in total to get up and running.

After setup, the fresh install will leave you with about 25 GB of free space to work with, which really isn’t too much memory. However, as this is really more so designed for basic computing, you’d be better off using cloud storage in most cases. You can also expand your memory through the built-in Micro SD port or using a USB hard drive.

Unlike the base model Kangaroo ($100), the Kangaroo Pro ($200) includes a dock with ports as far as the eye can see. You want USB? You’ve got three. You want HDMI or VGA ports? There’s both. It also includes an ethernet port, micro USB and micro SD ports.

As far as differentiators, there are a few mini PCs that have some of these ports available, but certainly not to the same count for the same price. It also includes a built-in fingerprint reader and battery, which makes the Kangaroo more unique. The battery also lasts up to about four hours, but this depends on how much computing power it’s using at the time.

As far as the computing power, available memory and other specs, it runs on par to many, but beats the USB PC devices. Due to how Microsoft prices Windows 10, most of the mini PCs stick with 2 GB of system memory to make the device as affordable as possible.

Beyond that, the specs (below) are what limit the Kangaroo Pro to being much more than a basic portable PC for standard office apps and web browsing. It’s a bit sluggish, streaming video is too laggy, and it tends to heat up quickly. However, that does not mean it can’t be used for basic tasks or of course turning your giant TV into a smart TV. Just, you know, don’t plan on streaming Netflix through it.

Kangaroo Pro also won’t replace a regular PC or tablet, but at its price point it is truly at the forefront of entry level computers.

If you typically carry around an iPhone or iPad, this also creates an even more portable option, however it does have a tendency to heat up more while on battery power.

The Kangaroo is aesthetically pleasing, even though it’s not really designed to be seen. You can mount it behind a TV with the dock, create a mini desktop setup using an iPad, or rest it under a monitor without it drawing the eye. It’s small, lightweight, and has a very simple design. WIthout the dock, it’s about the size of an iPhone 6 Plus, with it, it simply doubles in girthiness.

It comes in one color, black on black, featuring a smooth matte finish on the dock and an aluminum body on the computer itself. There is also an indicator light that can double as a keychain holder (though that may not be wise), which glows various colors.

Besides the visual design elements, there are a few design issues. Due to it’s built-in battery, this little thing likes to heat up quickly. There is also no internal fan, which means you will either need a very well ventilated place to put it, a cooling mat, or even a fan nearby it. If you are simply browsing the internet, you shouldn’t have any issues, but anything more you can expect it to get toasty.

Should you buy the Kangaroo Pro? Yes, depending on your needs. If you are looking for basic computing power at a great price point, the Kangaroo Pro is absolutely the mini PC to buy. If you need a bit more juice, such as using a photo editor, wanting to stream videos, or play games, you’ll still have to look for something with both higher processing power and internal system memory.

Where to buy: Infocus, Amazon, Newegg