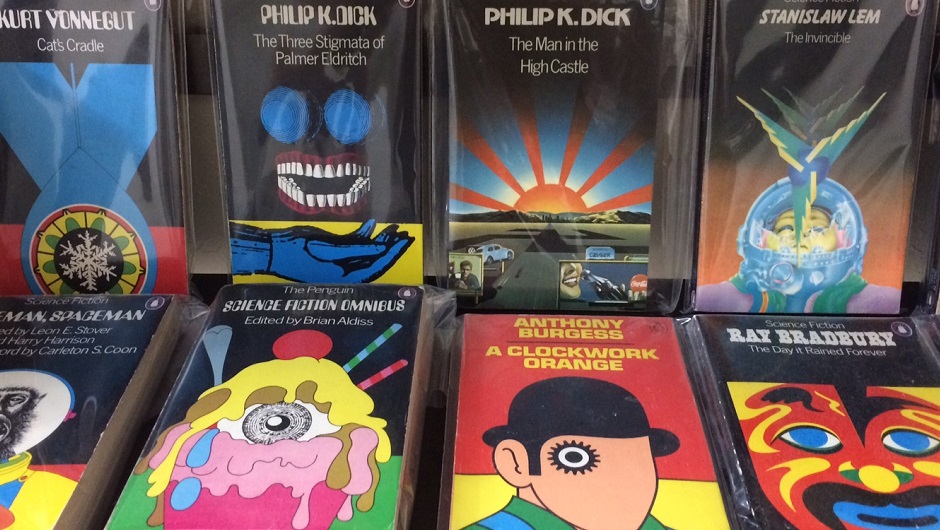 When Adam Axler, the bookseller behind the Instagram account Collectible Science Fiction, first joined the service, his profile picture was David Pelham's 1973 cover to science fiction master Philip K. Dick's The Three Stigmata of Palmer Eldritch. It's an evocative work featuring a surreal image of two eye-like globes hovering above a rictus grin. It's also an acknowledgement of the Philip K. Dick obsession that started Adam on the path to becoming a social media-powered book dealer.

Adam was just a collector at first, selling doubles from his collection to pay for new additions. He began to enjoy the minutiae of book dealing — how to grade books, how to find rare ones, tracking down old editions simply for their cover art — and started a Facebook page. Then, in September of 2016, his wife suggested a better social platform.

“It wasn't until I started using Instagram as my primary selling page that a full-time store became a reality,” Adam says. “The response to my posts was so positive that it encouraged me to keep a larger inventory and run bigger sales. The appeal of not only the rarity of the books, but the pre-digital hand-painted cover art, has created a fiercely loyal following.” 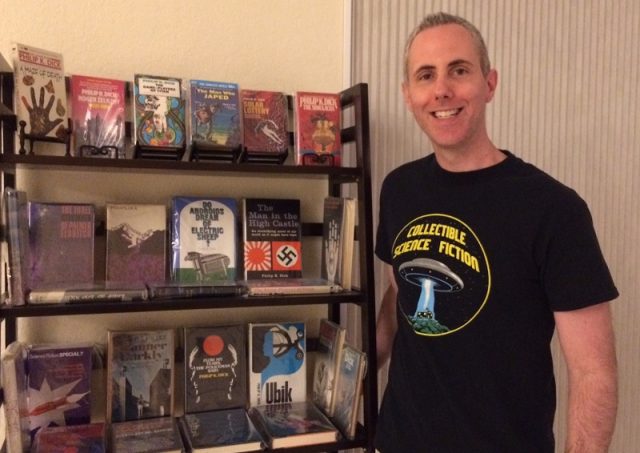 Adam and a few books from his collection.

Unlike competitors Facebook or Twitter, Instagram is explicitly built for one thing: Sharing images. A visual niche like vintage book covers can do well on the service. The business world loves it too — 59 percent of Instagram's users fall into the coveted 18-29-year-old demographic, and one 2017 study found it to be “the fastest growing social media platform” among Inc. 500 businesses.

Instagram also beats other common book-selling sites, as another book dealer, Kevin of Rare Book Sleuth, explains: “If I sell on other sites, like eBay and Amazon, they take a cut of roughly 8 percent and 14 percent, respectively. But with Instagram, I was able to cut out the middleman.”

Adam offers images of three or four books for sale each day, allowing his followers to message him with their bid. He has posted over 2,800 images to more than 5,800 followers.

“What was a nice hobby has turned into an online bookstore open 24/7, allowing me to spend more time with my family and to cut back on long hours as a Physician Assistant,” Adam explains. “Collectible Science Fiction is always open and I often get 3 a.m. messages from my West Coasters or even later from my SF-loving Australians and European customers. It's been an amazing transformation from selling a few extra books to trying to stay weeks or months ahead of inventory while getting orders shipped every day.”

Collectible Science Fiction is now a member of Instagram's ecosystem of book dealers, each with their own specialty, from Kevin's rare books to the horror-focused PG Bloodhouse account.

Book dealing holds to an essential rule: Be honest. A book dealer's audience needs to know the condition of a book, whether they're hoping for a well-preserved edition or they just want a physical object and the tangible nostalgia it represents, wrinkles be damned.

“Some of my customers just want nice, readable copies that won't fall apart when split open, but collectors like myself want to know if there are stamps, a creased spine, or hidden nameplates,” Adam says. “When I post a book for sale, I not only try to show clear images but to give details about the edition as well, such as first paperback or cover art by Frank Frazetta.”

He also recommends sellers explore other corners of Instagram's book dealing community, following and patronizing other accounts in order to fully understand the niche.

Science fiction and retro throwbacks are popular trends at the moment, as seen in TV hits like Stranger Things and Black Mirror, or blockbuster IP like Stephen King's It and Bladerunner. That cultural cachet isn't lost on Adam's genre-focused shop.

“During the Blade Runner 2049 craze, I sold a first UK edition of Do Androids Dream of Electric Sheep for over $1,000. Thank you, Ridley Scott and Denis Villeneuve!” he tells me, though he's quick to add that the goal of his store is to make collecting affordable, and most of his sales are $10 or less each.

Not all of the benefits of an Instagram sci-fi bookstore are financial, however: Adam has been interviewed for a Vice China article on science fiction cover art and was even recently approached by a TV production company about doing an American Pickers-style show for science fiction and fantasy collectors.

But the best success story Adam has to share? Instagram has connected him to “an entire world of collectors and artists.” Mid-century sci-fi publishers often failed to credit their cover artists, but that lack of respect won't do on Instagram in 2018.

“Through my page and my interest in getting proper credit for their work, I've been in contact with some of the Golden Age of SF artists such as Tony Roberts, Colin Hay, Josh Kirby (his family), Joe Petagno, and many more,” Adam says.

“I asked Rodney Matthews (famous for both his fantasy art and incredible Heavy Metal album covers) if I could use some of his art via DM, and he wrote back immediately, ‘Feel free to share away.' One of my followers and customers, recent Grammy nominated comic art legend Benjamin Marra, is always pleasant and willing to share his thoughts on illustration art.”

Instagram's lack of hyperlinks and surplus of calming sunsets has led many to claim it as the nicest social network. It certaintly offers a reprieve from a frenzied news cycle, and anyone who spends enough time on the platform will discover corners of Instagram dedicated to niches like vintage sci-fi novels.

Adam never thought other dealers would start buying from him, but they support Collectible Science Fiction just as he in turn buys from them.

“It's a great way for dealers to see what others are selling, how they grade their books, and which authors might be trending,” Adam says. Customers have sent him their own novels to review or just as gifts and, just recently, he has sent orders to locals as far-flung as Singapore, Indonesia, Lithuania, and the Czech Republic. As Adam sums it up, “Instagram has opened up the entire world for me.”

Read more about Instagram ads, bots, and influencers on TechCo