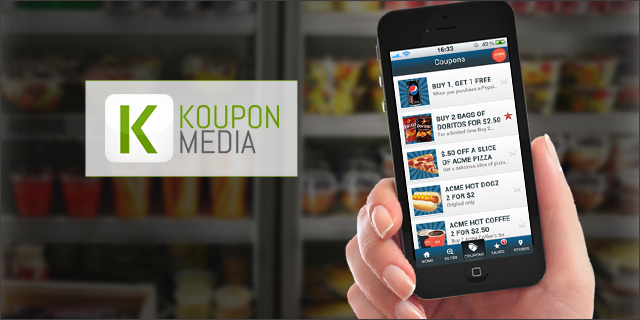 I'm not big on coupons, but occasionally I want and try to save a few bucks on my purchases. The issue I encounter – which I'm sure others have, as well – is that some retailers still rely on paper coupons, which I have neither the time for, nor interest in, finding and clipping. If you've seen an episode of Extreme Couponing, you know that people literally dedicate hours collecting coupons; like, honestly, ain't nobody got time for that. Luckily for us, Koupon Media is taking advantage of a societal shift toward all things digital, creating a Digital Campaign Management (DCM) platform that allows retailers to provide digital offers through mobile technology.

In 2012, 44 percent of the US Internet population owned a smartphone, with over two-thirds reporting that they “cannot live without” them. For TJ Person and Scott Hutchinson, the cofounders of Koupon Media, these statistics are exciting, particularly for two people with nearly 30 years of combined experience working with mobile. The two first met while working for Samsung in the late 90's and, again, at Mango Mobile, where they first took advantage of mobile marketing campaigns.

With an eye on American consumer behavior and an acknowledgment of the prevailing movement toward mobile experiences, Koupon Media hopes many more retailers will take advantage of its DCM platform. “Koupon Media is focused on providing retailers…with tools to deploy, manage, track, and run digital offers through multiple marketing channels,” says Person.

The first coupons were offered by Coca-Cola in 1887. What initially came in the form of paper cut-outs (and continues on, in that form, today) has now moved into the digital realm. While the US saw a 17 percent decline in coupon use between 2011 and 2012, digital coupon use saw a 4.9 percent growth in 2012, with an estimated 92.5 million users redeeming digital coupons in the US.

This is on top of data showing that consumers are devoting more time to their mobile devices (with 55 percent having made purchases from mobile tablets and 28 percent from mobile phones) and more money ($25 billion in Europe and the US). “We created Koupon Media to help retailers and brands deliver one-time-use, mobile coupons to customers – who love their mobile phone and want to use it for more than just phone calls and texts,” remarks Person.

Digital couponing has clearly intensified in recent years. Most recently, digital coupon site, RetailMeNot, filed for a $230 million IPO. But while competitors like RetailMeNot only offer coupons through their own web and mobile platforms, Koupon Media allows brands and retailers to easily create and provide their digital offers using their DCM platform. “Shoppers trust offers that come directly from retailers and brands, and they are more likely to engage with their favorite brands and stores. By providing a direct-to-consumer offering [from brands/retailers themselves], we enable retailers and brands to be center stage to use their brands well, and build loyalty directly.”