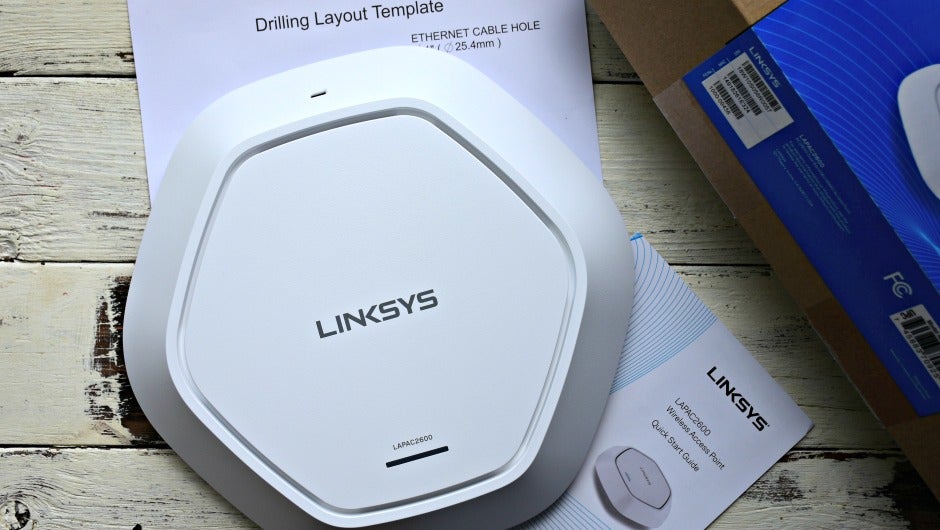 For the past five years or so wireless N or 802.11n has been the standard for internet networks. In a world of Google Fiber, FiOS, and other providers jumping into the fiber optic game internet speeds in the US are finally catching up to some of the fastest in other parts of the world.

As internet speeds increase, networks and hardware will eventually meet their thresholds, which is where wireless AC or 802.11ac picks up. For wireless N, its threshold maxes out at about 450Mbps, but AC can handle up to 1300 Mbps. For typical consumers, there is little need to identify hardware that can support these kinds of speeds as business class internet is not only pricey, but outside the reach of many homes in the US.

However, for those looking to pair their business class internet with a business class hardware solution, the Linksys LAPAC2600 can handle your workload. Like the Linksys Max-Stream MU-MIMO we reviewed earlier in the year, this particular router or access point is all about future proofing paired with some of the best internet speeds available for small to mid-sized businesses. The LAPAC2600 also includes the MU-MIMO feature set.

Though we did thoroughly test the functionality of the LAPAC2600, we didn’t have access to anything like Google Fiber to really push it to its limit. Over the course of a few weeks we checked uptime, outages, connectivity through walls/barriers, and general speed tests within the limits of the internet speeds available. 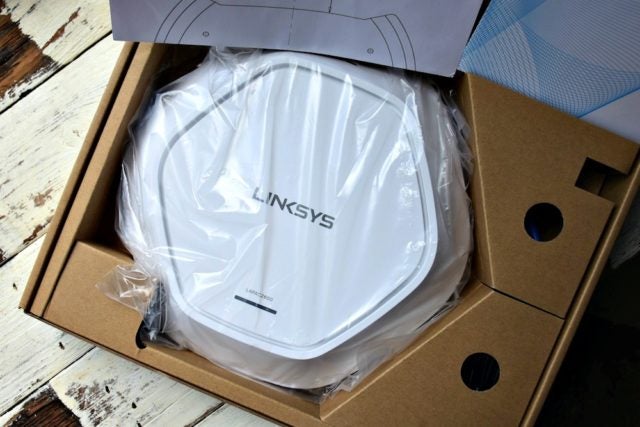 Router setup has always been the bane of my existence, fortunately the process for most brands is getting easier. This particular access point setup process is straight-forward, and if you have a Linksys Smart WiFi account already it’s even easier.

The LAPAC2600 does require a bit more handy work as they are designed to be mounted upside down and in a central location to where you want WIFI coverage. Using the included drilling layout guide and a few drilled holes, your base will be installed in minutes.Then it’s just a matter of connecting the access point to the detachable holder, plugging it in, and following the step-by-step guide. Due to the hardware installation, the setup process took a bit longer at about 15 minutes. Overall, it was painless though.

For an added bonus you can also easily setup different networks and guest networks by way of the Captive Portal. The LAPAC2600 also supports clustering, which means if there are multiple access points users will stay on the same network.

As mentioned earlier, it’s also relatively easy to setup secure guest networks as well through the captive portal. Beyond security, where the LAPAC2600 really shines is by way of its support of MU-MIMO, which allows the network to better distribute (either through manual rules or automation), and keeping everyone in the office connected. This particular unit is designed for offices with up to 100 people, which means a lot of connected devices all accessing the same router.

As far as speed goes, the LAPAC2600 can handle whatever you throw at it. It features 4×4 dual-band AC connectivity that operates at a rate of 2.4 and 5 GHz, with a max delivery of 2.53 Gbps (1,733 Mbps speed with 5Ghz) to several devices simultaneously. You’ll no longer have to worry about your colleagues streaming the Olympics while you jam out to Spotify, all while downloading your client’s database. It also features two Gigabit Ethernet ports, and the ability to be used as a management platform for 16 access points at the same time.

Though we did conduct several speed tests, similar in nature to the Max-Stream review, we feel that it simply could not do the LAPAC2600 justice. Instead, we tested its reliability, supposed ability to better connect through walls and barriers, and connect as many devices as possible to see if the quality of streaming would degrade.

Using the Linksys Max-Stream AC600 Dual-Band MU-MIMO USB Adapter on two Windows based computers, two Mac laptops, a smart TV, two security camera systems, a WiFi-connected coffee maker, and a PS4 we found little to no noticeable effects on the network. Though each were connected, only Netflix was being streamed on one unit, Pandora on a computer, YouTube on a computer, and the rest in standby but connected modes.

This test was also not conducted on business grade internet, which is even more promising for the uptime and quality of connections when paired with superior internet speeds. As far as speed tests go, each time we put the LAPAC2600 through fast.com and speedtest.net the connection maxed out (95-100 Mbps).

For the nitty gritty specs, check out the details here.

Like most routers and access points, they are by design not the prettiest things on the planet. Unlike many others though, the LAPAC2600 does not have a external antennas, making it a bit easier for it to blend into typical office environments. Another benefit to the power over ethernet feature is that you also have one less plug to deal with. Besides drilling into your ceiling, it’s also incredibly easy to mount.

Should you buy the Linksys LAPAC2600 Business AC1200 Dual-Band Access Point? Yes, if you are a small- to medium-sized office with business class internet.

As noted throughout the review, speed alone is not what sets wireless AC apart. Even if using the 5ghz option, which is typically not a big fan of walls or other barriers, wireless AC’s larger wavelengths also allow you to retain a consistent speed further from the actual access point. The LAPAC2600 is also priced well for a business-class solution, which is even more appealing to smaller businesses. Typical enterprise solutions cost around $1000, granted with greater range capacity, but this provides the ideal hardware at the right price.

Where to buy: Linksys

One side-effect of future proofing your business and squeezing out the most speed possible is that your existing devices likely won’t support the latest tech. Alongside the LAPAC2600 is the AC600 Dual-Band MU-MIMO USB adapter. It’s a USB 2.0 supported adapater that allows your existing PCs to soak in all of those sweet sweet wireless AC network speeds and benefits.

We tested the AC600 USB Adapter on both the Kangaroo Pro and also an incredibly old Windows PC.

Like most USB wireless adapters, the Linksys AC600 takes as much time to get it out of the box as it does setting it up and installing. As soon as you plug the adapter into the USB port the drivers will kick in and install, quickly allowing you to connect to the internet. For those that run into issues, likely on older machines, the included CD will cover the driver installation as well. In all, it took less than a minute to setup.

If you have older Windows powered computers that don’t support 802.11ac or even 802.11n, this is an affordable solution to get the most out of your network. It’s priced competitively to others that are out there, and does the job as intended. If you have a mac, unfortunately you’ll be out of luck as the AC600 USB Adapter does not support them.

Where to buy: Linksys, Amazon