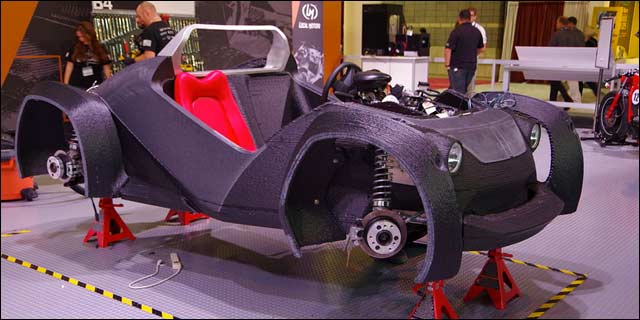 After some initial buzz in June, Local Motors has officially completed – or should I say printed – the world's first 3D printed, drivable vehicle. The Strati, as it's been named, was built by Local Motors alongside Cincinnati Incorporated, Oak Ridge National Laboratory, and The Association for Manufacturing Technology.

The car was built in three phases:

Then, the key was put into the ignition, the car was turned on, and it took a victory lap around McCormick Place. Local Motors CEO John B Rogers Jr. took the wheel as the car set off on its maiden voyage, driving off into the annals of history.

It's important to bring this back around to the ethos of being an entrepreneur and starting up. This moment in time was not made possible only by Local Motors, but rather the collaboration of multiple groups and industry experts. SABIC Innovative Plastics provided the carbon-reinforced plastic used to 3D print first iterations of The Strati, Renault donated the powertrain from the Twizy, Siemens sent in the Solid Edge software for the structural design elements, and Fifteen 52 built custom wheels to match the design.

“At Local Motors, we are changing the way people move,” says Rogers. “Using 3D printing, we have reimagined how cars are created using modern manufacturing techniques. The results are astounding. We have reduced the amount of car parts from 25,000 to less than 50, proving that we can take a car from designed to driven in less than six months. That is the game changer in the automotive world.”