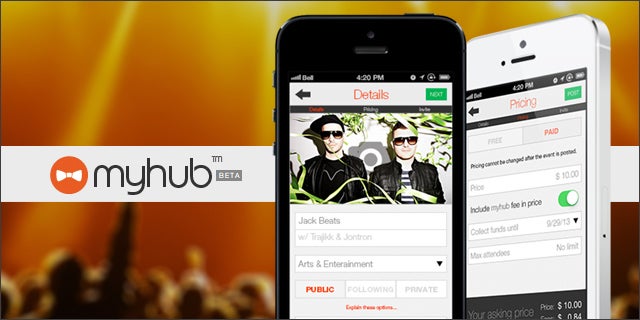 Eric Hubbell, CEO and founder of myhub, knew the path ahead of him would not be easy when transitioning from the golf industry into the world of tech startups. Nevertheless, he left his secure job with KBS Golf Shafts behind and made the big leap.

About 5 years ago, Hubbell moved from Vermont to Colorado and found himself swamped with fun activities to take part in with his friends. As popular as he was, though, connecting everybody together was often frustrating and time-consuming.

The group had created their own social web calendar, but nobody ever seemed to act on it. Ideas would get put on the back burner because nobody could effectively coordinate or raise the money necessary to make it happen.

Instead of giving up, Hubbell’s entrepreneurial spirit emerged and showed him an opportunity to create a powerful group event planning service while improving a part of the web that he had long seen as underdeveloped. The green was far away, but his tee shot was solidly hit down the fairway – before rolling into a bunker.

The initial design of myhub was tough, to say the least. A lot of the APIs that Hubbell was working with were pretty green, and recruiting the proper team was easier said than done. But as many golfers do, Hubbell understood the dependent relationship between patience and success. He focused his efforts, hit out of the sand, and landed on the green.

Slowly, the myhub team was selected based on how well they outperformed the sum of their parts, and a final product was finally ready for release. But then iOS7 dropped and myhub found itself outdated almost overnight. When he approached his ball, he realized the hole was much further away than he initially thought.

Instead of making a hasty two-putt for par, Hubbell called the release back, took his entire team back to the design and feature development phase, and flattened everything. Re-examining how myhub fit into iOS7 was a strategic move that led the team to add multiple features, like a payment model, to enhance the overall user experience. He sized up his shot and sunk a birdie instead of par.

Use myhub to create events, send invites, and collect funds all in one place. By blending together elements from social networks, professional event planning sites, and peer-to-peer payment platforms, Hubbell is working to capture everyday group planning.

Throw a happy hour to unite your fantasy football league on Sundays. Set up kickball games that people will show up to on time. Rent that beach house with your good buddies, and collect payment before making the commitment. It's all possible through myhub.

“We built myhub for the generations that grew up with the advent of social media,” says Hubbell. “They are socially active, many have disposable income, and on average they love doing fun things. We will make them love organizing events.”