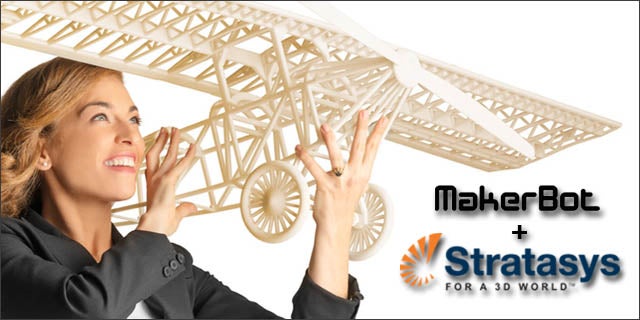 Yesterday, 3D printing startup MakerBot announced that it had been acquired by Stratasys in a transaction valued at $403 million.

Founded in 2009, MakerBot has sold over 22,000 3D printers and established itself as the friendly face of 3D printing for consumers. Stratasys, on the other hand, is one of the giant corporations who founded the whole industry – with over 1,100 employees and 500 patents. In 1989, the Stratasys cofounders invented “fused deposition modeling,” a technique used by many 3D printers today. They offer both desktop and non-desktop models.

MakerBot will continue to operate as a separate entity with its own brand, products, and strategy. And cofounder Bre Pettis will remain CEO.

“We have an aggressive model for growth, and partnering with Stratasys will allow us to supercharge our mission to empower individuals to make things using a MakerBot, and allow us to bring 3D technology to more people,” says Pettis.

By partnering with Stratasys, MakerBot gains access to its global network and its expertise in fused deposition modeling. Stratasys, on the other hand, gets a more consumer-friendly desktop 3D printing line.

The transaction will be paid in Stratasys shares worth $403 million, and it’s expected to be completed in the third quarter of 2013.

Check out our interview with MakerBot CEO Bre Pettis from SXSW 2013.