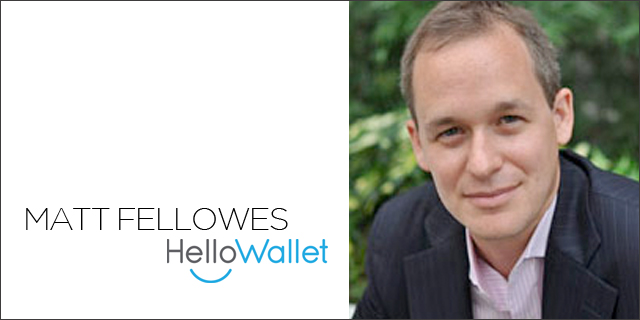 Independence – freedom from the control, influence, support, aid, or the like, of others.

Independent financial advice – for the last 50 years, only 15% of Americans had access to it.

Even with arrival of personal financial software in the 1980’s and '90’s, the percentage didn’t change. Most Americans were on their own in regards to managing day to day finances and saving for retirement – and failing miserably.

This realization is something that Matt Fellowes was acutely aware of through his work as a consumer finance scholar and fellow at the Brookings Institution.  It is what planted the seeds of the transformational company he launched in 2010: HelloWallet.

HelloWallet has set out to democratize access to financial guidance by offering up independent financial advice via web-based software that goes beyond tracking expenses – for years the crux of most personal financial management software.

The innovative system aims to create behavioral change in regards to spending and saving though personalized guidance.  HelloWallet is not backed by a bank or financial institution, and it almost goes without saying that this type independent advice can clearly lead to a different kind of independence that many Americans need and desire – the freedom of choice in personal financial matters.

We covered HelloWallet’s unique approach to the personal financial management earlier this year, and since then, the company has grown in both revenue and staff. Since May, the company has logged 300,000 individual and corporate memberships that reach over 7 million people. A diverse team which includes neuroscientists, behavior scientists, psychologists and engineers has expanded and will move to larger office space in Washington, DC in 2012.

We had the pleasure of hosting HelloWallet at our DCWEEK Tech Cocktail mixer event as well as the opportunity to interview HelloWallet founder and now chief executive officer Matt Fellowes to discuss his background as a researcher-turned entrepreneur, the company's social mission, as well as his thoughts on the personal financial management software space and HelloWallet’s place in it.

TC: Where and when did you conceive of the idea for HelloWallet?

Matt Fellowes: In my work at the Brookings Institution (which is essentially a think tank), I noticed two phenomena: one, US workers were $6 million behind on retirement savings.  The median balance in most retirement accounts was roughly $40,000, which is a joke. There was something simply not working. Two, most Americans didn’t have access to independent financial advice. Roughly 15-20% of the population since the 1950’s has had this access and that number has remained unchanged, even with the introduction of software like Quicken.  It didn’t expand access; it merely poached customers from financial advisors.

So I started to think, how do you expand financial advice and management to the mass market?

TC: How did you make the leap to entrepreneurism? Is this your first venture?

MF: This is not a typical story, yet there is a natural arc. At Brookings, you are encouraged to think big – we all want to change the world there, and there is no shortage of ambition.  There’s an entrepreneurial spirit, so it was a natural leap.

All of my work there focused around how to use the market to improve social outcomes and produce economic mobility. There is a myth out there that this is the county of dreams. Few people move up the socioeconomic ladder and in reality, people born in the top quartile of income have a 25% chance of moving down into the bottom quartile now more than ever. I was curious on how to change this by incentivizing market players, and then I realized that I could do this myself.

I burned through five business plans before I landed on HelloWallet. I had a luxury of time to think about the idea as well as time to talk to others about it.

Fellowes knew he had a solid idea and decided to pursue it, in spite of a “comfortable” position at Brookings. He was the youngest fellow in history at the institution.

I was passionate about solving this problem through the market rather than through public policy.

TC: Where did you come up with the name for HelloWallet?

MF: [Laughs] This is hotly contested. My wife will tell you she came up with it. We came up with about 50 different names between friends, family and colleagues and tested it relentlessly. We wanted to be deliberate about it. We wanted to transform the market and how to do that is by being a friendly source. Traditionally financial planners are from stodgy, intimidating institutions. We wanted to break the mold in branding and in name.

TC: You launched last year, up against some well-known players in the personal financial management services area. Do you consider them competitors?

MF:  When we launched there were 120 different money management sites out there. We initially thought we had a lot of competition, and then we realized we didn't. We are the only ones trying to change spending behavior. Zillions of sites help people manage money; no one is giving personalize financial guidance on how to help people use their money.

TC: HelloWallet gives one free membership to a family in need for every five paying members. When did the idea for this come about – or was creating a positive social impact always part of your strategy?

MF: In the spirit of trying to democratize guidance we wanted everyone to access to the service; for example, those who are unemployed or those who just can’t afford and independent advisor.  We decided early on that the social mission was an important as the economic one. We thought of many ways to give back, and wanted to build something lasting. If I’m hit by a bus, a new CEO could come in and change the policy.

The free membership for every five commits us over the long run and gives immediately in a meaningful way. We aim to be transparent and aggressive in our marketing of this – since May, we’ve sold 300,000 subscriptions, that has generated 60,000 free memberships we can pass out to community organizations.

TC: Looking forward, what can we expect from HelloWallet in 2012?

MF: We’ll be releasing an iPhone app in a few weeks and an Android app in the first quarter of 2012.

Next year is going to be an exciting year. We’re thinking of ways to be more and more ambitious about helping people to convert their wages into economic mobility. We’re aggressively expanding to become a force in helping people get ahead.