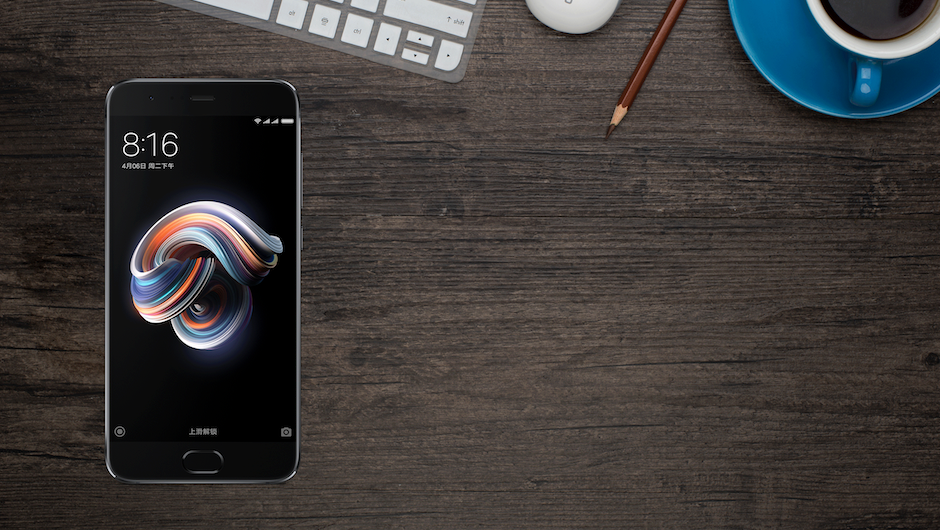 In a world of overpriced smartphones, few mid-tier equivalences gain as much attention outside of OnePlus; however, Xiaomi continues to try breaking that tradition, especially in the US. So last year we checked out a few of their devices, many boasting some intense cameras, simplified software, and a price point that made it a decent option for international travelers (especially to China or India where these are popular). With their latest phone released just last month, we decided to revisit Xiaomi’s offering and tore into the Mi Note 3, which is not to be mistaken with the Redmi Note 3 that came out last year.

Unlike your traditional Android phones in the U.S. or even the OnePlus lineup, Xiaomi uses its own version of the operating system that makes it very cutesy in nature called MIUI. Personally it’s not my thing, but besides the bloatware that come with it, it does not impede or slow the phone down. Fortunately for the rest of us, you can still root your phone and put stock Android on it as well.

So what makes the Mi Note 3 stand out? It’s partially about the software, definitely affordable, features a dual nano sim port, the latest quick charging, and finally a proper water resistance rating of IP67. The biggest change overall though comes down to the AI powered beautification mode, which kicks your selfie game up a notch. In short, it’s ideal for the international traveler or maybe tweens with a selfie addition.

The Mi Note 3 may be the newest phone on the block, but it isn’t the fastest. What was once amongst Xiaomi’s flagship lineup, it’s clear this is designed to be more budget friendly. And with that, you get a lesser processor and GPU. On paper, the Snapdragon 660 may appear to drastically reduce the phone’s abilities, but for the downgrade it’s really only takes about a 10 percent hit. With that said, there are going to be some limitations.

If you’re looking for a high performing smartphone for mobile gaming, the Mi Note 3 is not for you. It can certainly handle the most popular games like Pokémon Go and Clash of Clans, but it just couldn’t handle our typical benchmark games (Asphalt 8). With that said, the stock MIUI version of the phone doesn’t let you tap directly into the Google Play Store, so you’ll have some limitations there anyways. It will however have no issues with streaming high-res videos on YouTube, watching Google Cardboard content, and of course work related apps.

When it comes to storage, unfortunately the world of expandable SD cards are simply just not a thing anymore. While you get the option of either 64 or 128GB, once you’ve maxed it out you’re going to be playing the memory delete game. It now features Bluetooth 5.0 though, so your range is going to be extended a bit. It also has NFC built in, so you can use that for payments. 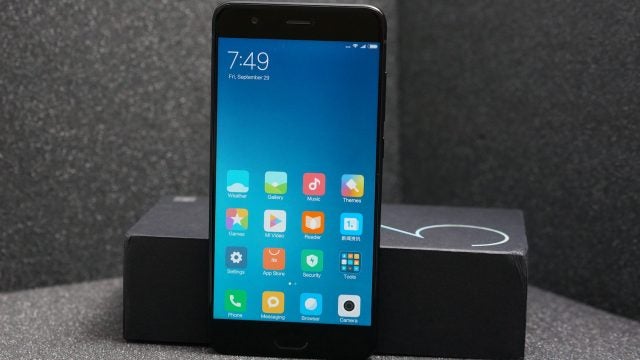 There are several ways we put the Mi Note 3 to the test, starting with the basics like gaming. While using apps give you a bit of a subjective feel for how well it works and how much the phone reacts to process and memory hungry needs, we also use several benchmark systems.

Based on the processor alone, there isn’t much of a surprise in the graphical tests from AnTuTu. For a comparison, the OnePlus 5 is only slightly more expensive, but has a superior processor and slightly improved GPU. With that said, besides the price point, it’s an apples to oranges conversation so we’ll leave it at that. When you actually play a game or watch a video though, in most cases you won’t see a crazy amount of lag. During the tests, you will absolutely see how much the phone is strained, but that is also by design.

Based on these rankings the Mi Note 3 is not exactly a top performing smartphone when compared to the current gen competitors. However, based on the benchmarked results and hands-on time with it, there did not appear to be any issues with using apps or even multitasking.

According to PCMark’s battery life test the Mi Note 3 can last beyond your typical workday, and then a few hours after (about 11 hours). On top of this it now features Quick Charge 3.0, and includes a wall adapter for it, which gives you a full days charge in about an hour and a half. 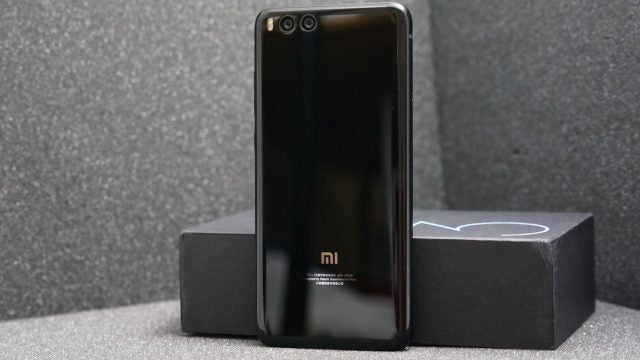 If you love selfies, you’re going to love the Mi Note 3. In Xiaomi’s devices there is built in software called Beautify mode that automatically adapts the lighting and settings to make a person look their best. Using artificial intelligence, it’ll basically rate you on a scale of 1-10, and from there decide how much beautification you need. If you turn on the Magic Mirror feature while in the selfie setting, it’ll even show you your score. In testing the feature, it basically gave me an airbrushed look to hide a zit, and balanced out my skin color. When you turn that mode off, it’s AI will recognize your face and even say what age it thinks you are. It seems pretty accurate too, so uh, say goodbye to your self esteem.

Besides the selfie action and AI powered beautification, the Mi Note 3 features dual cameras on the back and a more powerful one on the front, because selfies. On the back you’re getting two 12 MP cameras, the second is obviously designed to give you that back blur or portrait mode; and on the front you get a 16 MP so you can take the best possible selfies.

Overall the photo and video experience on the Mi Note 3 is great. You get top of the line cameras on the back, a new portrait mode, and a souped up camera for selfies. There is absolutely no lag when it comes to shutter speed or triggering the camera app, which means you won’t be telling your friends to make that face again or hoping your dog quits squirming long enough to get a shot.

Images have been scaled down 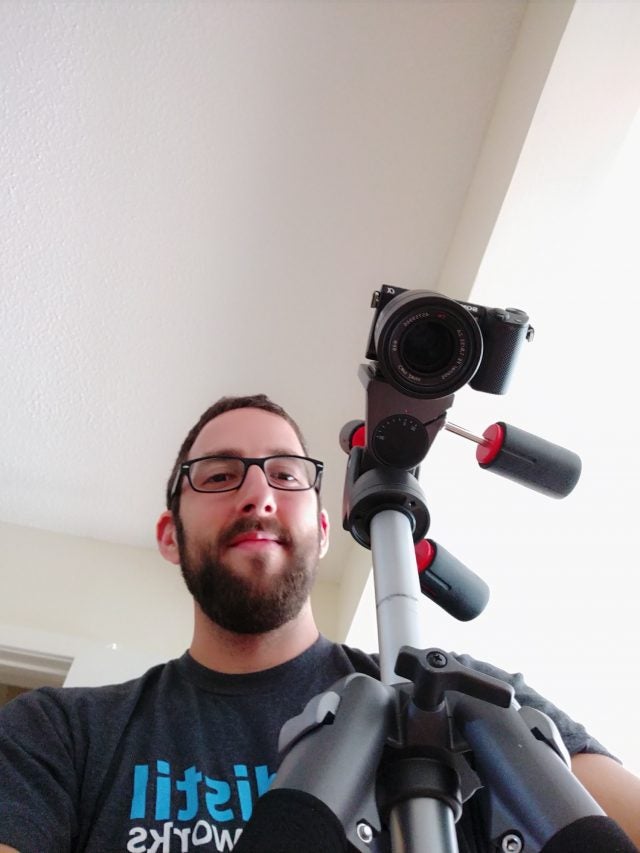 Selfie with Beautify on. The effect cheapens the shot, making you look sort of cartoon-ish 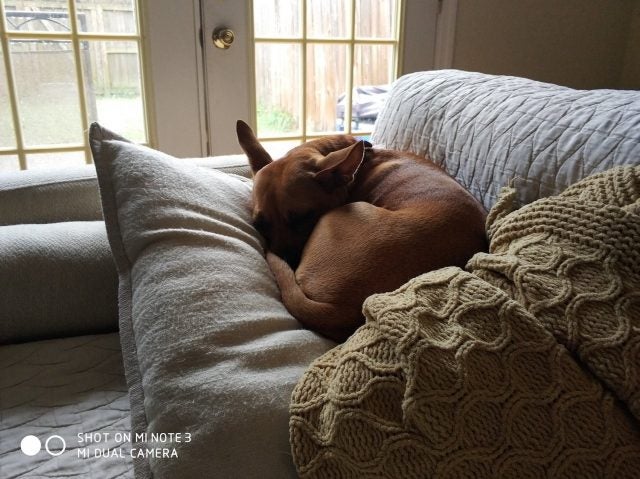 Photo with HDR on 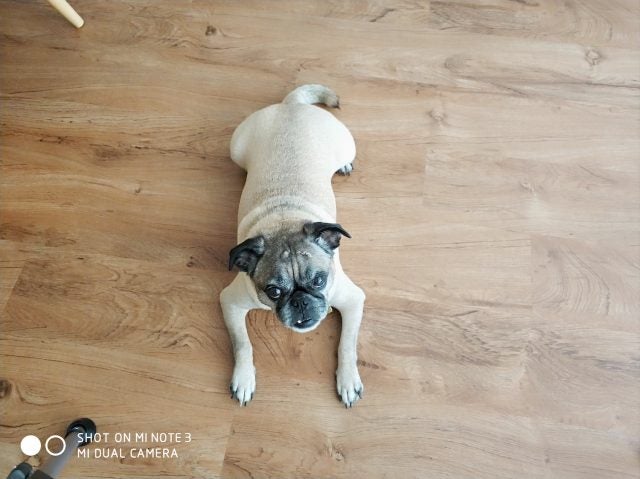 If you’re down with cutesy stuff with an anime twist, you’ll dig the MIMU operating system. If not, plan on rooting the phone and using a stock version of Android. The other issue is that if you are only an English speaking person such as myself, you’re going to hit some snags while trying to navigate around some of the stock apps because they are in Chinese. That said, it doesn’t take long to figure out the basics, and there is a good chance if you are interested in the Mi Note that it’s not unfamiliar territory for you. There are really only two downsides to their offering: bloatware and non-native Google Play Services.

Most of the junk bloatware that is on the phone can be tossed, but the part that I can’t get past is the lack of native access to Google Play Services. The OS is clearly built on top of Android 7, so the only reason for locking it out is to direct people back over to their own versions of the app store, browser, etc.

The Mi Note 3 is a very slippery, fingerprint-prone smartphone. On the front you get Gorilla Glass 4, but on the back you get a slick glass material that is perfectly designed for sliding right out of your pocket. It seems that Xiaomi knew this going into it because the phone actually comes with a super thin silicon type cover that prevents the issue from occurring. With that said, although the Mi Note 3 is in name a predecessor to the Mi Note 2, comparatively design-wise it is more like the Mi 6 that came out earlier this year. Physically the only difference between the two is that the Mi Note 3 got a larger screen. It also ditched the headphone jack in an effort to make it water resistant.

As for physical buttons, it has your standard power button and volume control on the right side, but unfortunately it lacks a silence or do not disturb switch. You can hold down the power button to quickly navigate to that, but it’s less intuitive. As for the home button, which includes the touch-ID, it is incredibly fast. There is absolutely no noticeable lag between placing your thumb on the sensor and it unlocking.

Unlike most dual lensed smartphones, the Mi Note 3 does not have a protruding camera. However, if you compare it to the OnePlus 5, it’s thicker in general, which allows the Mi Note 3 to hide the full camera within it. 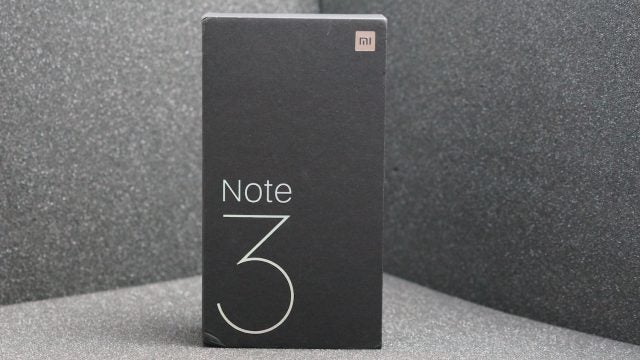 The Mi Note 3 took another slight hit in the resolution department. Due to it’s standard LED screen (rather than OLED or AMOLED), you’re going to get decent resolution and 3D graphics, but the color contrasts are not going to be as rich. When compared to the likes of the latest iPhones or the OnePlus, there is a noticeable difference in quality and richness of colors.

Overall you’re still getting a high quality experience with both the larger display and resolution, but if you’re going to be taking photos, especially all those fancy beautified selfies, you may not have the best environment for editing them.

So, should you buy the Mi Note 3? If you’re big into the world of Xiaomi smartphones and have a need for dual sims, certainly. For most of us in the US, the MIUI OS is probably more hassle then you’ll want to deal with for the cheaper price point, so it probably won’t be for you.

With that said, this is a perfectly reasonable device, if not a bit more than that, considering how much it costs and what it has to offer. I would imagine the lack of a headphone jack will be a bit of a deal breaker for some, especially when the water resistance rating is only up to splash (you can’t drown it), but it is a step in the right direction and truly all smartphone brands are doing away with it. Based on the pricing, offering, specs, and your typical U.S perspective we are giving the Mi Note 3 a 3.8 out of 5.

Where to buy: Gearbest