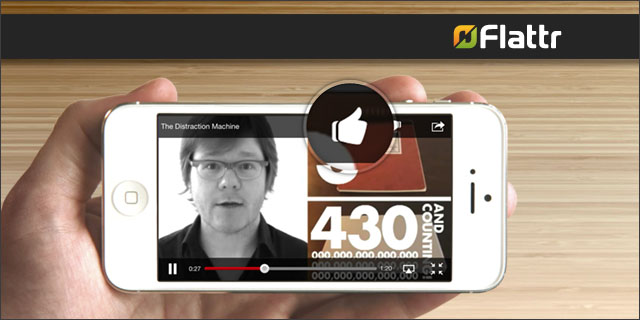 As of now, you can read ten articles on the New York Times’s website before hitting a $15/month paywall. The Financial Times and the Wall Street Journal have taken similar approaches, hoping that readers will replace their canceled print subscriptions with affordable digital ones.

But paywalls can drive new visitors away, before you earn their loyalty:

“Paywalls sort of limit your success. You can only be so successful with them, because what it’s doing is it’s preventing your potential readers from being able to access your site,” says Evan Schoepke, business development manager at Flattr.

In place of a paywall, he and his team are building a tip jar, of sorts. You just go about your business, liking and favoriting content you appreciate. Each month, your chosen monthly budget (say, $10) is split up among all the creators you “Flattred” (minus a 10 percent fee). Right now, the service works automatically on Instagram, Vimeo, YouTube, and other sites. (You can turn that off, or use the Flattr browser extension if you want to Flattr more selectively.)

Flattr was cofounded in 2010 by Peter Sunde, cofounder of The Pirate Bay. One of his goals is to create a more open Internet, where content isn’t hidden behind paywalls or subscriptions.

“People have to create all sorts of paywalls, and censorship, and all sorts of impediments to sharing in order to get money,” says Schoepke. As their site reads, “Supporting creators is the way to enable more content to be free and open.”

Micropayments have been proposed as the solution to newspapers desperate for revenue, but their problem is “friction.” Entering your credit card details on every website you read is enough to send most people straight to the free content. Flattr does require credit card or PayPal details, but you enter them only once and they work across a multitude of sites.

In fact, the Swedish company has hundreds of thousands of users, including The Oatmeal's Matthew Inman, Wikileaks, and the World Wildlife Foundation (nonprofits get to keep the 10 percent fee). News sites like Brain Pickings and Techdirt also use it. Flattr hopes to capitalize on their popularity in Sweden and Germany and eventually go mainstream. But last week, Twitter blocked them from counting favorites as Flattrs, saying it violated terms of service to not receive money for tweet actions. And Flattr has yet to integrate with Facebook for fear of similar conflicts.

Tipping for news content isn't guaranteed to generate as much revenue as digital subscriptions, but what it will generate is goodwill – and that may be even more valuable to newspapers fighting for their lives.